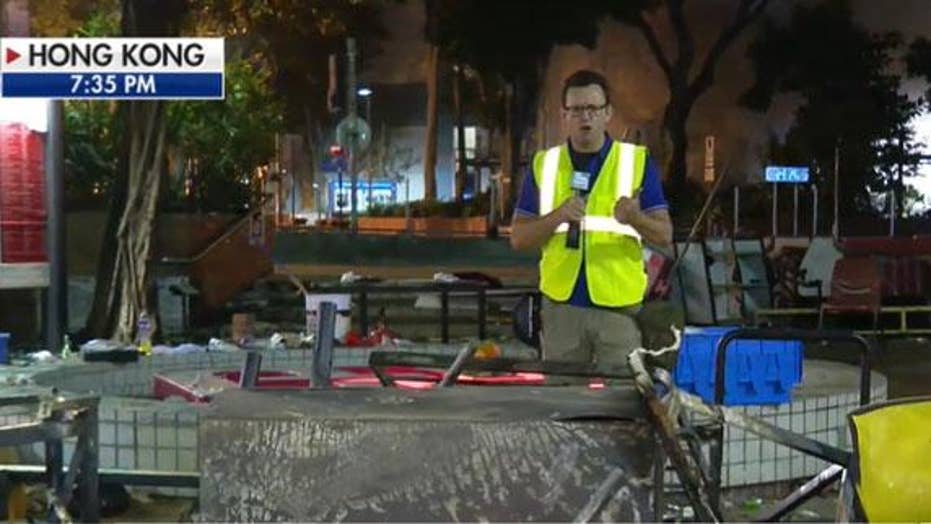 A former employee of Britain’s consulate in Hong Kong revealed Wednesday that he was tortured, shackled and forced to sing the Chinese national anthem during a grueling two-week detention in the mainland.

The claims from Simon Cheng, who had been taken into custody by Chinese officials at the conclusion of a business trip in August, come as only a few dozen anti-government protesters remain inside the campus of Hong Kong’s Polytechnic University, where police and demonstrators have been engaged in fierce clashes over the past few days.

“I was blindfolded and hooded during the whole torture and interrogations, I sweated a lot, and felt exhausted, dizzy and suffocated,” Cheng wrote in a Facebook post, according to the Associated Press.

A supporter of Simon Cheng holds a poster outside of the British Consulate in Hong Kong in August during a rally in support of him. (AP)

He added that he was chained to an X-shaped frame by plainclothes and uniformed agents as they sought information on activists involved in the ongoing protests and the role they believed Britain played in the demonstrations.

Cheng worked for the consulate as a trade and investment officer with a focus on attracting Chinese investment in Scotland. That required him to travel frequently to mainland China and he was detained at the border with Hong Kong after returning from a one-day business trip.

China has long accused “anti-China foreign forces” of encouraging the protests, which have grown increasingly violent, without providing direct evidence.

Cheng wrote that while being held he was shuttled between detention and interrogation centers. In addition to being shackled to the frame, he wrote he was ordered to assume stress positions for “countless hours,” and was beaten with what felt like “sharpened batons” and poked in the knee if he faltered. He was also punished for dozing off during the sessions by being forced to sing the Chinese national anthem.

Police officers watch as workers clear the road in front of the Polytechnic University in Hong Kong on Wednesday. (AP)

In an interview with the BBC, Cheng – a Hong Kong citizen – said he had volunteered for a role with the consulate to “collect information about the status of the protests” prior to his detention.

Cheng revealed that he joined social media groups that the protesters used to coordinate their actions and then reported his findings back to consulate staff. He also said that during his business trip, he visited the relatives of a mainland Chinese friend who was arrested in the Hong Kong protests to collect money for his living expenses.

Chinese police in August announced Cheng’s release after 15 days of administrative detention --but gave no details of the reasons behind his capture.

Cheng, in his Facebook post, said the interrogators expected him to confess that Britain had instigated the protests by donating money and materials, that he personally led that effort and paid the bail of mainland participants.

Cheng said he refused but confessed – under coercion -- to a minor offense of “soliciting prostitution” in order to avoid harsher treatment and a heavy sentence on national security charges. Some of the officers holding him said they could “abduct” him back to the mainland if he didn’t “behave,” he said.

A police officer gestures to medics helping protesters leave the grounds of the Polytechnic University in Hong Kong on Wednesday. (AP)

One interrogator speaking Hong Kong’s native Cantonese dialect cursed him, saying, “How dare you work for the British to supervise Chinese,” while another speaking in a northern Mandarin accent told him they were from China’s secret intelligence service and that he had “no human rights in this place,” Cheng wrote.

He no longer works at the consulate and has since fled to a third country, the Associated Press reported.

Police in Hong Kong may be planning a final operation to storm Hong Kong Polytechnic University and flush out the remaining student protesters; Jonathan Hunt reports from the scene.

Cheng’s claims drew an angry response from Britain, which summoned the Chinese ambassador in London Wednesday to demand Beijing investigate.

“I summoned the Chinese Ambassador to express our outrage at the brutal and disgraceful treatment of Simon in violation of China’s international obligations,” British Foreign Secretary Dominic Raab said in a statement. “I have made clear we expect the Chinese authorities to investigate and hold those responsible to account.”

Ambassador Liu Xiaoming, in response, will “by no means accept the so-called concerns or complaints raised by the British side,” Chinese Foreign Ministry spokesman Geng Shuang said.

“The Chinese ambassador to the U.K. will lodge the complaints with the U.K. to express our strong opposition and indignation to the U.K.’s wrong words and deeds on Hong Kong in these days,” Geng added.