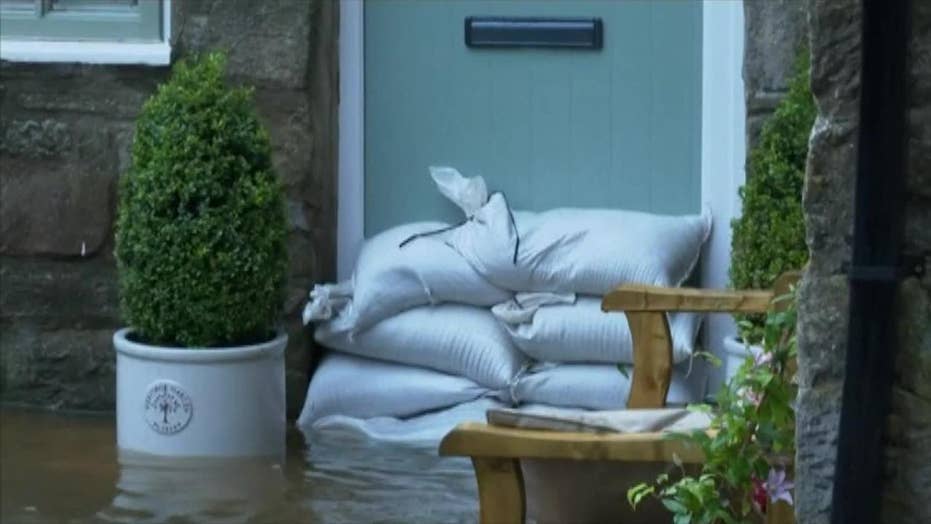 Locals use sandbags to protect their homes as floodwaters rush in following massive rainstorm.

A “raging torrent” of rain and hail battered parts of the United Kingdom on Tuesday, washing out roads and damaging structures.

More than an inch of rain inundated North Yorkshire in just a span of hours, the UK’s Met Office wrote on Twitter. Roads were washed out across the region, and a road bridge collapsed near Grinton.

"The roads were a raging torrent and there were sheds and household oil tanks floating down them," Steve Clough of Swaledale Mountain Rescue told Sky News.

A man looks from the edge of a collapsed road bridge near Grinton, North Yorkshire, after parts of the region were inundated by overnight rain. (Danny Lawson/PA via AP)

A couple climbed 100 feet up a coastal cliff to escape the sudden tide surge at a beach in Filey Brigg Tuesday afternoon, the BBC reported. The man and the woman were found “clinging on by their fingertips” when rescuers arrived. The pair didn’t suffer any injuries, officials told the outlet.

Meanwhile, floodwaters swept through the streets of Bellerby as citizens defended their homes with sandbags. Rescue workers were seen helping a child over the rushing water.

Gareth Walls, of Ripon, described the hail that pummeled the region as “like pickled onion,” and posted a picture of a large hailstone in the palm of his hand.

The Met Office said Wednesday that rain and “thundery downpours” could continue in some places.

Britain has been getting wetter, according to the Met Office’s U.K. Climate report, with 13% more summer rain falling in the 21st century than the 20th.