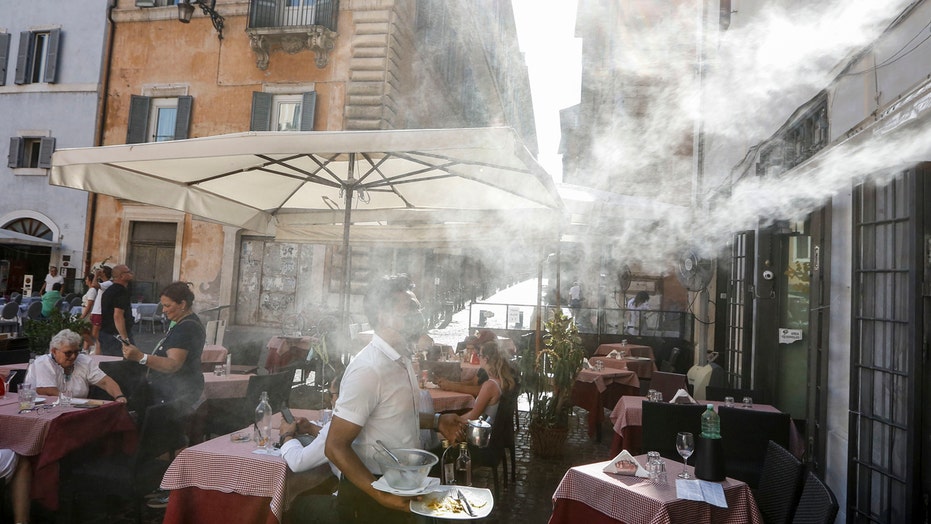 Relief is finally arriving Sunday from a heat wave that sent temperatures soaring across western Europe at the end of last week, breaking records in Spain.

San Sebastian on Spain's northern coast saw temperatures of 107 degrees Fahrenheit on Thursday -- the hottest temperature there since records began in 1955, the national weather agency said.

The city of Palma, on Spain's Mediterranean island of Mallorca, set a local record of 105 degrees on Tuesday.

The U.K.'s Met Office said it was the hottest day of 2020 and third-hottest on record for the country.

Communities along the British coast expressed concern about visitors trying to beat the heat, after previous bouts of hot weather drew large crowds to beaches.

Optical effects caused by the heat on a road on a hot summer afternoon in Rome, Saturday, Aug. 1, 2020. (AP Photo/Alessandra Tarantino)

The city council in Brighton, on England’s south coast, appealed for visitors to stay away, saying it was “concerned about the number of people in the city.”

A sunbather checks her smartphone on a hot day of summer in Rivas Vaciamadrid, Spain, Wednesday, July 29, 2020. (AP Photo/Manu Fernandez)

In Italy, more than a dozen Italian cities were put on alert as temperatures peaked around 104 degrees on Friday and Saturday.

Tourists and residents in Rome tried their best to escape the sweltering conditions by staying in the shade and cooling down in public fountains, according to Sky News.

Many said the searing heat made it more difficult to wear face masks to prevent the spread of coronavirus.

“Your breath gets very warm — your glasses, there are lots of problems,” Ana Gonzalez told Reuters. “But you put it all aside when you think that it’s protection and there’s no choice about wearing it. You forget about the face mask and that’s it. It’s the only way. At least, that’s what I do.”

The Spanish weather agency, Aemet, said tropical nights — when temperatures do not fall below 68 degrees Fahrenheit — were also frequent in many parts of Spain in July.

“Climate change is increasing the frequency of heat waves,” it said, adding that the annual number of days in heatwave conditions has doubled since the 1980s.