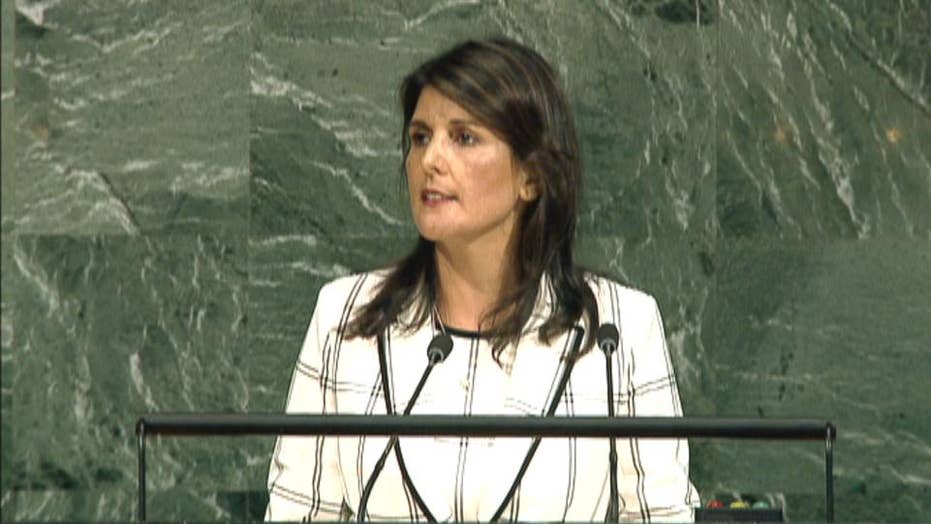 United States ambassador to the UN speaks at the 72nd session of the United Nations General Assembly.

United States U.N. Ambassador Nikki Haley told reporters that President Trump’s “deal of the century” in solving the Israeli-Palestinian situation can happen but only if Palestinian Authority President Mahmoud Abbas agrees to it. Haley was speaking to reporters at a press conference marking the United States presidency of this month’s U.N. Security Council.

Haley in response to a question if the deal of the century was attainable said, “Only if Abbas comes to the table. We have ensured that (Prime Minister of Israel Benjamin) Netanyahu will come to the table. Abbas, for the good of his people, needs to come to the table.” The Palestinian leadership cut off all contacts with the Trump administration when the U.S. recognized Jerusalem as Israel’s capital in December.

While many critics of the Trump administration have claimed there is no peace plan, Haley said she had read it, but told reporters that it would not be rolled out during this month’s United Nations General Assembly debate when Trump and other world leaders will address the global body.

“I can tell you that (White House senior adviser) Jared Kushner and (Trump’s special envoy for international negotiations) Jason Greenblatt have done unbelievably detailed work in it. I have read the plan. It is thoroughly done. It is well-thought-out from both sides, the Palestinians and the Israelis.”

She continued, “The president’s full intent is to completely do everything he can with the peace plan.”

Haley, who has made defending close U.S. ally Israel a top priority at the U.N., told reporters that Abbas must do more to help the Palestinian people.

“I will tell you again, for the good of the Palestinian people, the region, the international community, we have to put pressure on Abbas, and say, it’s time. It’s time for a better life for Palestinians. And only he can deliver that. And we have to acknowledge that Hamas is part of the problem.”

As for United Nations Relief and Works Agency for Palestine Refugees in the Near East (UNRWA), the agency that the Trump administration cut all funding to last Friday, Haley criticized it for being a political organization.

She said the U.S. up until last year had given had given $6 billion to the Palestinians.

“UNRWA is a political arm that claims to serve Palestinians. We have, for two years, asked UNRWA to reform itself because it has this ongoing number of refugees that is unsustainable. We can’t sustain — and the world knows. Everybody knows it. Every year, they come and say the schools aren’t going to open. But they keep adding numbers of refugees to where we’re never going to be able to sustain that.”

Haley noted that the U.S. was not cutting aid to the Palestinians — just UNRWA. She called upon other countries in the region to put their money where their mouth is.

“Don’t blame us for cutting aid. Don’t blame us for saying that we think UNRWA is political, and that it needs to be reformed. If you think it’s fine, go: you pay for it. But don’t blame the United States for a faulty political organization that I don’t think is doing justice to the people of the Palestinian community.”

Haley also outlined the U.S. plans for its Security Council presidency for the month of September. That includes Trump chairing a meeting of the U.N. Security Council on Iran. The meeting will address Iran’s continued violations of international law, and the Islamic regime’s meddling throughout the Middle East. Haley said she would not oppose Iranian President Hassan Rouhani attending the meeting.

Asked whether the Trump administration had a strategy for Iran, and if that included regime change, Haley told reporters that the administration’s strategy was very simple.

Haley said that, “We’re going to stand with the Iranian people. This is not about a regime change, and who’s the next leader. This is everything about standing with the Iranian people, and say they have every right to be heard in their government, and they have every right to change it if it’s not being led the right way. And we’re going to continue to expose all the violations that Iran does. And we think the international community should join us with that because it is an issue for the future and it is a future — an issue that affects every country in the world.”

Trump also will preside over a meeting to counter narcotics. Haley said the issue is very important to him, and is a topic that has hit nearly all countries in the world. At that meeting, the president will issue a global call to action to the world leaders assembled in New York.