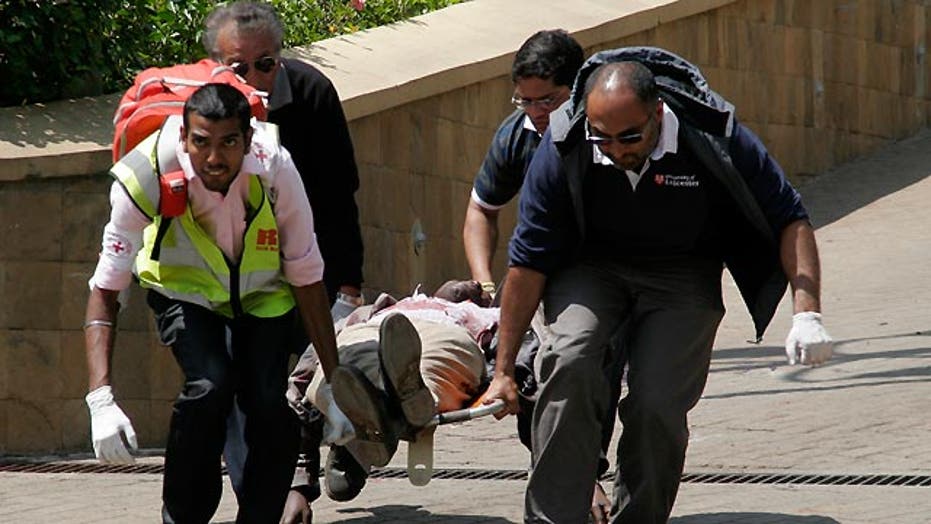 Gunshots rang out from an upscale mall in Kenya's capital Wednesday morning, a day after the country's president said his military had “ashamed and defeated” Al Qaeda-linked terrorists in an apparent end to a four-day standoff and hostage situation inside the popular shopping center.

But a top security official, speaking on condition of anonymity because of the sensitivity of the information, said even around the time President Uhuru Kenyatta told the nation in a televised address that "we have ashamed and defeated our attackers" on Tuesday night, three shots rang out at the mall.

He said Kenyan authorities are still trying to determine where those shots came from.

Kenyatta said in a national address Tuesday that 61 civilians and six security officers were killed in the violence at Nairobi’s Westgate Mall, and called for three days of national mourning beginning Wednesday.

Kenyatta added that three floors of the mall collapsed and that there are "several bodies still trapped in the rubble, including the terrorists."

FBI investigators are now waiting for forensic evidence, including fingerprints taken from inside the mall as well as dental records, to verify claims that some of the attackers were Americans, a federal law enforcement source told Fox News.

Kenya's foreign minister, Amina Mohamed, claimed in a television interview Monday that two or three Americans and one Briton were among those behind the attack.

Amina Mohamed said in an interview with PBS' "NewsHour" program that the Americans were 18 to 19 years old, of Somali or Arab origin and lived "in Minnesota and one other place" in the U.S. The attacker from Britain was a woman who has "done this many times before," Mohamed said.

On Sunday, Homeland Security and the FBI sent out a joint bulletin to federal, state and local law enforcement agencies after the militants stormed the mall a day earlier, sources told Fox News. The bulletin emphasized the continuing threat of al-Shabab -- the Somali-based terror group who claimed responsibility for the attack -- but did not advise any changes to security inside American malls.

Earlier Tuesday, al-Shabab said its fighters were still holding out inside the mall, despite claims from Kenya that said otherwise.

“There are [a] countless number of dead bodies still scattered inside the mall, and the mujahedeen are still holding their ground,” al-Shabab wrote on its Twitter account.

In a Tweet Wednesday from an account believed to be genuine, al-Shabab also claimed that Kenyan government forces used explosives in carrying out "a demolition" of the building, burying 137 hostages.

The group also claimed that "having failed to defeat the mujahideen inside the mall, the Kenyan govt disseminated chemical gases to end the siege."

The group’s previous Twitter accounts had been shut down, according to Reuters.

Authorities said Tuesday they were involved in a final push to clear out the remaining attackers, who were holding hostages. But with the building cordoned off and under heavy security, it was not possible to immediately verify the assertions.

"Troops now in mop up operations in the building," a Kenyan police tweet said on Tuesday. On Monday night, Kenyan officials said they were “in control,” according to Reuters.

Explosions and more gunfire were heard coming from the mall Tuesday, while a plane and helicopter circled over the building.

Kenyan officials say three soldiers have died and eight others were injured in the assault on Tuesday. Federal law enforcement sources told Fox News that the terrorists used explosives.

While the government announced Sunday that "most" hostages had been released, at least 10 were still being held earlier Tuesday by a band of attackers described as "a multinational collection from all over the world," a security expert with contacts inside the mall told The Associated Press.

On Monday, sources told Fox News that Kenyan security forces battled what was believed to be 10 to 15 gunmen hiding on the top floor of the mall for several hours, neutralizing most of them.

A government official said Tuesday that Nairobi's morgue is also preparing for the arrival of a large number of bodies from the mall. Morgue employees were dressed in smocks early Tuesday, though no bodies had been delivered. A city resident whose brother took part in the military operation inside the mall said there were many dead bodies still inside.

Both the government official and the Nairobi resident insisted their names not be used so they would not face retribution from officials.

A U.S. Embassy vehicle, identifiable by its numbered diplomatic license plate, arrived at the morgue on Tuesday. American officials have not confirmed the deaths of any U.S. citizens in the mall attack, but it appeared possible the Americans who visited the morgue could have been seeking information about one of the bodies inside.

Mohamed's statement about the alleged nationalities of the attackers also fueled speculation that a 29-year-old woman named Samantha Lewthwaite was involved in the attacks. Lewthwaite, a native of Buckinghamshire who converted to Islam at age 15 and was believed by Western intelligence agencies to be in East Africa, is the widow of Germaine Lindsay, one of the perpetrators of the July 7, 2005, suicide attacks on London's transport system during the morning rush hour. British security sources contacted by Reuters said that Lewthwaite's involvement in the attack was possible, but cautioned that no definitive information had been received.

In the initial Saturday attack, the militants specifically targeted non-Muslims, and at least 18 foreigners were among the dead, including six Britons, as well as citizens from France, Canada, the Netherlands, Australia, Peru, India, Ghana, South Africa and China. Five Americans were among the nearly 200 people wounded in the attack.

The al-Shabab terrorist group – which is estimated to have several thousand fighters -- grew out of the anarchy that crippled Somalia after warlords ousted a longtime dictator in 1991. Its name means "The Youth" in Arabic, and it was a splinter youth wing of a weak Islamic Courts Union government created in 2006 to establish a fundamentalist Islamic state in the East African nation.

Al-Shabab said it attacked the mall as retaliation for Kenya's involvement in a crackdown on Islamic militants in neighboring Somalia.