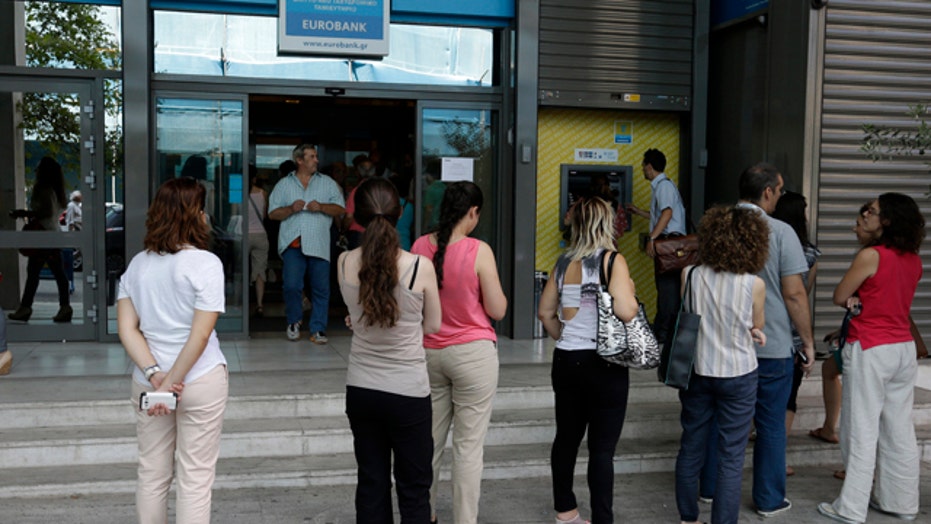 Greece facing the prospect of disorderly exit from the Euro

BRUSSELS – Frustrated and angry eurozone leaders fearing for the future of their common currency gave the Greek prime minister a last-minute chance Tuesday to finally come up with a viable proposal on how to save his country from financial ruin.

Overcoming their surprise when Alexis Tsipras failed to present them with a detailed reform blueprint, the leaders reluctantly agreed to a final summit on Sunday, saying the days leading up to it could give both sides an opportunity to stave off collapse of the struggling but defiant member nation.

Underscoring the gravity of the challenge, European Union President Donald Tusk decided to call all 28 EU leaders to Brussels, because, for the bloc, it "is maybe the most critical moment in our history."

French President Francois Hollande insisted much was at stake. "It's not just the problem of Greece — it's the future of the European Union," he said.

Highlighting the rising anger with Tsipras over months of foot-dragging and surprising negotiating twists, European Commission President Jean-Claude Juncker had a stark warning for Greece.

"We have a Grexit scenario, prepared in detail," he said, apparently referring to the situation in which Greece would be forced out of the currency union.

Speaking to reporters late Tuesday, Tsipras made it clear he had gotten the message that there wasn't a moment to waste as deadlines for debt payments that Greece cannot afford draw near.

"The process will be swift, it will be speedy, it will begin in the next few hours with the aim of concluding until the end of the week at the latest," Tsipras said.

According to a joint statement of the leaders, Tsipras must set out Greece's proposals in detail for a reform agenda by Thursday. The country's international creditors will then assess the plan to prepare for another meeting of eurogroup finance ministers and ultimately Sunday's summit of the full EU.

Often such detailed plans have fallen by the wayside amid political bickering between Greece and its creditors.

Greece's eurozone partners have steadfastly said they want to help Greece stay in the currency club but have just as often complained about Greece dragging its feet during months of negotiations.

"At a certain point, you need to get to the truth," said Belgian Prime Minister Charles Michel, before asking: "Is there, yes or no, a political will of the Greek government?"

"You know, there was a promise for today. Then, they're promising for tomorrow," said Lithuanian President Dalia Grybauskaite. "For the Greek government it's every time 'manana.'"

Tsipras arrived in Brussels buoyed by a triumph in last Sunday's referendum, where an overwhelming majority of Greeks backed his call to reject the belt-tightening reforms that creditors had last proposed.

But that domestic victory did not appear to give him much leverage in talks with foreign creditors, who know Tsipras needs a deal soon to keep his country afloat. Banks have been shut since last week and will not reopen before Thursday, cash withdrawals have been limited for just as long, and daily business throughout the country has come to a near standstill.

In his flurry of contacts, Tsipras spoke by phone with President Barack Obama, and the White House said it was in Europe's interest to reach a resolution that puts Greece on the path toward economic growth and stability.

One big sticking point in the talks is Greece's demand that the terms of its bailout loans be made easier.

European officials are split on the issue, with lead eurozone lender Germany still reluctant. The International Monetary Fund called last week for European states to accept longer repayment periods and lower interest rates on their loans to Greece. Many economists say that Greece's debt burden, at almost 180 percent of annual GDP, is unsustainable for a country its size.

Normal commerce is now impossible in Greece. Small businesses, lacking use of credit cards or money from bank accounts, were left to rely on cash from diminishing purchases from customers, as Greeks hold on tight to what they have. And suppliers are demanding that businesses pay cash up front.

The lack of progress on Greece worried stock markets in Europe, where the Stoxx 50 index of top companies was down 2.1 percent on Tuesday. The euro also fell, while Greece's stock market remained shut since last week amid the bank closures.

Greece has been granted two bailout programs worth a total of 240 billion euros ($266 billion) in loans from other eurozone countries and the International Monetary Fund. But the spending cuts and tax increases demanded as a condition for the loans have hit growth, sending the country into a six-year recession and pushing unemployment to 25 percent. The government, meanwhile, has been slower than hoped in making the economy more competitive and selling state assets to raise money.

"The situation is really critical and unfortunately we can't exclude this black scenario — I mean no agreement until Sunday," Tusk said.