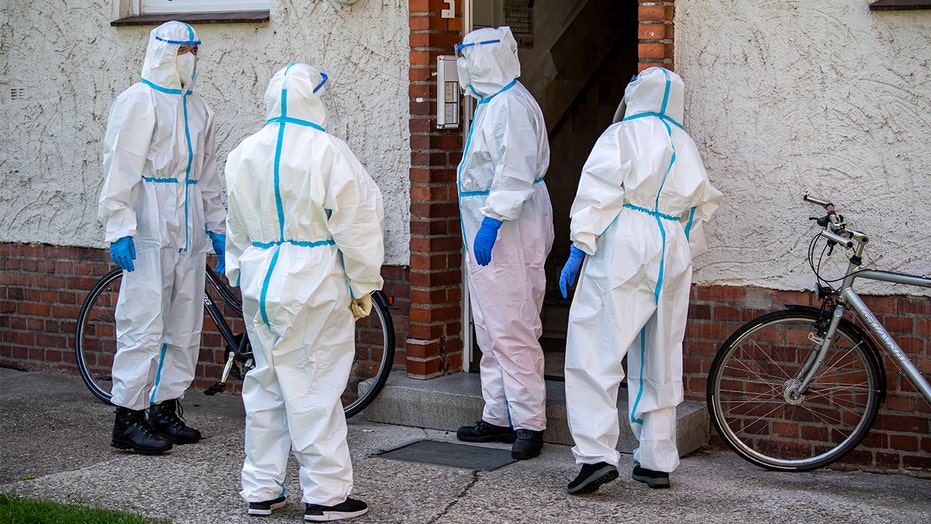 A German county reentered quarantine for at least a week after more than 1,000 new coronavirus infections linked to a slaughterhouse were discovered.

Gov. Armin Laschet of North Rhine-Westphalia state said people in Guetersloh county will revert back to social distancing measures and limitations on public gatherings – similar to the beginning of the coronavirus pandemic – after more than 1,550 people tested positive for COVID-19 at the Toennies slaughterhouse in Rheda-Wiedenbrueck.

Authorities said that despite the initial tally, they are still working to verify the exact number of infections.

The slaughterhouse has been closed and some 7,000 employees are under quarantine and will be tested for the virus, officials said.

“We will order a lockdown for the whole of Guetersloh county," Laschet told reporters on Tuesday. “The purpose is to calm the situation, to expand testing to establish whether or not the virus has spread beyond the employees of Toennies.”

"We will get a better picture of the situation through intensive testing, and can then see more clearly within seven days what the situation is,” he said.

The governor slammed Toennies Group – a family-owned company and Germany's biggest meat processing company – for its handling of the outbreak. He said they could have been more forthcoming in providing authorities with information to help identify and isolate the virus.

Toennies is also under fire for using subcontractors, many of whom are migrants from Eastern Europe, to work in the plant. These workers are often housed in cramped conditions and transported to the meat plants in minibuses, which heighten the likelihood of spreading the coronavirus.

Although the practice is common in the meat industry, the German government is now looking to ban it.

Mobile teams testing people on the coronavirus are instructed on a meadow of a fire station in Rheda-Wiedenbrueck, Germany, Tuesday, June 23, 2020 . The mobile teams from the German Federal Armed Forces and aid organizations are formed to visit and test people in quarantine throughout the Guetersloh region. (David Inderlied/dpa via AP)

In neighboring Warendorf county, where many Toennies workers also live, lockdown restrictions will also be implemented, the state government said. Guetersloh county has about 360,000 residents and Warendorf has 277,000.

Laschet stressed the importance of containing the virus before it spread to other parts of Germany.

Movie theatres, gyms, schools and daycare centers will be closed, while restaurants and stores may only serve customers from the same family.

Germany has seen over 8,900 confirmed deaths linked to the virus and about 192,000 cases. The country has fared well in its handling over the virus in comparison to Britain, which had a death toll that was five times as high.