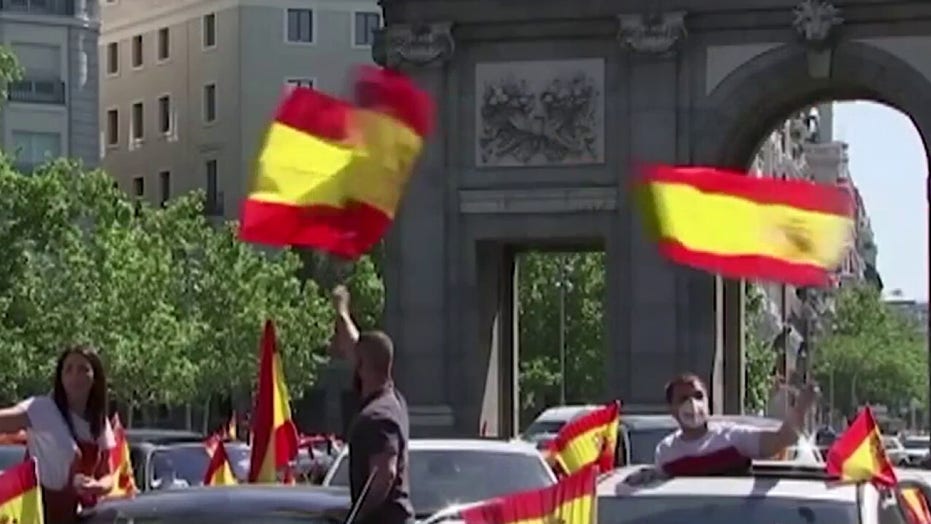 Amy Kellogg has an update from Milan, Italy.

Germany is scrambling to contain an outbreak of the coronavirus linked to a large slaughterhouse where more than 1,300 people have tested positive for COVID-19.

Chancellor Angela Merkel’s spokesman said, “Everything needs to be done.”

Steffen Seibert said 20 workers at the Toennies meat plant in the western Guetersloh region have been hospitalized and several are in intensive care.

“We very much hope that all those who have fallen ill survive,” Seibert told reporters in Berlin on Monday. “This is an outbreak that needs to be taken very seriously.”

Members of German Red Cross (DRK) stand in front of a house where employees of the Toennies meat factory live in Rheda-Wiedenbrueck, Germany, Monday, June 22, 2020. About 40 mobile test teams are on the road that day to visit employees of the Toennies company at home in their quarantine. Hundreds of new coronavirus cases are linked to the large meatpacking plant, officials ordered the closure of the slaughterhouse, as well as isolation and tests for everyone else who had worked at the Toennies site — putting about 7,000 people under quarantiner. (David Inderlied/dpa via AP)

Authorities have dashed to stop the outbreak from spreading, by ordering mass tests of all workers and putting thousands of people into quarantine.

The outbreak at Toennies, where many workers are migrants from Eastern Europe, has pushed up Germany’s daily infection rate.

Company officials at Toennies said the outbreak at the slaughterhouse may have been linked to workers taking the opportunity to visit their families in eastern European countries as border controls were relaxed.

There have been several outbreaks at German slaughterhouses in recent weeks, prompting the government to impose stricter safety rules for the industry and ban the practice of using sub-contractors.

WEISSENFELS, GERMANY - MAY 14: A general view at the Toennies slaughterhouse and meat processing plant on May 14, 2020 in Weißenfels, Germany. Meat processing plants across Germany are conducting Covid-19 testing of employees nationwide following an outbreak of several hundred infections at a plant in western Germany recently. Many of the plants employ workers from eastern Europe who live in close quarters in dormitories and are hence at a higher risk of infection. (Photo by Jens Schlueter/Getty Images)

Gereon Schulze Althoff, the Toennies official in charge of the company’s pandemic response, noted that many foreign workers had wanted to go and see their families as European borders started to reopen, meaning that “we were exposed to new risks.”

“We were aware of that, but we ... carried out extra testing of people returning from holidays and so on,” he added. “But we didn’t succeed in keeping out these sources or this source (of infection) — we don’t know which exactly.”

He said the company has a lot of workers from eastern European countries, and many went home over recent long weekends. He said cooled rooms may also have facilitated the virus spreading.

Germany started loosening its coronavirus restrictions in late April and has largely kept infection rates low, though local outbreaks linked to slaughterhouses, church services and a restaurant among other places have caused some concern.

The outbreak could affect the meat supply in Germany.

Authorities have dispatched virologists, contact-tracing teams and the German army to help contain the outbreak.