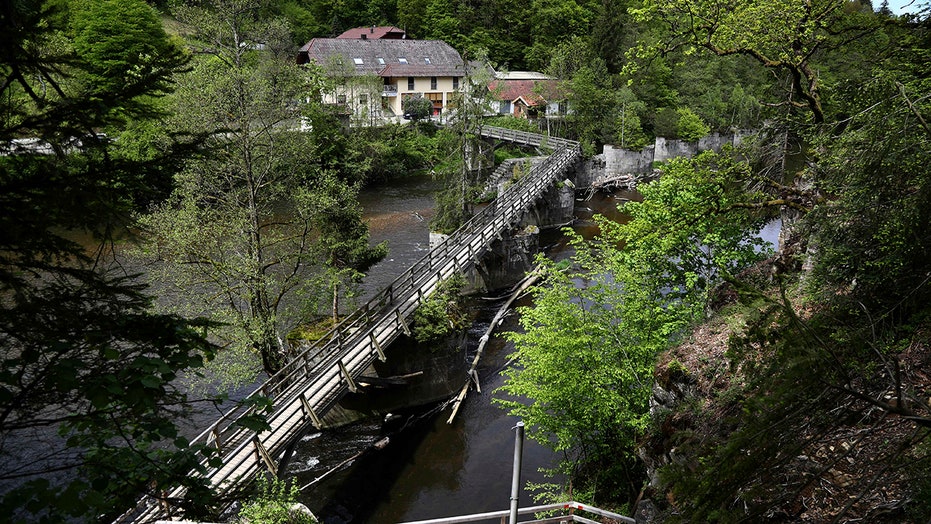 The three people killed by crossbow arrows inside a German hotel room were medieval combat enthusiasts and their deaths have been linked to two more deaths at one of the victim’s apartments several hundred miles away.

Investigators said a 53-year-old man and 33-year-old woman – found hand-in-hand in a hotel bed in Passau, near the Austrian border on Saturday – were shot with arrows to the heart and heads. They were identified as Torsten W., and Kerstin E. Meanwhile, a 30-year-old woman, identified as Farina C., was found on the floor of the same room with an arrow in her neck.

Prosecutors said there are no signs of any struggle and that any other people were involved.

Initial evidence appears to suggest that the younger woman first shot the other two and then herself, German news agency dpa quoted a prosecutor as saying, adding that it appeared to be a case of “killing on demand” or suicide.

A guesthouse is pictured at the river 'Ilz' in Passau, Germany, Monday, May 13, 2019. Police investigating the mysterious death of three people whose bodies were found with crossbow bolts inside at the hotel in Bavaria on Saturday, May 11, 2019. (AP Photo/Matthias Schrader)

The deaths have been linked to the deaths of two women found dead Monday in the younger woman’s apartment in northern Germany, several hundred miles from Passau. German media reported that one of the two women was the partner of the 30-year-old victim.

Prosecutors said the two bodies were found at the apartment in Wittingen “because one of the neighbors heard about the reports in Passau and told police that the mailbox of the apartment was overflowing and that a strange smell was coming from [inside],” the BBC reported.

It is not clear how the two in the apartment died as officials are still awaiting autopsy results. They were not shot by crossbow arrows, the BBC reported. They have not been identified.

The three people found by a maid on Saturday had checked into the Bavaria hotel – an idyllic spot by the River Ilz that is popular with hikers – on Friday night, for three nights without breakfast, the BBC reported.

They had no luggage and only carried their crossbow bags. Three crossbows were found in the room, one still in its bag, The Local reported.

Police said they discovered the last wills of the couple inside the hotel but did not disclose any details of what was in the documents, saying the contents, as well as a white pickup truck belonging to the older woman, are still under investigation. Authorities are still looking into whether the three had consumed alcohol or drugs.

A crime scene officer arrives a crime scene where the bodies of two women have been found at an apartment in Wittingen, northern Germany, Monday, May 13, 2019. The women found dead in an apartment of one of three people who found dead on Saturday at a hotel in Passau, several hundred kilometers away in a mysterious case involving crossbows. (Christophe Gateau/dpa via AP)

It is unclear the relationship between the three victims.

Torsten had multiple tattoos on his arms of symbols of medieval alchemists or natural philosophers. It said that for the past five months he owned a shop called “Milites Conductius,” which sold medieval-style swords, axes, knives, flags, and clothing as well as mead, according to the German newspaper Bild.

At the shop, he reportedly provided a space for sword-fighting lessons, the newspaper reported.

All three were listed on a website run by the International Jousting League, based in Belgium, according to the BBC. A spokesperson said the listing merely meant they had registered as affiliates at some time in the past.

Bavarian police spokesman Stefan Gaisbauer said earlier Monday there are no indications that anyone other than those found dead were involved but that it is not yet clear what happened.

"We assume that no other people were involved in the deaths of the three," he said, adding that autopsy results were expected Tuesday.

Crossbows can be purchased legally in Germany by all people aged 18 or older.