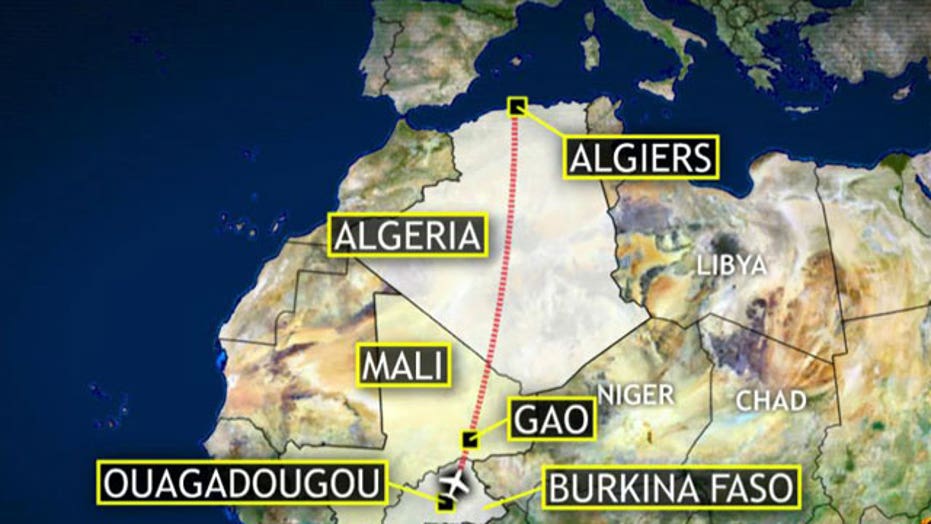 A French Ministry of Defense official tells Fox News that the Air Algerie jet carrying 116 people that vanished from radar shortly after takeoff late Wednesday night has crashed in Mali, and that two French fighter jets have located the wreckage.

The French Ministry of Defense official told Fox News that the plane went down near the Malian city of Gao, a city essentially under the control of the Malian government, though it has seen lingering separatist violence.

Swiftair, a private Spanish airline, said the plane departed Burkina Faso for Algiers at 9:17 p.m. ET Wednesday, but had not arrived at the scheduled time of 1:10 a.m. ET Thursday. Swiftair said it was unable to make contact with the plane.

"In keeping with procedures, Air Algerie has launched its emergency plan," the APS news agency quoted the airline as saying.

Burkina Faso authorities also set up a crisis unit in Ouagadougou airport to update families of people on board the plane, Reuters reports.

The flight path of the plane from Ouagadougou, the capital of the west African nation of Burkina Faso, to Algiers wasn't immediately clear. Ougadougou is in a nearly straight line south of Algiers, passing over Mali where unrest continues in the north.

The plane sent its last message around 9:30 p.m. ET, asking Niger air control to change its route because of heavy rains in the area, Ouedraogo said.

A source also told Sky News that the plane asked to divert its path “to avoid another aircraft.”

Algerian Prime Minister Abdelmalek Sellal said on Algerian state television that 10 minutes before disappearing, the pilots were in contact with air traffic controllers in Gao.

Last week, an armed Islamist group formed by Al Qaeda commander Mokhtar Belmokhtar reportedly claimed responsibility for a suicide bombing that killed a French soldier in northern Mali. In a video posted on the Internet, a spokesman for the group Al-Mourabitoun, identifying himself as Abu Assem Al-Muhajir, said the attack north of Gao, was "a response to French claims that they had annihilated the Mujahideen (Islamic fighters)".

Al-Mourabitoun was formed last year from the fusion of two Islamist groups operating in northern Mali: the Mulathameen brigade, led by the one-eyed Belmokhtar who is thought to have masterminded an attack on an Algerian gas plant last year in which nearly 40 hostages were killed, and the Movement for Unity and Jihad in West Africa (MUJWA), Reuters reports.

A senior French official told The Associated Press that it seems unlikely that these fighters had the kind of weaponry that could shoot down a plane.

The official, not authorized to speak publicly, said on condition of anonymity that they primarily have shoulder-fired weapons -- not enough to hit a passenger plane flying at cruising altitude.

Swiftair took ownership of the plane on Oct. 24, 2012, after it spent nearly 10 months unused in storage, according to Flightglobal's Ascend Online Fleets, which sells and tracks information about aircraft. It has more than 37,800 hours of flight time and has made more than 32,100 takeoffs and landings. The plane has had several owners over the years, including Avianca and Austral Lineas Aereas.

The MD-83 is part of a series of jets built since the early 1980s by McDonnell Douglas, a U.S. plane maker now owned by Boeing Co. The MD-80s are single-aisle planes that were a workhorse of the airline industry for short and medium-range flights for nearly two decades. As jet fuel prices spiked in recent years, airlines have rapidly being replacing the jets with newer, fuel-efficient models such as Boeing 737s and Airbus A320s.

There are 496 other MD-80s being flown by airlines around the world, according to Ascend