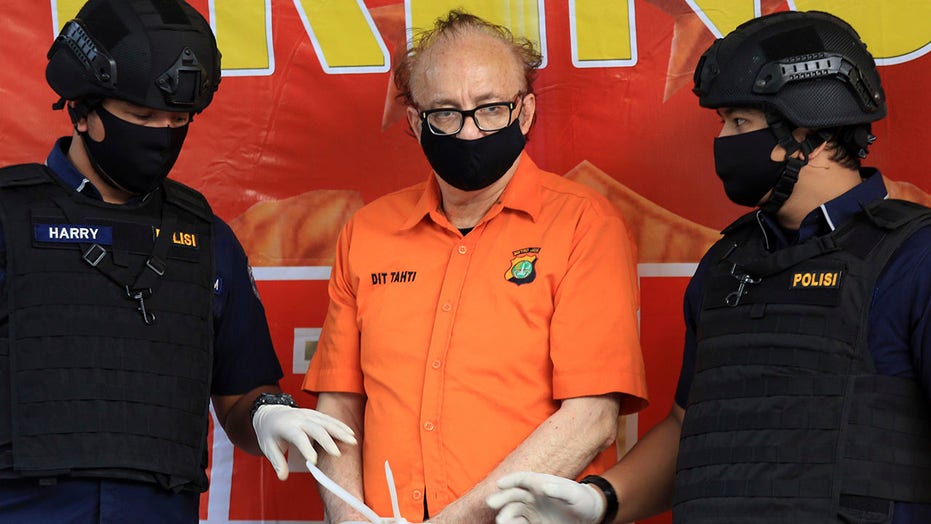 A French man accused of molesting more than 300 children in Indonesia has died by suspected suicide in his jail cell, local authorities said Monday.

Francois Camille Abello, 65, was found lying in his cell Friday with a wire wrapped around his neck, Jakarta police spokesman Yusri Yunus said. Abello died Sunday after three days in the hospital.

“His condition was stable a day afterward, but then deteriorated [because] of brain damage due to lack of oxygen after the suicide attempt,” Yunus said.

In this Thursday, July 9, 2020, file photo, police officers flank French national Francois Camille Abello, center, as he is presented to the media during a press conference at the regional police headquarters in Jakarta, Indonesia. (AP Photo, File)

Abello was arrested last month in a hotel room in the capital Jakarta after nearby residents tipped off police to a foreigner suspected of exploiting children, according to investigators.

Police said he was found in the hotel room with two naked underage girls, the BBC reported.

Videos found on Abello’s computer showed him engaging in illegal sex acts with 305 children aged 10 to 17, police said during a news conference Thursday. Abello appeared at the news conference in handcuffs but did not speak.

Jakarta Police Chief Nana Sudjana said most of Abello’s alleged victims were street children he lured by offering them work as models. Abello paid them between 250,000 and 1 million rupiah ($17 and $70) for engaging in sex acts and beat those who refused, Sudjana said.

Abello, the French man accused of molesting over 300 Indonesian children, has died after apparently trying to kill himself in detention, police said Monday. (AP Photo, File)

He had faced a maximum penalty of chemical castration or death by firing squad under Indonesia’s child protection laws if convicted, Yunus said.

Guards at the detention center were questioned and the cell examined as part of the death investigation, the BBC reported, citing police.