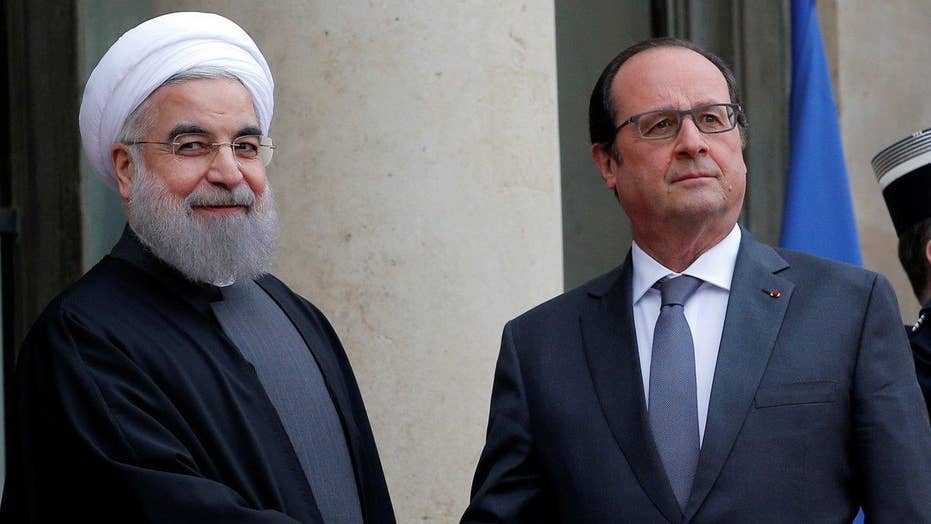 It was retail therapy that would make the most ardent shopaholic’s head spin, but Louis Vuitton, Gucci and Ferragamo weren't on the list.

Liberated from crippling international sanctions and flush with newly unfrozen assets, Iranian President Hassan Rouhani this week inked a flurry of lucrative deals with European companies during the first such tour for an Iranian leader since 1999.

In Italy, Rouhani signed some $18 billion worth of deals, including shipbuilding, steel and energy contracts. Next, Rouhani moved on to gay Paris for another staggering round of shopping:

“It will give them more money. They could use that money to fund various nefarious ends.”

- $400 million for a manufacturing deal with carmaker Peugeot.  Check.

- A deal with energy giant Total to buy up to 200,000 barrels of Iranian crude per day. Double check.

The dizzying dealmaking was made possible by the lifting of international sanctions on Iran following an agreement with the West to dismantle much of its suspect nuclear infrastructure.

The flurry of contracts overshadowed a few culture clashes along the way, including the “coverup” in Rome of statues deemed too immodest for the Iranian guests. One Italian complained of “cultural submission,” and in France, a lunch meeting was scuttled when the local party refused to give up their beloved wine at the table.

While Iran was spreading around much of its newfound wealth, fears remain that some of the money will be spent further destabilizing the Mideast region. Iran has forces or proxies at work in Syria, Yemen and Iraq, and Sunni nations believe Tehran's burgeoning pockets make it an even bigger threat.

“It will give them more money," said Emma Ashford, of the Cato Institute. “They could use that money to fund various nefarious ends.”

Ashford, a supporter of the controversial nuclear deal, and others hope Iran will instead pour the money into the country’s beleaguered economy. She also sees the agreement as an opening for a larger thaw in relations between Washtington and Tehran.

“We have to move past problems [with the U.S.] step by step,“ Rouhani said in Paris. “Both sides realize that a better future could benefit both countries.”

But while Rouhani's delegation huddled and shook hands with its new economic partners inside restaurants and offices, protesters were outside, calling attention to Iran's troubling human rights record.

A member of Femen, a French-based, largely female protest group known for topless demonstrations against sex trafficking and homophobia, dangled from a Paris bridge in a mock hanging to dramatize human rights abuses. The French-based anti-regime  National Council of Resistance of Iran was out in force, too.

How long Iran and its nascent economic clout will be welcome at European power lunches remains to be seen. Despite signing the deal promising transparency and to forgo efforts to pursue nuclear weapons, Iran has in recent weeks sent mixed signals to the west.

Earlier this month, Iran briefly detained 10 U.S. Navy sailors, even publicizing humiliating footage of the Americans being forced to kneel and apologize for straying into Iranian-claimed waters in the Straits of Hormuz. That followed an incident in December in which an Iranian gunship fired rockets within 1,500 yards of a U.S. ship.

On Friday, it was reported that Iran flew an unarmed drone over a U.S. aircraft carrier. Finally, the U.S. this month announced new sanctions against Iran stemming from Iran's October testing of a precision-guided ballistic missile capable of delivering a nuclear warhead, in defiance of a UN ban.