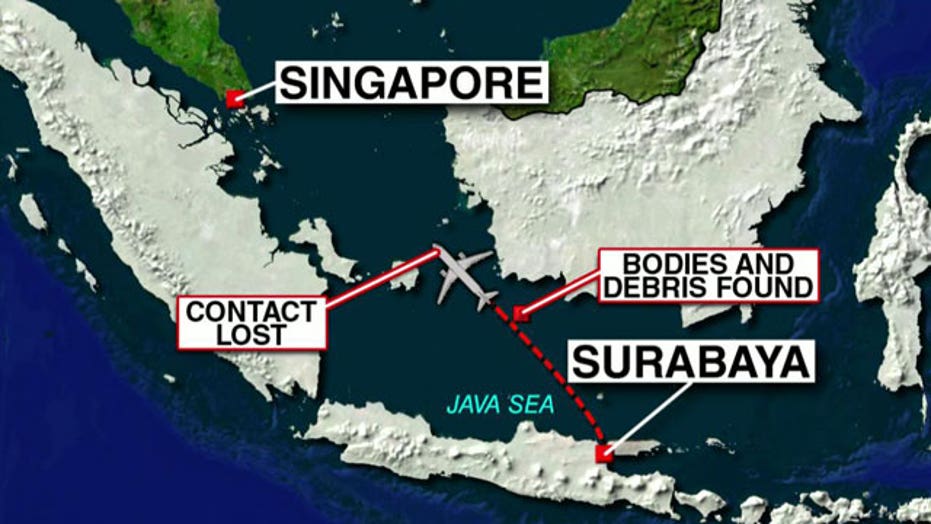 SURABAYA, Indonesia – A passenger aboard AirAsia Flight 8501 became the first victim of the crash to be returned to her family Thursday, one of many painful reunions to come, as search crews struggled against wind and heavy rain to find more than 150 people still missing.

Her body, in a dark polished casket topped with flowers, was handed over to her family at a brief ceremony at a police hospital in Surabaya, the Indonesian city where the plane had taken off. A family member cried as she put both hands on the coffin.

After a Muslim cleric said a prayer for the deceased, the casket was immediately taken to a village and lowered into a muddy grave, following Muslim obligations requiring bodies to be buried quickly. An imam said a simple prayer as about 150 people gathered in the drizzling rain, and red flowers were sprinkled over the mound of wet dirt with a small white tombstone.

Flight 8501 crashed into the Java Sea on Sunday with 162 people aboard. Eight bodies have been recovered, including one brought Thursday to Pangkalan Bun, the nearest town to where the wreckage was spotted Tuesday.

In the thick of Indonesia's rainy season, the weather has frequently prevented helicopters and divers from operating while strong sea currents have kept debris moving.

Singapore's navy sent in an unmanned underwater vehicle capable of surveying the seabed to try to help pinpoint the wreckage and the all-important "black boxes" -- the flight data recorder and cockpit voice recorder. Indonesian equipment in the search includes a minesweeper, a private survey ship that specializes in sea mapping and a vessel that can conduct 3-D imaging and detect pings from the black boxes. Aircraft capable of detecting metal also were deployed.

We are "focusing on finding the body of the plane," Indonesia air force spokesman Rear Marshal Hadi Tjahjanto told reporters. "There was something like a dark shadow once seen from a plane, but it cannot yet be proven as wreckage."

The seven bodies were recovered from an area off Borneo island, about 160 kilometers (100 miles) from the site where bodies were first spotted. Remains are being sent initially to Pangkalan Bun, the closest town, before being transported to Surabaya, Indonesia's second-largest city, where Flight 8501 had taken off.

Choppy conditions had prevented divers from entering the water Wednesday, and helicopters were largely grounded, but 18 ships continued to survey the narrowed search area.

Sonar images have identified what appeared to be large parts of the plane.

"It's possible the bodies are in the fuselage," said Vice Air Marshal Sunarbowo Sandi, search and rescue coordinator in Pangkalan Bun. "So it's a race now against time and weather."

The longer the search takes, the more bodies will decompose and the more debris will scatter.

Aviation expert Geoffrey Thomas in Australia said there's a good chance the plane hit the water largely intact, and that many passengers remain inside it.

He said the bodies recovered so far "would have come out with a breach in the fuselage," he said. "But most passengers still should have had their seat belts on, particularly as the plane was going into weather. The captain would have still had the seat belt sign on."

It is unclear what brought the plane down about halfway into its two-hour flight from Surabaya to Singapore. The jet's last communication indicated the pilots were worried about bad weather. They sought permission to climb above threatening clouds but were denied because of heavy air traffic. Four minutes later, the airliner disappeared from the radar without issuing a distress signal.

The black boxes hold data that will help investigators determine the cause of the crash but have yet to be recovered.

Items recovered so far include a life jacket, an emergency exit door, an inflatable slide, children's shoes, a blue suitcase and backpacks filled with food.

Officials have not announced the identities of the recovered bodies. Relatives have given blood for DNA tests and submitted photos of their loved ones, along with identifying information such as tattoos or birthmarks that could help make the process easier.

The long wait, with its starts and stops, has been frustrating for Sugiarti, 35. Her 40-year-old sister, Susiyah, was a nanny traveling to Singapore for a vacation with her employers and their 2-year-old daughter.

"I hope that they can find her body soon. I feel sorry for my sister because it has already been five days," she told reporters at a crisis center set up at a Surabaya police station. "I am trying very hard to be patient."

Nearly all the passengers were Indonesian, and many were Christians of Chinese descent. The country is predominantly Muslim, but sizeable pockets of people of other faiths are found throughout the sprawling archipelago.