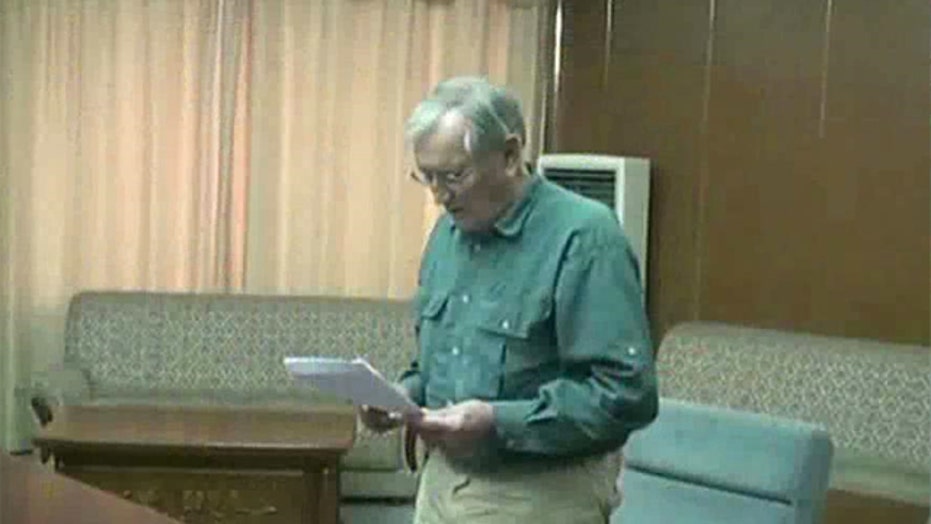 New video of captured US veteran in North Korea

The family of an 85-year-old Korean War veteran detained for more than a month by North Korea has hung yellow ribbons as they hope for his safe return.

In a statement released over the weekend, the family of Merrill Newman said the State Department had informed them that the Swedish ambassador to North Korea visited Newman at a Pyongyang hotel Saturday and reported he’s in good health. Sweden handles consular issues for Americans in North Korea as the U.S. and North Korea have no diplomatic relations.

"We were very pleased to hear that the ambassador was allowed to pay this first visit to Merrill," the statement said. "As a result of the visit, we know that Merrill is in good health. ... Merrill reports that he is being well treated and that the food is good."

Newman's family said the ambassador's visit eased their concerns about his well-being, and pleaded with North Korean authorities to take his health and age into account and let him go as an act of humanitarian compassion. Newman suffers from a heart rhythm disorder

The family's statement came hours after North Korea claimed that Newman had apologized for "hostile acts" against that country during a recent trip and alleged crimes against North Korea during the Korean War.

The family did not comment on the apology, but a yellow ribbon was attached to the front door of the Pasadena, Calif., home of Jeff Newman, the veteran’s son.

North Korean authorities released video showing Newman wearing glasses, a blue button-down shirt and tan trousers, reading his alleged apology, which was dated Nov. 9 and couldn't be independently confirmed. Pyongyang has been accused of previously coercing statements from detainees, and the four-page statement Newman read was riddled with stilted English and grammatical errors, such as "I want not punish me."

"I have been guilty of a long list of indelible crimes against DPRK government and Korean people," Newman purportedly wrote, adding: "Please forgive me."

The statement, carried in the North's official Korean Central News Agency, said the war veteran allegedly attempted to meet with any surviving soldiers he had trained during the Korean War to fight North Korea, and that he admitted to killing civilians and brought an e-book criticizing North Korea.

Newman "masterminded espionage and subversive activities against the DPRK and in this course he was involved in killings of service personnel of the Korean People's Army and innocent civilians," North Korea's official KCNA news agency said, according to Reuters.

"He admitted all his crimes and made an apology for them," the news agency was quoted as saying.

During the war, Merrill Newman trained a group of partisan fighters known as the 'Kuwol Regiment,' or 'Kuwolsan' in Korean, according to a former member of that regiment, Reuters reported.

It was one of several groups of anti-communist partisans under the command of the U.S. Army 8240th Unit -- dubbed the 'White Tigers' -- which coordinated some of the most daring missions of the Korean War. The White Tigers reportedly embedded undercover agents deep in enemy territory and spied on and disrupted North Korean operations, according to documented histories of the regiment.

North Korea remains technically in a state of war with the South and with the U.S. because the war ended with a truce, not a peace treaty.

"We remain deeply concerned about the welfare of the U.S. citizens held in custody in the DPRK,” said National Security Council spokeswoman Caitlin Hayden, referring to Newman and missionary Kenneth Bae, the latter of whom has been in North Korean custody for more than a year.

“We continue to urge the DPRK authorities to grant him amnesty and immediate release” Hayden continued, using the acronym for the Democratic People's Republic of Korea, North Korea's official name. “We also urge the immediate release of Merrill Newman … given Mr. Newman's advanced age and health conditions.”

It’s unclear whether Vice President Joe Biden will ask for Chinese help in pressuring North Korea to release Newman, during his visit to Asia this week.

The North Korean statement alleges that Newman says if he goes back to the U.S. he will “tell the truth about the country” -- a possible indication that Newman could be released.

The apology can be seen as Pyongyang taking steps needed to release Newman, said Yoo Ho-Yeol, a professor of North Korea studies at Korea University in Seoul. North Korea likely issued the confession in the form of an apology to resolve Newman's case quickly without starting legal proceedings, Yoo said.

North Korea is extremely sensitive about any criticism and regularly accuses Washington and Seoul of seeking to overthrow its authoritarian system through various means -- claims the U.S. and South Korea dismiss. The State Department has repeatedly warned Americans about traveling to the country, citing the risk of arbitrary detention.

Newman is an avid traveler and retired finance executive, living in a retirement community in Palo Alto, Calif. He was taken off a plane Oct. 26 by North Korean authorities while preparing to leave the country after a 10-day tour. His traveling companion seated next to him, neighbor and former Stanford University professor Bob Hamrdla, was allowed to depart.

Jeffrey Newman said his father wanted to return to the country where he spent three years during the Korean War.

Lee Newman, the veteran's wife, said in a statement released last week that the family feels a misunderstanding led to his detention.

North Korea has detained at least six Americans since 2009, including two journalists accused of trespassing and several Americans, some of whom are of Korean ancestry, accused of spreading Christianity. Bae, a Korean-American missionary and tour operator, has been detained for more than a year. North Korea sees missionary work as a Western threat to its authoritarian government.

In a statement Saturday, Bae's family said it was thankful for the U.S. calling for the release of both men. "Now we're including Mr. Newman in our prayers," the family said.