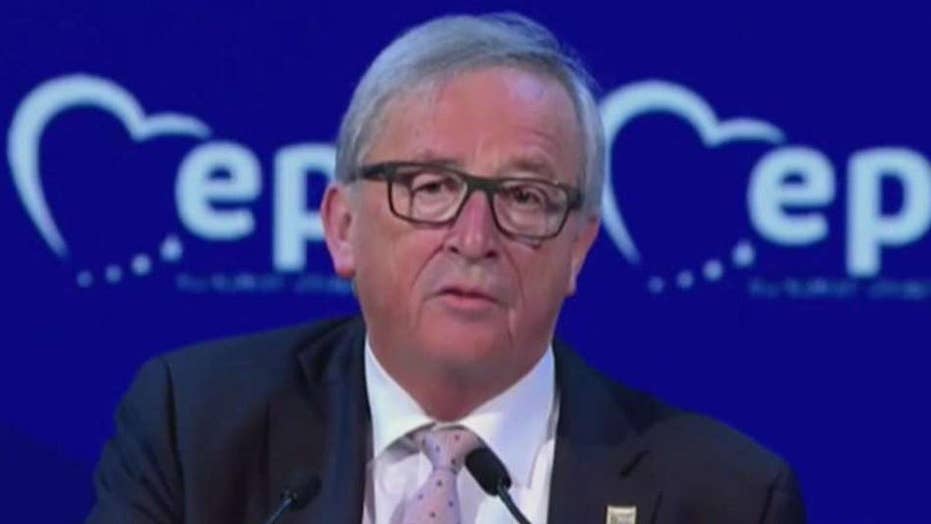 EU chief threatens to campaign for US breakup after Brexit

Trump's support of move angers leader, says he will campaign for independence of Ohio, Texas

The head of the European Union’s executive arm warned President Donald Trump to mind his own business when it comes to Brexit.

“The newly elected U.S. president was happy that the Brexit was taking place and has asked other countries to do the same,” European Commission President Jean-Claude Juncker said Thursday. He warned: “If he goes on like that, I am going to promote the independence of Ohio and Austin, Texas.”

FARAGE ON BREXIT: THE WORLD IS NOW OUR OYSTER

Juncker, a Luxembourg politician who has been president of the European Commission since 2014, advised that every leader should focus on his or her own job and urged the EU’s remaining 27 nations to unite.

He was speaking at a conference of his EPP Christian Democrat group in Malta, AFP reported.

“Brexit is not the end of everything, but we must make it a beginning of something that will be new, stronger and better,” Juncker said.

On Wednesday, British Prime Minister Theresa May started the formal process that would overturn four decades of integration between Britain and its neighbors.

"Today the government acts on the democratic will of the British people," May told lawmakers in the House of Commons on Wednesday morning. “This is a historic moment from which there can be no turning back. The United Kingdom is leaving the European Union.”

The Asspcoated Press contributed to this report.