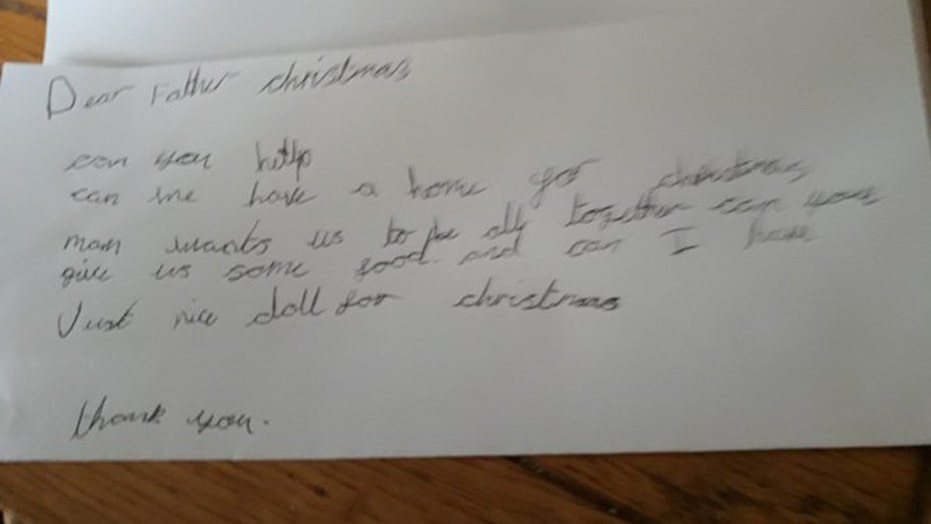 A 7-year-old girl from England sent a heartbreaking handwritten letter to Santa asking for a home and food for her family this Christmas.

The child, whose name has not been made public, dropped the letter in a special Santa mailbox inside the L6 Community Center in Liverpool. The Santa box was left out for children who visit the center to write their Christmas wishes.

The letter starts off, "Dear Father Christmas, Can you help? Can we have a home for Christmas? Mam wants us to be all together. Can you give us some food and can I have just a nice doll for Christmas?"

The sweet but sad wish prompted Labour councilor Gerald Woodhouse to tweet a picture of the girl's note.

He wrote: "Last week @L6Centre we started getting down Xmas decorations we placed The Santa post box in the cafe until grotto is set up. Today, I went into @L6Centre to sort food parcels for residents while passing post box I looked in it!! Just read a 7 yrs old letter Vote Labour."

"It was so upsetting to read," Woodhouse told Sky News. "I know the children, and it's not right that a 7-year-old child is worrying about Christmas in November. There is no one around to support these children."

According to the report, the children current live with a relative. Woodhouse said the community center is trying to help the family and get them in a hotel for Christmas Day.

His tweet garnered several sympathetic responses to the little girl's letter, with some offering to donate their time and money to the non-profit.

Amanda Nicolson, @amanda_nicolson, tweeted, "The sweet innocence of a child believing that santa can help. Heartbreaking. Why did we let it get this far?"

Emma J (@Emmaroodle) also weighed in: "This has broken my heart. I'm donating my time and stock to paint the kids faces at the L6 Christmas party... Can't bear this."

@teaceeme tweeted: "A child asking Santa for a home and some food. 21st Century UK, rolling back the centuries."

According to Sky News, poverty in Liverpool is higher than the U.K. average, with 29 percent of children in the city living below the breadline once housing costs are taken into consideration.