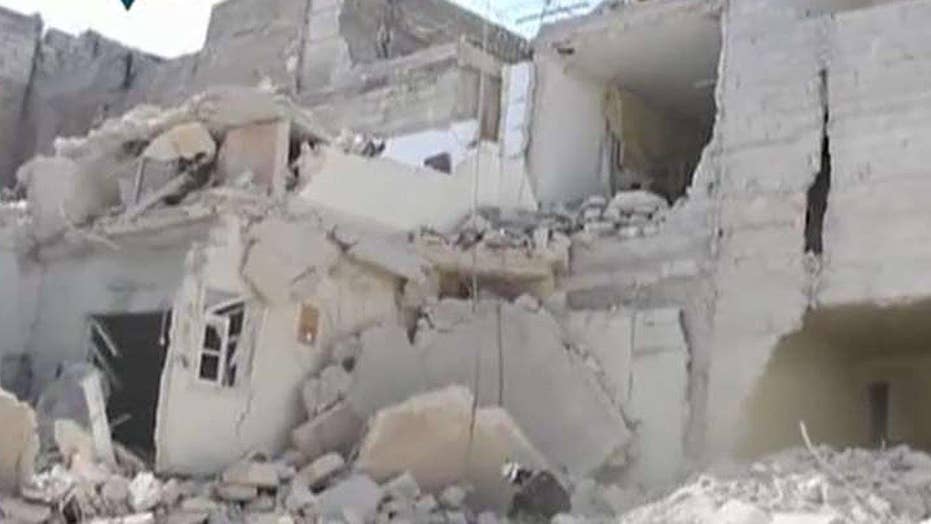 Report: Over 65 killed in 3-day wave of Aleppo airstrikes

After months of review, the U.S.-led coalition confirmed Thursday that July airstrikes in northern Syria near Manbij killed 24 civilians who were mixed in with Islamic State militants. The total is far fewer than the more than 50 dead initially reported by Syrian opposition activists.

Results of the strikes were released as part of a larger report that concluded a total of 54 innocent civilians were killed in seven airstrikes since March.

The 24 civilians were killed in two villages near Manbij, and their deaths came amid intense fighting, including a wide ground offensive, to retake the northern city from militants. The Britain-based Syrian Observatory for Human Rights said at the time that at least 56 civilians were killed, but estimates varied wildly, and other groups put the number as high as 200.

The coalition said in its release Thursday that the civilians were "interspersed with combatants" in a known IS staging area where no civilians had been seen in the 24 hours prior to the attack.

EUROPE POLICE REVEAL WHICH NATIONS ISIS COULD TARGET NEXT

"Reports indicated that approximately 100 (Islamic State) fighters were preparing for a large counterattack against partnered Syrian Arab Coalition/Syrian Democratic Forces and, unknown to coalition planners, civilians were moving around within the military staging area, even as other civilians in the nearby village had departed over the previous days," the report said. It said the strikes killed about 100 militants and destroyed fighting positions, vehicles and a mortar system.

The Thursday report included the results of 19 investigations into strikes where innocent civilians may have been killed, and found that in 12 of the cases, the allegations were not credible.

In most of those cases, the investigations determined that there had been no coalition airstrikes in the specific geographic area on that day. The Syrian government and Russia also conduct airstrikes in Syria. The Iraqi government conducts strikes in Iraq.

Of the seven incidents that resulted in civilian casualties, six were in Syria and one was in Iraq.

The report found that:

--Three civilians were killed near Sala Heya, Syria, on March 31.

--Two civilians were killed near Shaddadi, Syria, on May 16.

--Fifteen civilians were killed near Arghanndorh, Syria, on July 28.

--One civilian was killed near Taltanah, Syria, on October 4.

--One civilian was killed in Idlib, Syria, on October 17.

--Eight civilians were killed near Fasitiyah, Iraq, on October 22.

Three other allegations of civilian casualties in strikes in October were still being assessed. Overall, since the start of military operations against the Islamic State group in Iraq and Syria, the coalition said 173 innocent civilians have been inadvertently killed in strikes. The strikes can include munitions dropped from manned or unmanned aircraft or conducted by ground artillery.