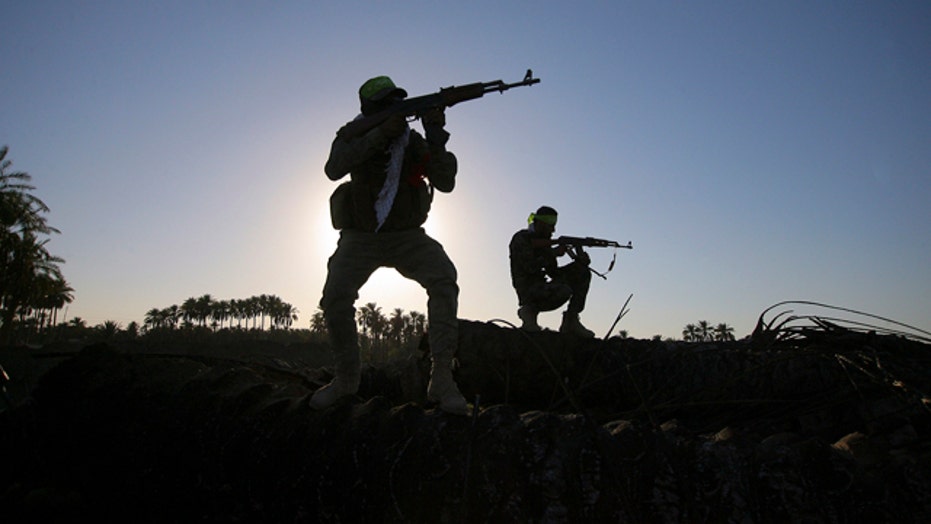 Inside ISIS' threat to Baghdad

ISIS has shoulder-fired missiles and has shot down Iraqi helicopters. Why Baghdad is in potential peril

Despite airstrikes from the U.S.-led coalition, Islamic State militants are in a position to wreak havoc on Baghdad after making gains in nearby territories, adding to the sense of siege in the Iraqi capital.

Yet some military experts believe that the terror group, who now control a large territory along the border of Iraq and Syria, won’t be able to defeat the forces now massed around the capital.

However their new position does give them the ability to wreak terror in Iraq's biggest city, with its suicide attacks and other assaults further eroding confidence in Iraq's nascent federal government and its troops, whose soldiers already fled the Islamic State group's initial lightning advance in June.

"It's not plausible at this point to envision ISIL taking control of Baghdad, but they can make Baghdad so miserable that it would threaten the legitimacy of the central government," Richard Brennan, an Iraq expert with RAND Corporation and former Department of Defense policymake told The Associated Press.

The siege fears in Baghdad stem from recent gains made by the Islamic State group in the so-called Baghdad Belt -- the final stretch between Anbar province, where the group gained ground in January, and Baghdad. The group has had a presence in the Baghdad Belt since spring, Iraqi officials say, but recent advances have sparked new worries.

The Islamic militants have reportedly infiltrated the Baghdad suburb of Abu Ghraib, not far from the runway perimeter of Baghdad's international airport.

Islamic State’s proximity to the airport is especially worrisome, because they are now armed with shoulder fired anti-aircraft missiles with a 20-mile range, according to the Iraqi Defense Ministry. The weapons, which Islamic State has grabbed up along with tanks, helicopters and fighter planes as it has seized up vast territory in northern Syria and Iraq, could allow the militants to shut down the airport.

"It's scary," said Maha Ismail, who recently visited one of Baghdad's new shopping malls. "But we have seen a lot worse than this so we are gathering despite all the warnings."

Islamic State group says it has a foothold inside Baghdad, having claimed responsibility for a number of attacks in the city, particularly in the Sadr City neighborhood -- a Shiite stronghold. In August, the group claimed responsibility for an attack on a Shiite mosque in New Baghdad, and another in the Shiite-majority district of Utaifiya in Baghdad, which together killed 26 people.

Some attacks go unclaimed, raising fears that other groups may look to capitalize on the tensions provoked by the Islamic State group. On Saturday, a series of unclaimed car bomb attacks in Iraq's capital killed 38 people in Shiite areas, authorities said.

Also in Shula, police said a suicide car bomb attack on a security checkpoint killed 18 people and wounded dozens others.

Yet analysts, like Brennan from the RAND Corporation, say capturing Baghdad remains beyond the Islamic State group's ability. At its worst, the group might "start pressing into the western areas of Baghdad, going into the Sunni areas of Baghdad and pressing up against the Tigris (River) -- if not controlling it, then at least testing the control of the central government," he said.

Air Force Col. Patrick Ryder, a U.S. Central Command spokesman, said Saturday that the Iraqi military "continues to maintain firm control of the city and there is no imminent threat of an effective" offensive by the Islamic State group.

"While there are pockets of ISIL in the vicinity of Baghdad, (Iraqi security forces) continue to conduct operations to engage these elements and push back with the support of U.S. airstrikes when necessary," Ryder said.

Beyond the U.S.-coordinated airstrikes and the massing of Iraqi troops, the country's religious and ethnic lines likely will staunch any advance by the Sunni militants of the Islamic State group. From Baghdad further south, Iraq's population is overwhelmingly Shiite and the lands there are home to some of its most important shrines.

Already, Shiite militias back up government forces in Baghdad and elsewhere in Iraq -- their flags and symbols provocatively displayed across the capital. Such militias, like Iran-supported Asaib Ahl al-Haq and Muqtada al-Sadr's Mahdi Army, "are battle tested," said David L. Phillips, the director of the Peace-building and Rights Program at Columbia University. Challenging them likely would become a bloody slog for the Islamic State group, he said.

"The militias are not bound by rules of war," he added. "They and (the Islamic State group) share one thing in common: Neither is bound by the Geneva Conventions."