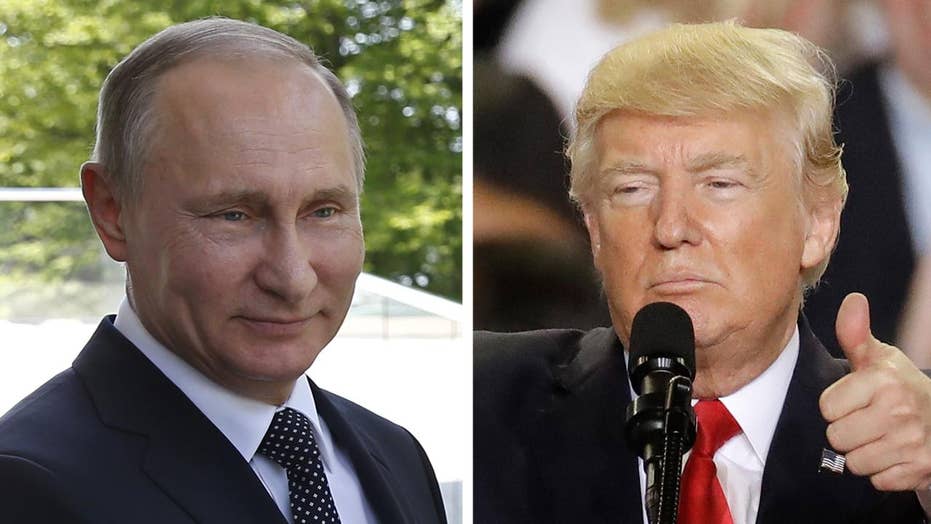 Trump and Putin agree to work together on North Korea, Syria

A deadly blast rocked a rebel-held Syrian town near the Turkish border on Wednesday as Russian-led cease-fire talks between the Syrian government and rebel groups resumed in Kazakhstan.

At least five people were killed in the explosion.

The fourth round of talks was held in Astana, the capital of Kazakhstan. The opposition pulled out of the talks shortly after they kicked off, demanding officials to commit to an earlier cease-fire reached in December that included provisions for the release of detainees.

President Donald Trump sent a senior State Department official to the talks for the first time. Trump and Russian President Vladimir Putin signaled greater cooperation on Syria in a phone call on Tuesday, a change since the U.S. ordered airstrikes on a Syrian airbase in April.

The White House, which described the call as "a very good one," said the two leaders discussed setting up safe zones in Syria, where a civil war has been raging for more than six years.

The topic of setting up the zones was the top issue in the cease-fire talks. The opposition circulated a proposal calling for the creation of "de-escalation" zones, to be monitored by observer countries. The zones, according to the document, would allow for the voluntary return of refugees.

Staffan de Mistura, the United Nations envoy in Syria, called on the armed opposition's delegation to rejoin the talks on Thursday, urging them not to ruin the "possibility of de-escalation."

Putin and Turkish leader Recep Tayyip Erdogan also said they supported the proposal of creating the safe zones during a joint news conference. The leaders met privately at the Russian presidential complex in the resort city of Sochi.

Erdogan said he hopes "this zone of de-escalation will be accepted" during the cease-fire talks.

The Interfax news agency quoted a Kazakh diplomat, Aidarbek Tumatov, as saying that a Russian proposal involves the creation of at least four zones in Syria. Russia has not officially released its proposal, but reports in Russian state media said the zones would be patrolled by forces from Russia, Iran and Turkey.

The Tass news agency reported that Stuart Jones, an assistant U.S. secretary of state, has already met separately with Russia's representative. Syrian TV said the Astana talks began with a meeting between delegations from Russia and Iran, another close ally of Assad.

Syrian activists say a large explosion in a northern town along the border with Turkey has killed and wounded several people. (Azaz Media Office via AP)

As the cease-fire talks began, a car bomb went off in the town of Azaz, close to the offices of the Syrian interim government that represents the opposition in rebel-held area, Britain-based Syrian Observatory for Human Rights reported.

Azaz is on a key opposition supply route, and is a hub for fighters and opposition activists. It also hosts people displaced from fighting elsewhere in the country. The town has been the scene of several attacks, some claimed by the Islamic State group. A huge explosion in January killed at least 50 people in Azaz.

A video of the aftermath of Wednesday's explosion posted online by the Azaz Media Center showed burnt-out cars and firefighters struggling to put out a blaze. Gunfire rang out as people gathered at the scene and ambulances arrived.

The Turkish Dogan news agency said some of the wounded were taken to the state hospital in the Turkish border town of Kilis for treatment.