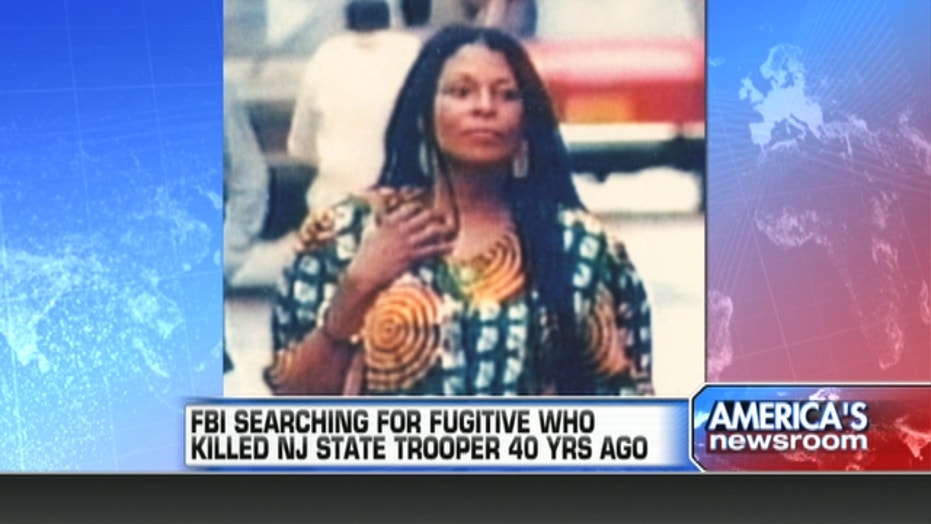 Today marks the 40th anniversary of the fatal shootout on the NJ Turnpike that resulted in the death of NJ State Trooper Werner Foerster. Joanne Chesimard escaped prison and has been living in Cuba since the 1980's.

The reward for the capture and return of the godmother of slain rapper Tupac Shakur was doubled to $2 million Thursday.

Joanne Chesimard, now living in Cuba as Assata Shakur, is convicted of murdering a New Jersey state trooper in a bloody gun battle 40 years ago.

On Thursday the FBI also announced it had made Chesimard the first woman on its list of most wanted terrorists.

"She continues to flaunt her freedom in the face of this horrific crime," State Police Superintendent Col. Rick Fuentes said at a news conference Thursday. Fuentes called the case "an open wound" for troopers in New Jersey and around the country.

The Justice Dept. has maintained a $1 million reward for information leading to her capture. The additional money is being put up by the state of New Jersey through civil and criminal forfeiture funds and won't fall on taxpayers, state Attorney General Jeffrey Chiesa said Thursday.

Chesimard, a member of the violent Black Liberation Army, was convicted of the 1973 murder of state trooper Werner Foerster during a traffic stop. The BLA was responsible for killing more than a dozen police officers in the 1970s and 80s, said Aaron Ford, special agent in charge of the FBI's Newark division.

According to Fuentes, Foerster and his partner stopped a car carrying Chesimard and two cohorts on the New Jersey Turnpike for a broken tail light. When the troopers approached the car, a gunfight ensued and both troopers were injured. Chesimard then allegedly took Foerster's gun and shot him twice in the head as he lay on the ground.

She was convicted in 1977 but escaped from prison in New Jersey in November 1979 with the help of accomplices. She spent the next few years living in safe houses, two of which were in New Jersey and Pennsylvania, before surfacing in Cuba in 1984, Fuentes said.

In Cuba, Chesimard has continued to espouse her anti-U.S. views in speeches advocating "revolution and terrorism" and may have connections to other international terrorist organizations, Ford said.

"She is a domestic terrorist who murdered a law enforcement officer execution style," he said. "And while we can't right the wrongs of the past, we can and will continue to pursue justice no matter how long it takes."

Chesimard is believed to be one of dozens of American fugitives living in Cuba, many of them one-time members of U.S. militant groups. Cuba doesn't haven an extradition agreement with the U.S. due to the chilly relations between the two countries over the last five decades, but the climate appears to be slowly changing.

In recent years, Cuba has deported some fugitives back to the U.S., including one man convicted of mail fraud and another sought on child pornography charges. This month, the country returned a Florida couple accused in a custody dispute of kidnapping their two children and sailing to Cuba.

Authorities said Thursday they hope the increased attention and reward will convince someone to come forward.

"Our resolve to capture Joanne Chesimard does not diminish with the passage of time," Chiesa said. "Instead, it grows stronger with the knowledge that this killer continues to be free. Our hope is the augmented reward will spur action that will bring Joanne Chesimard back to face the justice she has evaded for far too long."