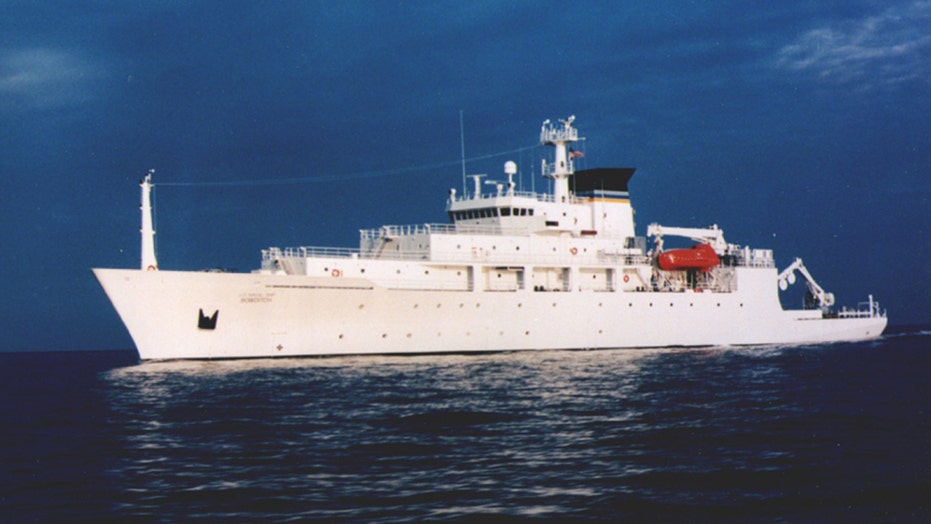 A Chinese Navy ship stole an American underwater research drone while a U.S. crew was watching, in a South China Sea area contested by the Chinese and the Philippines, U.S. defense officials told Fox News on Friday.

The incident occurred around noon Thursday local time approximately 40 miles west of the Philippines and about 150 miles from Scarborough Shoal. For days, the Chinese ship had been shadowing the American ship USNS Bowditch, which deployed the drone, a Slocum Glider.

"This is an act of war against the United States," Gordon Chang, analyst and author of "The Coming Collapse of China," told Fox News' "Happening Now." He said the move was an act of war because U.S. military property was stolen.

The research ship is owned by the U.S. Navy but operated by Military Sealift Command, with a crew of contracted civilian mariners and scientists.

The American crew watched the Chinese take the underwater drone from a short distance away. The Chinese Navy ship was only a quarter of a mile away, a defense official told Fox News.

The Chinese have been regularly shadowing U.S. Navy vessels in the South China Sea for months, Fox News was told. The Center for Strategic and International Studies, a Washington think tank, reported Wednesday that China apparently set up anti-aircraft guns and close-in weapons systems designed to guard against missile attacks on all seven of its man-made islands in the strategically vital area.

"We call upon China to return our [unmanned underwater vehicle] immediately, and to comply with all of its obligations under international law," Pentagon Press Secretary Peter Cook responded.

Fox News was told the underwater drone was used to map the sea floor and gather other oceanographic data, and contained no classified material. The USNS Bowditch contained only small arms which were likely stored away on board, a defense official said.

The ship is used to "support worldwide oceanography programs, including performing acoustical, biological, physical and geophysical surveys," according to its website.

After the Chinese vessel plucked the drone out of the water, the American research ship's crew tried to call the Chinese ship over bridge-to-bridge radio, but to no avail.

The State Department lodged a formal protest known as a demarche, which the U.S. ambassador in Beijing delivered to the Chinese government Friday, Fox News was told.

The department did not immediately respond when Fox News reached out for comment.

Officials at the Chinese Embassy said they had no immediate comment. But the incident is likely to fray the already tense relations between U.S. and China. Beijing was angered by President-elect Donald Trump's decision to talk by phone with Taiwanese President Tsai Ing-wen on Dec. 2, and by his later comments that he did not feel "bound by a one-China policy" regarding the status of Taiwan, unless the U.S. could gain trade or other benefits from China.

China's Communist party-owned newspaper Global Times wrote earlier this week that Beijing should be ready to seize Taiwan by force before the incoming Trump administration "activates the Taiwan card."