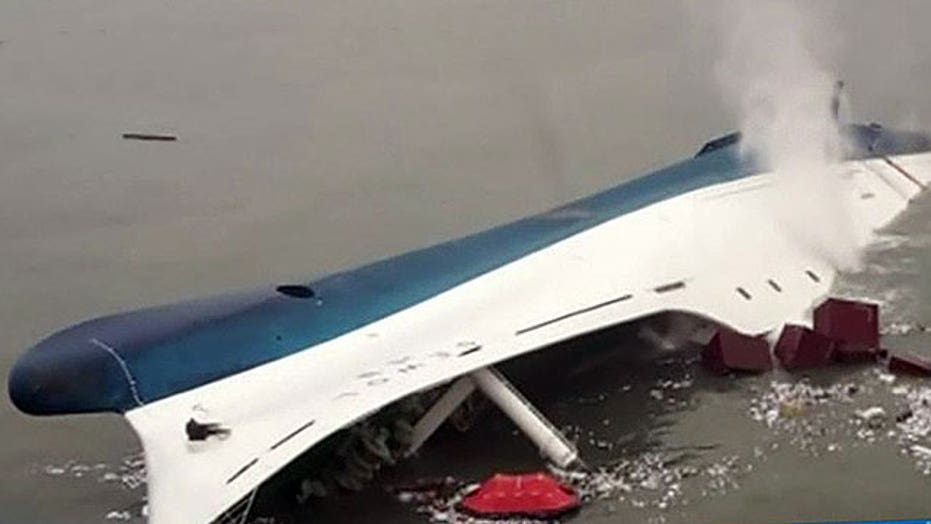 Divers swam through the water Wednesday searching for the bodies of children in cabins and corridors of the sunken South Korean ferry.

According to Reuters, the divers can only see a few inches in front of them in the wreckage of the ship.

Most of the bodies found had broken fingers, presumably from children frantically trying to climb walls or floors to escape, local media reported, according to Reuters.

"We are trained for hostile environments, but it's hard to be brave when we meet bodies in dark water," diver Hwang Dae-sik told Reuters.

A maritime professor, who spoke with the third mate who was steering the ferry before it sank, said Wednesday that he suspects there was a problem with the steering gear.

Prof. Kim Woo-Sook of Mokpo National Maritime University is a former teacher of the third mate, Park Han-gyeol. She was arrested Saturday in connection with the accident, which left 302 people dead or missing.

Kim talked to Park at a Mokpo detention facility. He said she told him she ordered a helmsman to make a 5-degree turn that was part of the ship's normal course, but the steering gear turned too far and the helmsman could not turn it back. Tracking data show that the ship made a 45-degree turn, and that it turned about 180 degrees over about three minutes just before it began to sink April 16.

Prosecutors have said they are trying to determine the disaster's cause by examining the turn and other factors, including wind, currents, freight and modifications made to the ship.

Kim said he suspects a problem in the steering gear was behind the ship's sinking, together with freight that was reportedly secured too loosely. He cited reports that the ship's turn led some freight to shift to one side, making the vessel unbalanced.

He said that if the freight had been loaded on the ship tightly enough, the vessel would not have capsized even if the steering gear didn't work.

Senior prosecutor Ahn Sang-don said Monday the third mate has told investigators why she made the turn, but he would not reveal her answer, and said more investigation is needed to determine whether the answer is accurate.

On Wednesday, senior prosecutor Yang Jung-jin said government investigators have not confirmed problems in the steering gear of the Sewol, which remains submerged.

Kim said he told Park he believes she didn't make any mistakes in steering the ship, but was wrong to have followed the captain in escaping the ferry without protecting passengers. Eleven crew members, including Capt. Lee Joon-seok, and Park, have been arrested or detained and are suspected of negligence and abandoning people.

Kim said Park, 25, is from the southern city of Suncheon and graduated from the university's maritime transportation system division about two years ago. She worked as a mate for a ferry linking China and Incheon, South Korea, under a different company before moving to Sewol owner Chonghaejin Marine Co. Ltd. about four months ago, he said.

He described Park as "soft-hearted" and "diligent" and said she was among his favorite students. She often visited his office to seek his advice, and gave him gifts including flowers and small teacups from Vietnam, he said.

Kim said he visited Park in detention to console her after hearing reports that she was in a state of panic. She was in better condition than he had feared, he said, but still cried after seeing him.