Cherif Chekatt, the gunman who killed multiple people Tuesday at a Christmas market in Strasbourg, France, is dead, a Paris prosecutor said Thursday.

A wide-scale manhunt for the suspect had been ongoing since the shooting. Three people were killed in the attack and several others injured, police said.

France Interior Minister Christophe Castaner shared details on Twitter of how the incident unfolded. Around 9 p.m., police officers spotted a suspicious individual on Rue du Lazaret who fit the description of the suspect from Tuesday night's shooting, Castaner wrote in translated tweets. After the officers addressed him, the suspect turned around and opened fire at the officers, following which they responded, he wrote.

The suspect was armed with a pistol and a knife, a local police official told The Associated Press.

The National Police of the North, in a translated tweet, thanked the public for information which helped "find the wanted individual."

Before opening fire on the Christmas market in Strasbourg on Tuesday, Chekatt, 29, yelled "Allahu Akbar," Paris' public prosecutor said. Chekatt escaped the scene in a taxi.

The SITE Intelligence Group, which monitors extremist activity online, says the Islamic State group's Amaq news agency claimed Chekatt as a "soldier" of the group, according to The Associated Press. 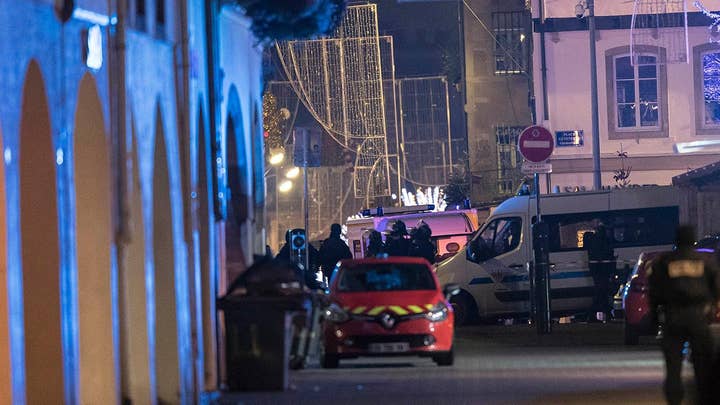 Nunez said Chekatt had been radicalized in prison and was being monitored by French intelligence services since at least 2015 due to his suspected religious extremism. Supporters of the Islamic State terror group were celebrating the shooting online, according to the U.S.-based SITE Intelligence Group, which monitors jihadi communications worldwide.

Chekatt was the subject of a “fiche S” – an indicator used by French law enforcement to signal potential national security threats, according to the BBC.

The country increased their security alert level hours after the attack occurred and dispersed additional security forces to Strasbourg, the interior minister said at the time.

Strasbourg, located about 310 miles east of Paris, is on the border with Germany.