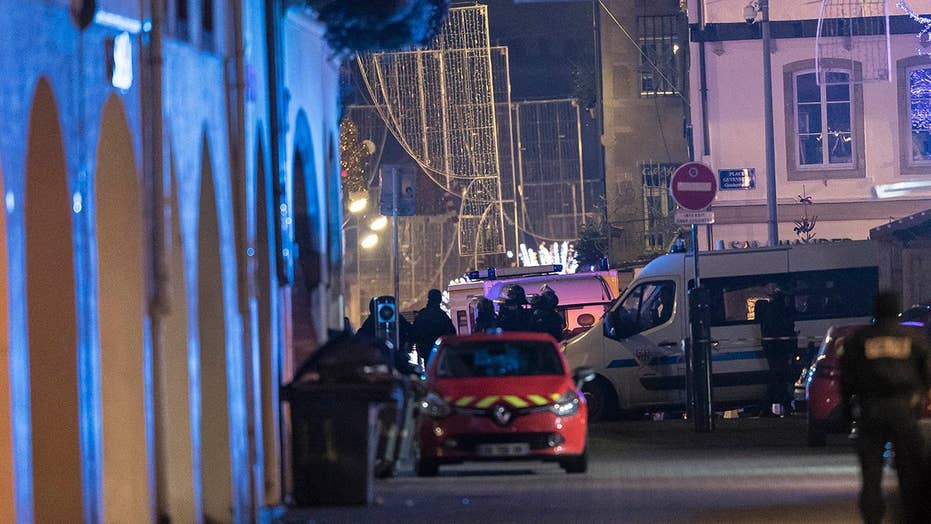 Five detained in manhunt for gunman in France attack

Though no groups have claimed responsibility for the attack, Islamic terrorists have a history of plotting assaults at Christmas markets — including one disrupted plot in which nearly a dozen militants sought to bomb the Strasbourg market around the millennium.

Chekatt escaped from the scene in a taxi, bizarrely bragging to the driver about being injured in a firefight with soldiers after killing 10 people, officials said. Police said three people were killed in the attack.

A wide-scale manhunt was underway near Strasbourg as the French government raised the security level and sent police reinforcements to the city, located about 305 miles east of Paris. But a top French official admitted Chekatt may no longer be in the city and could have slipped through the police dragnet into neighboring Germany, where he'd spent time in prison.

A photo of what appears to be Chekatt was released later Wednesday.

Nunez said Chekatt had been radicalized in prison and was being monitored by French intelligence services since at least 2015 due to his suspected religious extremism. Authorities did not say which religion; however, supporters of the Islamic State terror group were celebrating the shooting online, according to the U.S.-based SITE Intelligence group, which monitors jihadi communications worldwide.

Chekatt was the subject of a “fiche S” – an indicator used by French law enforcement to signal potential national security threats, according to BBC. It’s the same tag Amedy Coulibaly had received before he attacked a kosher supermarket in 2015.

Chekatt reportedly has a long rap sheet in France, including arrests for robbery. He also was convicted of robbery in Germany in 2016 and sentenced to two years and three months in prison after breaking into a dental practice and pharmacy.

He was also sentenced to prison in France in 2008 and in Basel, Switzerland in 2013 for other robberies, according to a 2016 verdict obtained by the Associated Press. Chekatt was reportedly deported back to France in 2016.

Witnesses described hearing screams around the Strasbourg market during the attack. Strasbourg – which is home to the European Parliament – bills itself as the “capital of Christmas”

“I heard two or three shots at around 7:55 p.m., then I heard screams. I got close to the window. I saw people running. After that I closed the shutters. Then I heard more shots, closer this time,” Youann Bazard, 27, told the Associated Press. “I thought maybe it's firecrackers. And then, as it got close, it was really shocking. There were a lot of screams...There were police or soldiers shouting 'Get inside!' and 'Put your hands on your head.'"

Tuesday's attack recalled the Dec. 19, 2016 ISIS-inspired truck-ramming at a Christmas market in Berlin. That attack killed 12 and injured 56 others.

Even before the Strasbourg shooting, police in France have recently been on high alert — though that security posture has had more to do with the increasingly violent anti-tax and anti-government protests sweeping the country in recent weeks than any terror fears.

Fox News' Cody Derespina and the Associated Press contributed to this report.