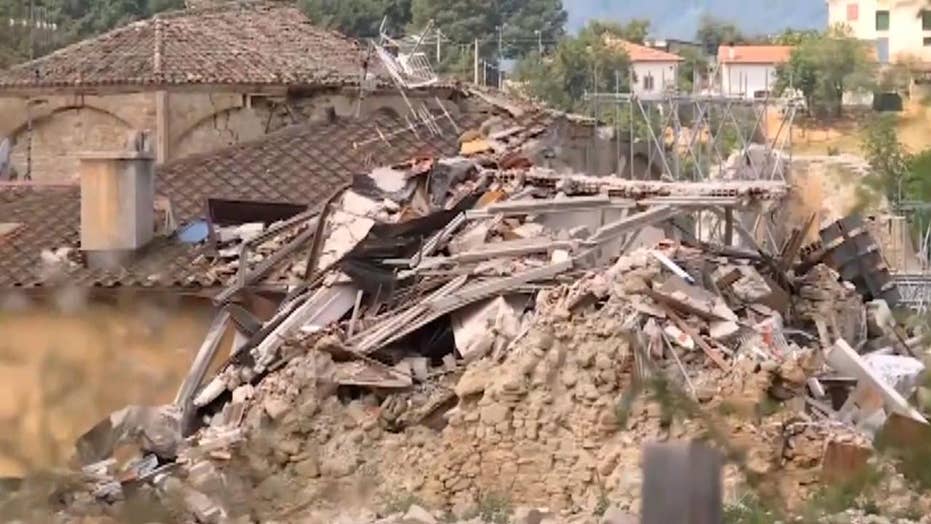 Rubble is still being cleared and reconstruction hasn't begun in Amitrice two years after a series of deadly earthquakes damaged parts of central Italy. Amy Kellogg reports from London.

It has been two years since a series of earthquakes badly damaged parts of central Italy, leaving parts uninhabitable, coming as a secondary punch in the wake of the deadly 6.2 quake that flattened Amatrice and some other communities in August of 2016.

Largely, reconstruction has not even begun. People blame bureaucracy in Italy for making the process particularly slow.

One man in a charcuterie shop in the Umbrian town of Norcia, which relies on tourism, said just before the election of Italy’s new government last spring, “I would like a real recognition of what our reality is and to de-bureaucratize as much as possible.”

Probably the worst hit town was Amatrice, which had the highest death toll: 237 people were killed there. The scenes of a lovely medieval town reduced to rubble were dramatic. Restaurants around the world pledged to donate money for each plate of the town’s famous dish, Pasta all’ Amatriciana, to relief efforts. But today, rubble is still being cleared and a blueprint for the new town has not been decided.

Mayor Filippo Palombini says, “People don’t feel abandoned.  They have still not gotten over what happened.”

Palombini says it is not a matter of money, yet. He claims he can’t even spend everything Amatrice has been given at this point because building has not begun. Like others, he is eager to get on with reconstruction and says one of his biggest challenges is ensuring people don’t lose hope the town will eventually be rebuilt.

The homeless are housed in temporary structures resembling mobile homes.  The mayor says they have the services they need and a new school will open in the fall.  The Amatrice area had 103 churches.  Half were totally destroyed, the other half, he says, can be rebuilt.  Much history was lost. Of course the new town cannot recreate the old, but in looking to a 21st century, earthquake-proof Amatrice, the Mayor is just hoping to somehow save the town’s identity.

Earthquake damage at the Ducal Palace, site of the rectorate, and in a classroom

The town of Camerino, high in the mountains of the Marche region, was not gutted the same way Amatrice was, but there was so much partial destruction that the center is uninhabitable.

University of Camerino Rector Paolo Pettinari is concerned about fully rebuilding his institution because he considers it a vital engine for the entire region. The University has 8,000 students, more than the number of full-time residents in Camerino.  The school sustained heavy damage, but Pettinari is proud to say it was back up and running in parts that were safe ten days after the October, 2016 earthquake.

He told Fox News, “The University is the life of the town.  It is one of the oldest in Italy and Europe.  We have 700 years of history.  We are very important for Italy, for the nation.”

In fact, Pettinari considers the University the heart of the entire territory.  Renowned for its biotech and veterinary medicine faculties, it has students from 55 countries, including the United States. He wants it to retain that draw to keep getting better.

Students are now using facilities outside the center of town and he is worried that without a town, they don’t have much of a student life. They are missing bars, cinemas and cultural activities. The university has managed to construct some new student housing and has a new library, but these are on the outskirts of heavily-damaged Camerino.

Beyond that, he says the reconstruction that is forced upon them may be an opportunity to modernize themselves and even the region.

“It is not only important to have a new home, new houses for people living here. We also need to think about new jobs for people, especially the young people.”

Like others, Pettinari is really anxious for the reconstruction to begin in Camerino. These rural and mountain towns in Italy were already struggling with the loss of young people to cities before the earthquakes struck. Now it is more critical than ever to show them and other citizens that there is a viable future in these towns.