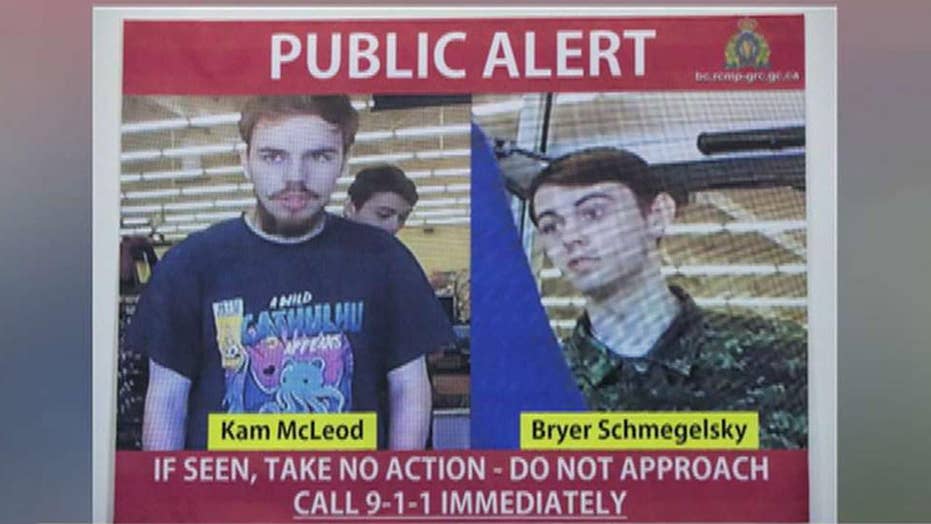 Two men believed to be the teen suspects wanted in three murders were seen rummaging through a dump site in York Landing; Dan Springer has the latest on the manhunt.

A small community in the Canadian province of Manitoba has been swarmed by authorities after a possible sighting of two young men suspected in the killings of three people – including the slayings of an American woman and her Australian boyfriend.

The Royal Canadian Mounted Police said Monday that "all efforts are being made" to find out if the suspects are in York Landing, Manitoba after receiving a "credible" tip that two individuals matching the description of Kam McLeod, 19, and 18-year-old Bryer Schmegelsky were in the area.

"Situation is ongoing," the RCMP Manitoba tweeted. "All possible RCMP resources continue to be used in the area of York Landing to safely apprehend two individuals matching the description of the suspects."

A law enforcement source told Fox News that authorities received a "strong" lead the pair may be in or near the community, which is about 56 miles from Gillam, another town in Manitoba near the location where a vehicle that had been used by the suspects was found burned last week. The weather conditions in the region are poor at the moment, with heavy wind and rain reported.

“We believe, based on their description and behavior, that it’s them," a law enforcement source told Fox News.

At a news conference on Monday, RCMP Cpl. Julie Courchaine said that authorities received a tip around 5 p.m. of two males matching the description of the wanted suspects seen in York Landing, Manitoba. Officers have since been searching the area throughout the night and will continue their efforts on Monday.

"The goal today remains to safely locate and apprehend the individuals and confirm their identities," Courchaine told reporters.

Police are now searching in a small town in Manitoba as the hunt continues for the two teens suspected of murdering three people.

Courchaine added there was a "heavy" police presence in the area, and that the priority at the moment is for the safety of the community. Authorities also noted how difficult it was to get resources to York Landing, as the community is only accessible by air or a 2-hour ferry ride from Splint Lake.

"It is critical that residents of York Landing remain vigilant and stay indoors as much as possible with their doors locked, and to report anything suspicious by calling their local police immediately," she said, acknowledging it was a 'trying time" for the community.

The Royal Canadian Air Force is also assisting today with the search. Chief Leroy Constant with York Factory First Nation shared a photo to Facebook of a Hercules aircraft flying over the area shortly after noon on Monday.

The RCMP said that the safety of the community remains "our priority."

"We remind residents to stay inside & check all doors & windows to ensure they are closed & locked," officials said.

Constant said RCMP would be conducting a search for the pair “in our community of York Landing” after a “possible sighting” around a landfill on Sunday night.

"Everyone please remain indoors with your doors locked," Constant said on Facebook. "And all vehicles should be parked."

Earlier Sunday, RCMP tweeted that officers had spent the day searching cottages, cabins, waterways and along the rail line in Gillam for any signs of the suspects. They added the search of remote areas was being conducted both on the ground and in the air.

More than 100 empty homes were searched in Gillam, with officers also scouring large abandoned buildings, including the Gillam-area Keewatinohk Converter Station Camp -- which has more than 600 rooms, according to the RCMP.

On Friday, police confirmed a resident of Cold Lake, Alberta, had helped the suspects get their Toyota Rav-4 unstuck from a local trail on July 21. Authorities said the suspects "continued on their way after a short, unremarkable interaction."

McLeod and Schmegelsky are being sought in connection with the deaths of American Chynna Deese, 24, her Australian boyfriend, Lucas Fowler, 23, and, separately, Leonard Dyck, 64, of Vancouver, British Columbia.

19-year old Kam McLeod and 18-year-old Bryer Schmegelsky were said to be headed towards Yukon country looking for work in a Dodge pickup truck, which authorities found burning at the side of Highway 37; Rick Leventhal reports.

The teens were originally considered missing but were later named as suspects in the murders on Tuesday. On Thursday, the RCMP said the suspects had been spotted in the area of Gillam, which is more than 2,000 miles from where the three victims were found.