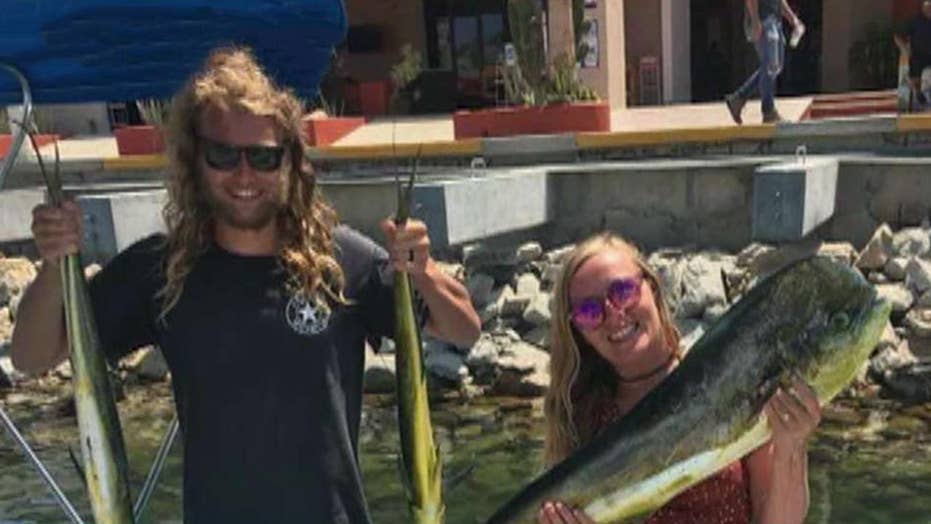 A North Carolina woman and her Australian boyfriend were shot to death before their bodies were discovered last week along a remote stretch of highway, Canadian authorities revealed Monday.

The development came as authorities acknowledged for the first time there was a "possible" connection between the slayings, a body found near a burning truck, and the disappearance of two teenagers in the region.

The Royal Canadian Mounted Police said that 23-year-old Australian Lucas Fowler, and his American girlfriend Chynna Deese, 24, were shot to death before their bodies were discovered on the side of the Alaska Highway near Liard Hot Springs on July 15. The couple is believed to have been killed that day or the day prior.

Four days later and about 300 miles away along another remote highway in rural northern British Columbia, a burning pickup truck was discovered about 30 miles south of Dease Lake. As authorities were investigating the burning truck on Friday, an unidentified body of a man was found a little over a mile from the vehicle. By Sunday, officials said two teenagers who were traveling through the region in the truck discovered burning were also reported missing.

In a news conference on Monday, Royal Canadian Mounted Police Sgt. Janelle Shoihet said it was "possible" the cases could be linked while authorities urged the public to be on alert.

"This is unusual. I know people want to put a link between all of these crimes, but at this point we don't have anything to link them," Royal Canadian Mounted Police Cpl. Chris Manseau said. "But it is very unusual for that area, especially in such a remote area."

Chynna Deese and Lucas Fowler were traveling in a 1986 blue Chevrolet van with Alberta license plates that Fowler had fixed up for the planned through trip Canada before they were killed near Liard Hot Springs, a popular tourist destination. The van is to have believed to have broken down on July 14 along the Alaskan Highway south of the tourist hotspot.

The location where the couple was last seen, and where their bodies were discovered. (Royal Canadian Mounted Police)

On Monday, authorities released surveillance video of the couple at a gas station in Fort Nelson on July 13, which shows the pair arriving in the van and staying at the facility for about 17 minutes before leaving.

The RCMP also released a composite sketch of a man who was seen talking to the couple in the evening of July 14 along Highway 97, the road where the couple's bodies would be discovered the next day. The man is described as having darker skin with dark hair, standing shorter than 6ft 3in Lucas, with a possible beard or glasses. He was also driving an older model Jeep Grand Cherokee with a black stripe on the hood.

A sketch of a man who was was seen talking to the couple in the evening of July 14. (Royal Canadian Mounted Police)

A road worker who was in the region at the time had previously told 9 News Australia she saw a bearded man who appeared to be arguing with the couple hours before they were found dead.

Alandra Hull said the man "looked frustrated or something" and the couple appeared to be bothered by the man, with an interaction that made her uneasy.

“If you just get a bad feeling, and that’s what I had, you just don’t stop,” Hull told 9 News.

In addition to updates on the murdered couple, the RCMP revealed new information on the investigation of the missing teenagers and body discovered near their burning vehicle.

The RCMP said the body of a man was confirmed to not be 19-year-old Kam McLeod nor 18-year-old Bryer Schmegelsky, both of Port Alberni, British Columbia.

Bryer Schmegelsky (left) and Kam McLeod (right) were reported missing after their camper van was found burnt out on Friday and their families lost contact with them, according to police. (Dease Lake RCMP)

The two were traveling to Whitehorse in the Yukon to look for work and had not been in contact with their families for the past few days, police said. There is no cellphone coverage in many parts of the region. Police said it was not clear why they returned to British Columbia and were driving south.

A red and grey Dodge pickup truck and sleeping camper driven by Kam McLeod andBryer Schmegelsky was found abandoned and on fire south of the Stikine River Bridge on Highway 37 on Friday. An unidentified male body was found nearby at a nearby highway pullout. (Dease Lake RCMP)

"At this point, we are looking at them as missing persons," Manseau said when asked if they could be suspects.

Authorities released a sketch of the deceased man and asked for the public's help in identifying him. He is described as in his 50s and 60s with a heavy build with a grey beard and grey hair.

A sketch of the unidentified man who was found dead a little over a mile from the burnt-out camper belonging to the two teenagers. (Royal Canadian Mounted Police)

Shoihet acknowledged it was "unusual" to have two major investigations at the same time in the remote region that sees travelers from abroad in addition to motorists and businesses moving between B.C., Alberta, the Northwest Territories, the Yukon Territory, and Alaska.

Meghan Fisher, an employee of the Pink Mountain Campsite and General Store in the province's Peace River region, told the National Post she was warning people not to pick up hitchhikers and was "a little more paranoid."

“Everyone’s talking about it. It’s just scary," she told the National Post. "What’s going on with the highway?”

Police also acknowledged in a news release that "there are growing community concerns about the ongoing homicide investigations in northern B.C."

"We would like to stress the importance of heightened vigilance and awareness for anyone traveling in the area. We encourage people to camp in known or established locations," Shoihet said. "In addition, general safety precautions continue to apply: make sure family or friends are aware of your travel plans, establish check-in times to provide updates and make sure that if your plans change you let someone know."

Chief Maria Quock of the First Nations community of Iskut said on Facebook over the weekend that people were volunteering to patrol the area at night by car, and would continue over the next few nights to "put our community members minds at ease.”

“We are having two of our young men patrolling our community tonight from Dusk until Dawn,” Quock said Sunday

Quock told the National Post newspaper on Monday the incidents had residents living in fear.

“There’s been a lot of fear because this has never happened before in this area," she told the newspaper. "Nobody knows what’s going on."