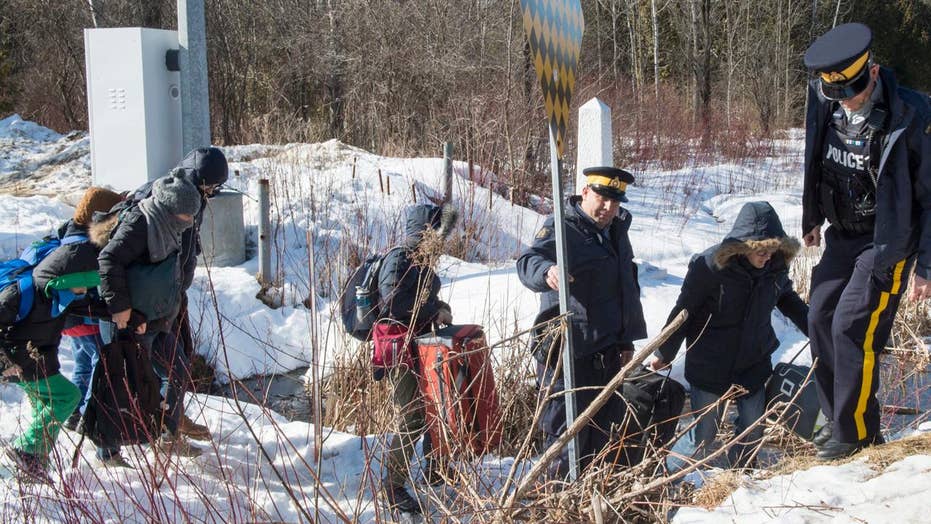 Thousands are leaving the US for Canada seeking safety

An unprecedented number of people are crossing illegally in a dash for asylum; Molly Line tells us why on 'Special Report'

Canada will not tighten security at its border to deter people crossing illegally from the U.S. because the numbers are not big enough to raise concerns, an official said Saturday.

Public Safety Minister Ralph Goodale said the issue has not increased to a point where officials will be required to hamper the flow of goods and people moving across the world’s longest undefended border, Reuters reported.

Many people leaving the U.S. for Canada are doing so because of the political rhetoric of the Trump administration, immigration advocates say.

Many cross illegally, braving snow and frigid cold in a dash for asylum. They avoid border checkpoints and the risk of being sent back to the U.S. due to a pact dubbed the "Safe Third Country Agreement." It requires the majority of migrants to apply for refugee protection in the first country of arrival.

"We are concerned and we will deal properly with the extra hundreds," Goodale said at a news conference in Emerson, which is located near the North Dakota border. "But the full border deals with 400,000 people moving in both directions every day. It also handles (more than $1 trillion) in trade every day.”

Royal Canadian Mounted Police in Manitoba said at least 183 people walked across the border in frigid temperatures since Jan. 1. Goodale said the pace has picked up and it’s largely because of Trump’s executive order which temporarily banned visitors from predominantly-Muslim nations and expanded immigration enforcement across the U.S.

"The current accelerated rate started in the first week of February and we’ve been following this very, very closely,” Goodale said.

Canadian and U.S. officials are working on a way to handle the influx of asylum-seekers crossing into Canada illegally, according to Reuters. Homeland Security Secretary John Kelly is expected to visit Canada later this month for border security talks.

According to the Canada Border Services Agency, more than 1,400 people have made claims at land border ports of entry in the region since November. That's more than all of 2015.

The inundation is keeping the Royal Canadian Mounted Police and their partners busy, forcing them to add manpower along the border. With warmer temperatures approaching in the coming months, resources may be further stretched.