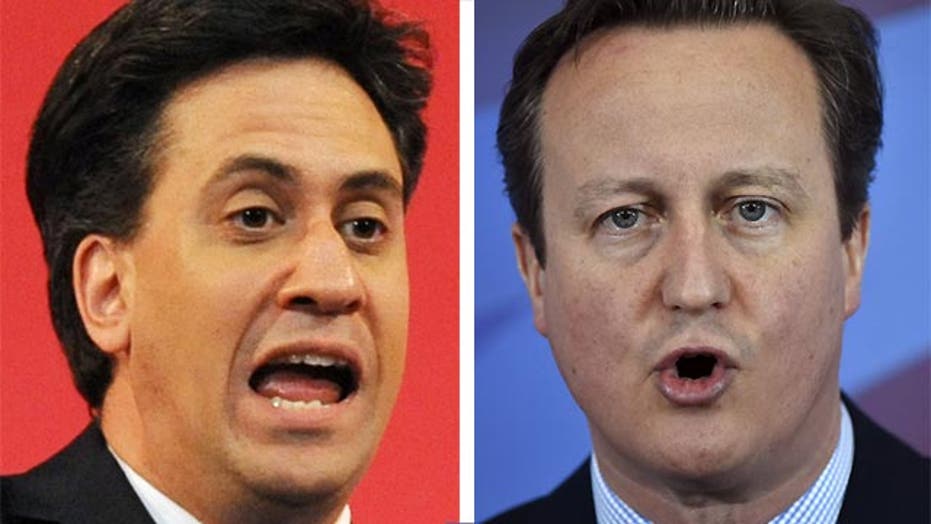 Polls opened across the United Kingdom Thursday as British voters were due to make their choice in a parliamentary election that is likely to be the closest in decades -- and is unlikely to produce a clear winner.

Prime Minister David Cameron's Conservatives and Ed Miliband's Labour Party are running neck and neck, with most opinion polls showing the parties tied or separated by one or two percentage points. That means neither party is likely to win a majority of Parliament's 650 seats.

That in turn could set up days or even weeks of backroom dealing before a coalition government is crafted. The incumbent Cameron has experience of that. When the dust settled from the last election in 2010, the Conservatives sat 20 seats short of an outright majority. However, within five days, Cameron had brokered a deal with the centrist Liberal Democrats, led by current Deputy Prime Minister Nick Clegg.

Much has changed in five years. Both the Conservatives and Liberal Democrats are projected to lose seats, though just how many is unclear. The past year-and-a-half has also seen the rise of the anti-immigration, anti-European Union United Kingdom Independence Party (UKIP), which currently sits third in opinion polls, though Britain's electoral system means it can win at most a handful of seats. However, those seats will likely come by stealing Conservative voters.

Miliband's Labourites have not had it all their own way, either. Last fall's Scottish independence referendum, which ended in defeat for the separatists, has nonetheless resulted in increased power for the Scottish National Party (SNP), led by Nicola Sturgeon. Some pre-election polls have projected a near-total wipeout for Labour in its traditional stronghold north of the border, with the Daily Record newspaper projecting that the SNP could end up with 52 seats in Parliament. That's an increase of 46 seats over 2010, 34 of which would be taken from Labour Members of Parliament.

If the SNP end up as the third or fourth-largest party in Parliament after this election, that would put pressure on Miliband to agree to a coalition government with Sturgeon in order to become Prime Minister. Miliband has said that such a deal is off the table, but Conservatives have warned that a Labour premiership would inevitably resulted in the Scottish nationalists having undue influence over British politics.

Outside of the ballot box intrigue, three issues have come to dominate the election: the economy, the National Health Service (NHS), and immigration.

On the economy, Cameron has focused on headline numbers after five years of budget cuts designed to shrink the deficit and bolster growth. Inflation is down, employment is up and the economy is growing at one of the fastest rates among large industrialized nations.

The Conservatives argue they need time to cement the gains and ensure the benefits trickle down to everyone and have promised no new income or value-added taxes.

Miliband has argued the topline figures don't tell the whole story. Real wages are below pre-recession levels, employment figures have been inflated by low-skill jobs, and rising numbers of people are turning to food banks to make ends meet. Miliband has focused the debate on inequality, saying the recovery hasn't reached working families and promising to increase taxes on the wealthiest members of society.

Both leaders have spent much of the campaign making promises to save the state-funded NHS, which has struggled with spiraling costs. Miliband has promised to recruit 8,000 more doctors and 20,000 more nurses, paying the bill with a tax on properties worth more than 3 million.

The Conservatives have promised to increase spending by at least 8 billion pounds by 2020 and cut down on so-called health tourism, in which migrants travel to the U.K. for medical care paid for by British taxpayers.

Thousands of migrants from the European Union have been attracted by Britain's improving economy, particularly those from the former eastern bloc countries that have recently joined the 28-nation free-trade zone.

The influx is changing Britain and straining schools, hospitals and other public services. UKIP has capitalized on the outrage of unhappy Britons by promising to leave the European Union, "take back control of our borders" and restrict immigration to skilled workers needed by the British economy.

Labour plans to ban recruitment agencies from hiring only from overseas and crack down on employers that abuse workers. The Conservatives say they will reduce migration from other EU states by making it harder for recent immigrants to claim benefits. The party says it has an "ambition" to reduce annual net migration to less than 100,000 from almost 300,000 in the 12 months through September, though it may be necessary to water down those targets in order to forge a second coalition with their most likely partners, the Liberal Democrats.

Cameron and Miliband were both up early to vote Thursday. The prime minister voted in his Oxfordshire constituency with his wife, Samantha, while Miliband cast his ballot alongside his wife, Justine, in northern England. Liberal Democrat leader Nick Clegg walked hand-in-hand with his wife Miriam to the polls in the city of Sheffield.

Voters headed for schools, halls, pubs, gyms and churches to make their voices heard. In the bright early-morning sunshine in London, voters cast ballots at a polling station close to Parliament as police stood guard.

Signs of the unfolding political drama were all around. The squares opposite Parliament were packed with temporary outdoor television studios, while commuters picked up newspapers urging voters to the polls.

Alexis Thomas, 34, a doctor, was mindful of all the predictions of a dead heat and wanted to make her voice heard.

"Because it's so tight, I think that if I didn't come out and vote, and didn't get the result that I wanted, then I'd only have myself to blame," Thomas said — though she wasn't saying what result that was.

About 50 million people were registered to vote, and early indications are that turnout will be high.

In Scotland's capital, Edinburgh, officials said a majority of people who applied to vote by mail had already returned their ballots.

"We already have an 80 percent turnout for postal votes, which I think demonstrates the interest in the election," said Sue Bruce, returning officer for Edinburgh.

Polls are open from 7 a.m. local time until 10 p.m. Most results will be announced within hours.