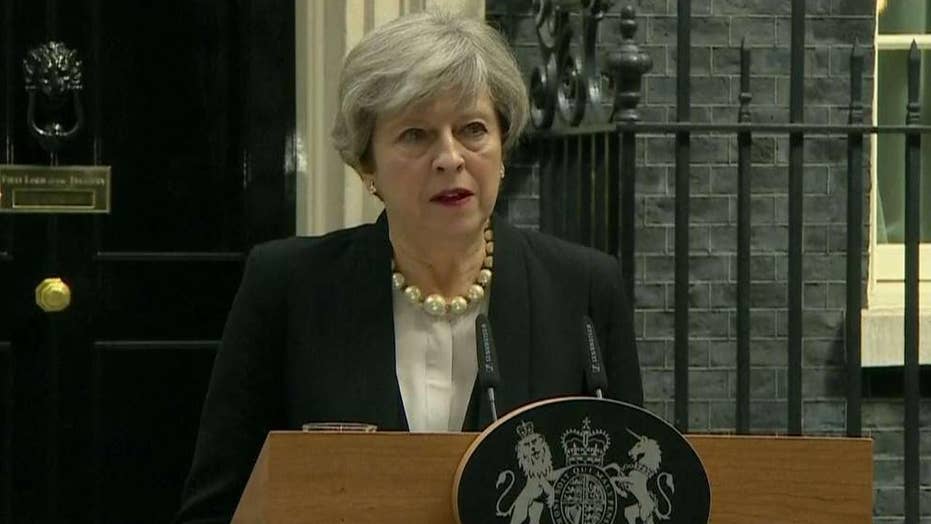 Theresa May: The terrorists will never win

British Prime Minister Theresa May said Tuesday that investigators in the U.K. probing Monday’s attack at a pop concert believe they know the identity of the suspect, but will not release the name until further confirmation.

May, who briefed the media outside 10 Downing Street, said the terror attack that killed at least 22 and injured 59—including many children and young people—“stood out for its “appalling, sickening cowardice."

"While we experienced the worst of humanity in Manchester last night, we also saw the best," she said.

Queen Elizabeth II released a statement on Tuesday, offered her condolences to the victims of Monday's attack.

"I know I speak for everyone in expressing my deepest sympathy to all who have been affected by this dreadful event and especially to the families and friends of those who have died or were injured," the statement read. "I want to thank all the members of the emergency services, who have responded with such professionalism and care. And I would like to express my admiration for the way the people of Manchester have responded, with humanity and compassion, to this act of barbarity."

Authorities in Manchester said Tuesday that it appears that an attacker detonated an improvised explosive device at the concert. It is not immediately clear if the attacker acted alone, but the person apparently died in the explosion. Police say some 400 officers were deployed overnight to help with the investigation.

There was panic after the explosion, which struck around 10:30 p.m. Monday night as Grande was ending the concert, part of her Dangerous Woman Tour. The singer, who was not injured, tweeted hours later: "Broken. From the bottom of my heart, I am so so sorry. I don't have words."

Labour Party leader Jeremy Corbyn says he and May have agreed to suspend election campaigning until further notice.

Corbyn said Tuesday he is "horrified" by the events in Manchester and that his thoughts are with the families and friends of those who have died and been injured.

May canceled campaign events Tuesday after the blast, which killed at least 22 people and injured more than 50. She is due to chair a meeting of the government's emergency committee, COBRA, later.