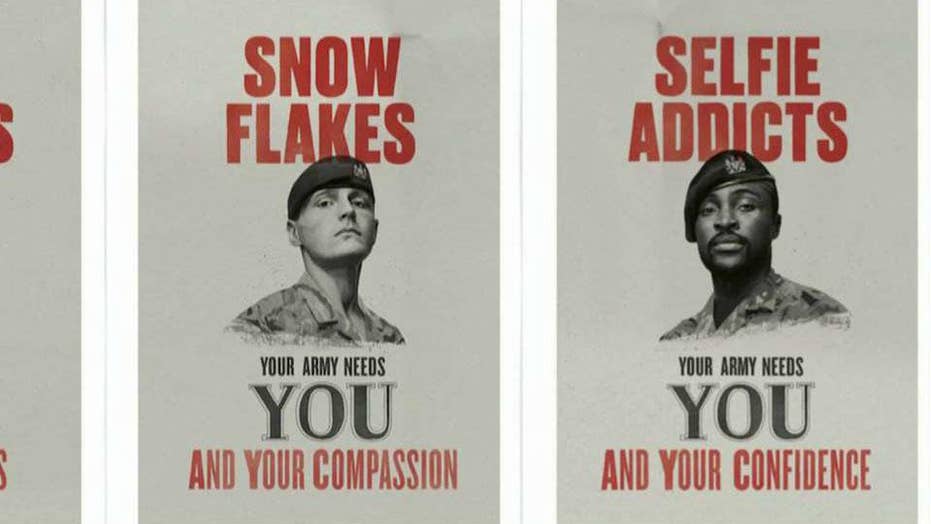 Calling all “Binge Gamers”, “Snowflakes” and “Selfie Addicts” – lay down your controllers, stop being outraged over everything and put that photo upload on hold – instead, why not join the British Army?

Those are the kind of people Britain's armed forces are now going after in a new advertising campaign launched Thursday targeting everyone from “Class Clowns” to “Me Me Me Millennials”.

“The army sees people differently and we are proud to look beyond the stereotypes and spot the potential in young people, from compassion to self-belief,” British Army Major General Paul Nanson told Sky News.

The ad campaign, which features YouTube videos and posters modeled off the famous ‘Your Country Needs You’ slogan from the First World War, comes as Britain is struggling to recruit new soldiers. (British Army)

The ad campaign, which features YouTube videos and posters modeled off the famous ‘Your Country Needs You’ slogan from the First World War, comes as Britain is struggling to recruit new soldiers.

A government committee was informed in October that the British Army has 77,000 fully-trained troops, below its target of 82,500. A National Audit Office report in December also revealed that nearly half of the Army’s applicants chose to drop out of the hiring process in 2017 and 2018 because it was taking up to 321 days to transition from applying to starting training, according to Sky News.

US ARMY STEPPING UP RECRUITMENT IN 22 LEFT-LEANING CITIES

One of the new video ads shows a young supermarket worker playing with shopping carts in a parking lot instead of returning them to the designated area.

“Millennials, useless,” a man who appears to be the manager says, while looking out the window of the store.

An employee then chides the worker as she eventually puts the carts away.

GERMANY LOOKING INTO RECRUITING NON-GERMAN EU CITIZENS FOR ITS ARMY

The video wraps with a British Army sniper having his finger on the trigger, saying “patience, always welcome.” The text “Your Army Needs You” then flashes across the screen.

Another ad shows a boy glued to a TV set playing a video game and his father lamenting that he has been up all night doing so. “Stamina, don’t underestimate it” a voice in the ad says, praising the gamer’s dedication to battling the fantasy monsters onscreen.