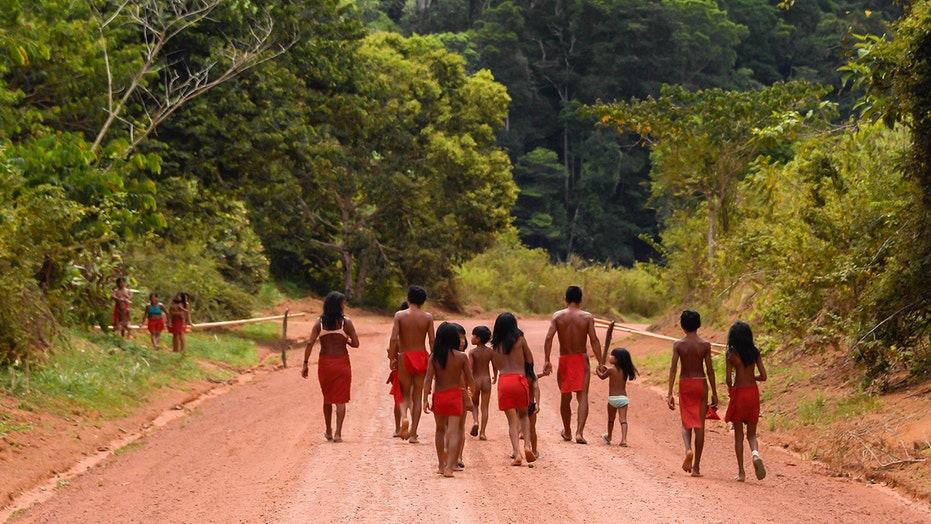 Brazilian authorities are investigating the death of an indigenous man after villagers reported illegal miners invaded their land and fatally stabbed their leader.

Officials of the National Indian Foundation arrived Sunday at the indigenous reserve in Amapa state, located in northern Brazil, where the Wajapi people live. Public Ministry officials and police accompanied them.

A day earlier, indigenous leaders and politicians reported a Wajapi village was attacked. They said the dozens of attackers consisted of people who mine illegally for precious metals. The attackers were described as heavily armed and outfitted in military fatigues, The New York Times reported.

Waiapi men walk into the jungle at the Waiapi indigenous reserve in Amapa state in Brazil on October 14, 2017. (APU GOMES/AFP/Getty Images)

Rodolfe Rodrigues, a Senator for the state of Amapa, told The Times that miners had stabbed the indigenous leader to death and dumped his body in a river while other villagers fled. Rodrigues identified the slain leader as Emyra Wajapi.

While Federal Police have yet to release the identity of the man, officials confirmed a man died last Monday and officers were investigating to clarify the circumstances surrounding his death.

Rodrigues, a member of Brazil’s opposition party, blamed the alleged incursion on Brazilian President Jair Bolsonaro, telling The Times that “the president is responsible for this death.”

Brazilian Waiapi walk on the road of the Waiapi indigenous reserve, at Pinoty village in Amapa state in Brazil on October 12, 2017. (APU GOMES/AFP/Getty Images)

Bolsonaro has faced recent criticism for the Amazon rainforest's deforestation after preliminary data released in July showed a drastic acceleration in the levels of forest removed, Reuters reported. Bolsonaro has denied the claims, telling reporters “the data is a lie.”

U.N. human rights chief Michele Bachelet on Monday called for an investigation into the alleged murder, calling it a “disturbing symptom of the growing problem of encroachment on indigenous land,” the outlet reported. She urged the Bolsonaro government to halt the “invasion” of miners and loggers.

The Wajapi lived in isolation within the Amazon until 1970, when the area became accessible with a road built by the Brazillian government, The Times reported. The land became protected under Brazil’s constitution in 1996, according to the paper.