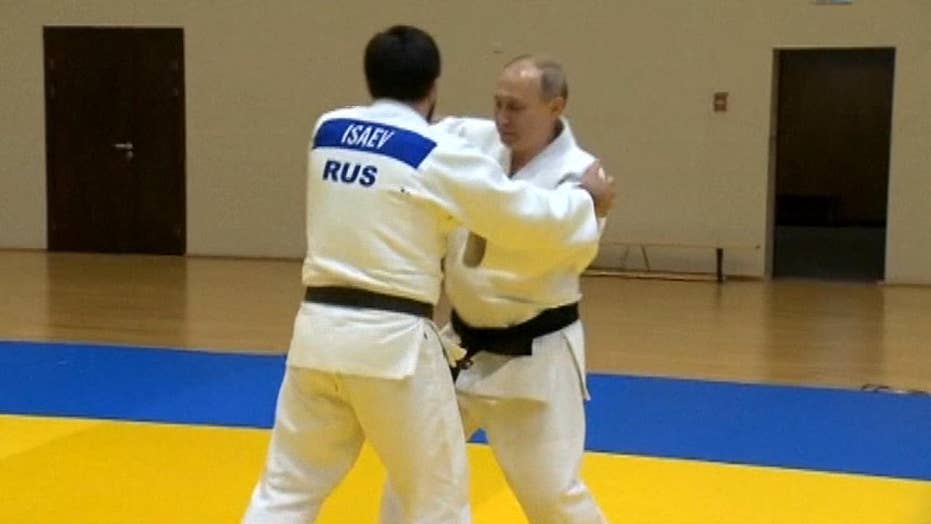 In his latest round of machismo self-promotion, Russian President Vladimir Putin got a chance to flash his martial-arts skills during a workout with the Russian judo team in Sochi.

After talks on Syria Thursday with President Hassan Rouhani of Iran and Turkish strongman Recep Tayyip Erodgan, Putin, a judo black belt, went to the mat with members of his country’s top judokas.

A 90-second clip that ran on Russian TV showed Putin throwing one athlete after another to the floor, Euronews.com reported. He was only toppled to the ground by a female judoka.

That would be Rio 2016 Olympic bronze medalist Natalia Kuziutina.

"She kept going on and on and finally managed to throw Vladimir Putin over her head,” the Daily Mirror reported, quoting Russia newspaper Moskovsky Komsomolets.

Putin wasn’t upset and kissed her on the top of her head when they were done, according to the report.

Tass reported that the president injured a finger but continued training.

KREMLIN: RUSSIA'S POLITICAL SYSTEM A GOOD MODEL FOR OTHERS

"It’s a well-known medical fact, the level of adrenaline increases in a person who practices physical exercises, so your mood improves, and you take a different look on the world around you, Putin told reporters how it went, according to the Russian news agency.

“I can probably say that it helps you to get real," he added.

In projecting a tough-guy image in the past, Putin has been showed playing ice hockey, handling a tiger, riding a horse bare-chested and diving to the bottom of the Black Sea.