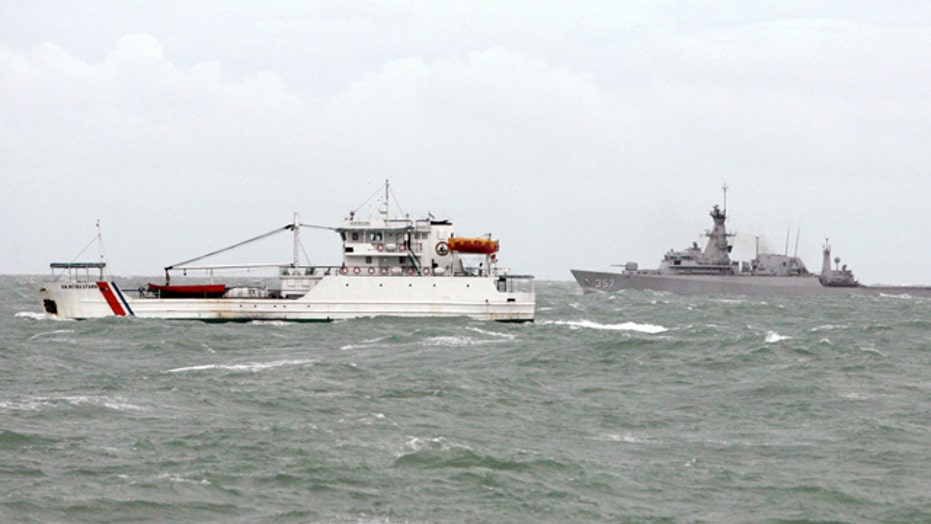 Stormy weather has hindered the efforts of rescuers to recover the victims of AirAsia Flight 8501, even as a seventh body was pulled from the Java Sea Wednesday.

Heavy rain, wind, and thick clouds have prevented divers from carrying out their recovery operations and largely grounded helicopters, though ships were still scouring the area.

Indonesian search and rescue chief Bambang Soelistyo said that the bodies of four men and three women had been recovered as of Wednesday morning. Soelistyo said that one of the women was clad in the distinctive red uniform of an AirAsia flight attendant. Another victim was wearing a life jacket, which may raise questions about whether the passengers may have known that the plane was going down, despite the lack of a distress call from the pilots.

"One individual with a life jacket doesn’t tell much," Greg Waldron, the Asia managing editor for industry publication Flightglobal, told The Wall Street Journal. "It could be a person who thought that the plane was going down and put the life jacket on. I really don’t know what to make of it.

"If the pilots had ordered passengers to wear their life jackets," Waldron added. "I'd imagine they would have the presence of mind to make a distress call."

Meanwhile, officials said that sonar images had identified what appeared to be large parts of the Airbus A320, but strong currents appeared to be moving the wreckage. Indonesia's meteorology and geophysics agency predicted that the conditions would worsen, with more intense rains, through Friday.

"It seems all the wreckage found has drifted more than 50 kilometers (31 miles) from yesterday's location," said Vice Air Marshal Sunarbowo Sandi, search and rescue coordinator in Pangkalan Bun on Borneo island, the closest town to the site. "We are expecting those bodies will end up on beaches." Sandi announced that the search for bodies had been expanded to approximately 94 miles of the nearby coastline to allow for that possibility.

The airliner's disappearance halfway through a two-hour flight from Surabaya, Indonesia to Singapore early Sunday triggered an international search for the aircraft involving dozens of planes, ships and helicopters from numerous countries. It is still unclear what brought the plane down.

The jet's last communication indicated the pilots were worried about bad weather. They sought permission to climb above threatening clouds but were denied because of heavy air traffic. Four minutes later, the jet disappeared from the radar without issuing a distress signal.

The aircraft's cockpit voice and flight data recorders, or black boxes, must be recovered before officials can start determining what caused the crash. Items recovered so far include a life jacket, an emergency window, children's shoes, a blue suitcase and backpacks filled with food.

Experts say that the recovery of the recorders would be aided by the relatively concentrated area of wreckage and the shallowness of the water.

Simple wooden coffins — numbered 001 and 002 — with purple flowers on top contained the first two bodies, which were sent from Pangkalan Bun to Surabaya for autopsies. The two victims were a woman wearing blue jeans and a boy.

Nearly all the passengers were Indonesian. The country is predominantly Muslim, but most of those aboard were Christians of Chinese descent.

One Surabaya church -- Manwar Sharon Church -- lost 40 members in the crash. On Wednesday, around 100 relatives gathered for a prayer service in an hall at the Surabaya airport where the Rev. Philip Mantofa urged the crowd to hold onto their faith, despite their pain.

"Some things do not make sense to us, but God is bigger than all this," he said. "Our God is not evil ... help us God to move forward even though we are surrounded by darkness."

About 125 family members had planned to travel to Pangkalan Bun, 100 miles from the area where bodies were first spotted, to start identifying their loved ones. However, Surabaya airport general manager Trikora Hardjo later said the trip was canceled after authorities suggested they stay to avoid slowing down the operation.

Instead, some relatives gave blood for DNA tests in Surabaya, where the bodies will be transported, and submitted photos of their loved ones along with identifying information, such as tattoos or birth marks that could help make the process easier.

Nearly all the passengers from Indonesia were frequent visitors to Singapore, particularly on holidays.

It was 13-year-old Adrian Fernando's first trip to the city-state and was supposed to be a fun vacation with his aunt, uncle and cousin before he went back to school.

"He is my only son," said mother Linca Gonimasela, 39, who could not join them because of work. "At first, he didn't want to go, but later on he was persuaded to join them for the New Year holiday."

A number of Indonesian cities have opted to cancel or tone down their planned New Year's Eve celebrations. However, a giant street bash was still in the works for the capital, Jakarta.

In Surabaya, hundreds stood in a drizzle holding candles in a park.

"Let us pray for the grieving families of those on board the plane," Mayor Tri Rismaharini told the crowd. "Let us pray this will be the last tragedy for Surabaya."