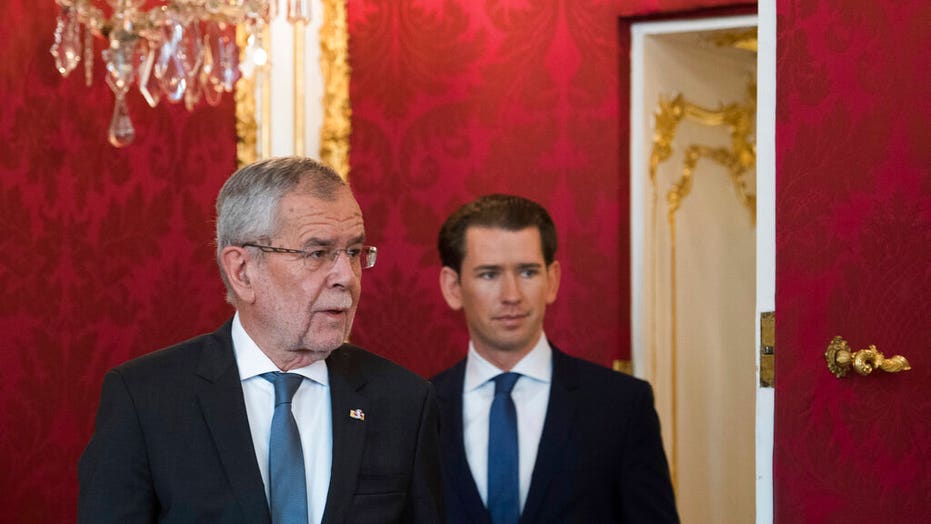 As Europeans vote in one of the most consequential elections in recent E.U. history, Austria's populist coalition government, seen as a blueprint for several right-wing groups across the continent, is fighting for its political future.

The country's charismatic 32-year-old chancellor, Sebastian Kurz will face a no-confidence vote on May 27 after his coalition government collapsed thanks to a corruption scandal exposed by a viral video that cost Heinz-Christian Strache, the country's vice chancellor, his job.

Kurz came to power in 2017 and formed a right-wing coalition government between his traditional center-right Austrian People’s Party (OVP) and the Austrian Freedom Party (FPO), which was founded after World War II by Neo-Nazis, shocking many within the European establishment.

Austrian President Alexander Van der Bellen, right, and Austrian Chancellor Sebastian Kurz, left attending an inauguration ceremony at Hofburg palace in Vienna, Austria, Wednesday, May 22, 2019. Austrian Chancellor Sebastian Kurz has called for an early election after the resignation of his vice chancellor Heinz-Christian Strache from the Freedom Party spelled an end to his governing coalition. (AP)

The world’s youngest national leader, Kurz's bloc ran as a new brand of traditional conservatives championing economic liberalism and co-opting the far-right’s platform of being tough on immigration.

The tactic has been tried across Europe, where traditional center-right parties have aligned themselves with the far-right in an attempt to contain the rising sense of nationalism that was unleashed during the height of the refugee crisis in 2015.

Kurz’s political future will be determined the day after European Union elections, which are currently being held across the 28-member bloc from May 22-26. The political fallout from the FPO’s major scandal could be a setback for right-wing nationalist parties in the E.U. elections who are forecast to make major gains in the European Parliament.

According to a recent survey by the European Council on Foreign Relations, the fear of rising nationalism and Islamic radicalism surpasses the fear of migration in several countries, including Austria, and voters are more likely to turn out to the polls.

Europe’s nationalist and anti-immigrant forces, led by Hungary’s Prime Minister Viktor Orban and Italy’s Deputy Prime Minister and Interior Minister Matteo Salvini, have made anti-E.U. rhetoric a central part of their political campaigns. Despite their anti-E.U. rhetoric and Salvini’s past threats to leave the political union, they are running on platforms of transforming the institution and providing greater safety and economic security for their citizens.

E.U. elections tend to be low turnout affairs, but Orban, Salvini, and other populists are calling attention to the failures of the E.U. and trying to rally nationalist support in order to bring fundamental changes to Brussels.

Populists across Europe blame the E.U. for many of their countries ills, including low wages, high unemployment, and the rising cost of living. Even with this vitriol toward Brussels, public opinion polls show support for the E.U. at its highest levels since 1983 and almost 92 percent of voters feel they will be left behind if the E.U. were to collapse.

Still, the election will come down to how voters feel about the current state of the E.U. and the direction it will go. The far-right is hoping to appeal to disenfranchised voters and return to a traditional, values-based Europe.

Even with the turmoil racking Austrian politics, it is unlikely to have a major impact on the E.U. elections currently taking place. Austria is a small country with minimal influence and the troubles of the FPO are effectively a domestic political concern.

“Domestic affairs dominate and inter-party alliances seem to play a truly minor role. I would, therefore, assume that other parties of the more radical right are largely unaffected and will bring home more or less their share of votes ‘earned’ in domestic politics,” Wolfgang Müller, the head of the University of Vienna’s Department of Government, told Fox News.