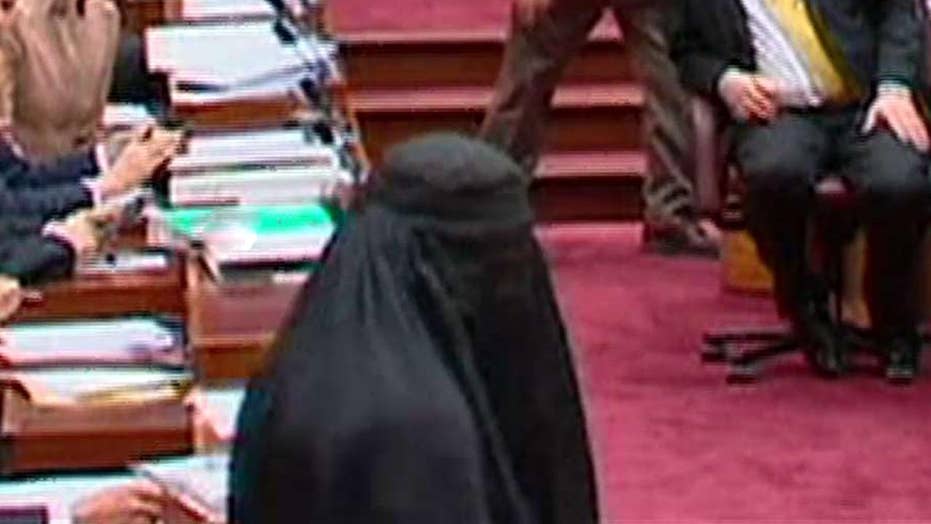 An Australian senator provoked an angry backlash from fellow lawmakers Thursday by wearing a burqa in Parliament as part of her campaign for a national ban on Islamic face coverings.

Pauline Hanson, leader of the anti-Muslim, anti-immigration One Nation minority party, sat wearing the black head-to-ankle garment for more than 10 minutes before taking it off as she rose to explain her reasoning for a ban on such outfits on national security grounds.

In this combination of photos, Sen. Pauline Hanson takes off a burqa she wore into the Senate chamber at Parliament House in Canberra. (AP)

Hanson said she wore the garment to highlight the fact she believes "it does not belong" in Parliament, Sky News Australia reported.

"I'm quite happy to remove this because this is not what should belong in this Parliament," she said.

Hanson, an outspoken fan of President Trump, added "There has been a large majority of Australians [who] wish to see the banning of the burqa."

Attorney General George Brandis drew a standing ovation from the chamber when he said his government would not ban the burqa, and he chastised Hanson for what he described as a "stunt" that offended Australia's Muslim minority.

"To ridicule that community, to drive it into a corner, to mock its religious garments is an appalling thing to do and I would ask you to reflect on what you have done," Brandis said.

Opposition Senate leader Penny Wong told Hanson: "It is one thing to wear religious dress as a sincere act of faith; it is another to wear it as a stunt here in the Senate."

Labor MP Anne Aly also voiced her criticisms of the One Nation senator to Sky News Australia, calling the action "a mockery of our Parliament."

"All this was a stunt designed to get attention for Pauline Hanson because that's all she wants," Aly said.

Sam Dastyari, an opposition senator and an Iranian-born Muslim, said: "We have seen the stunt of all stunts in this chamber by Sen. Hanson."

Senate President Stephen Parry said Hanson's identity had been confirmed before she entered the chamber. He also said he would not dictate the standards of dress for the chamber.