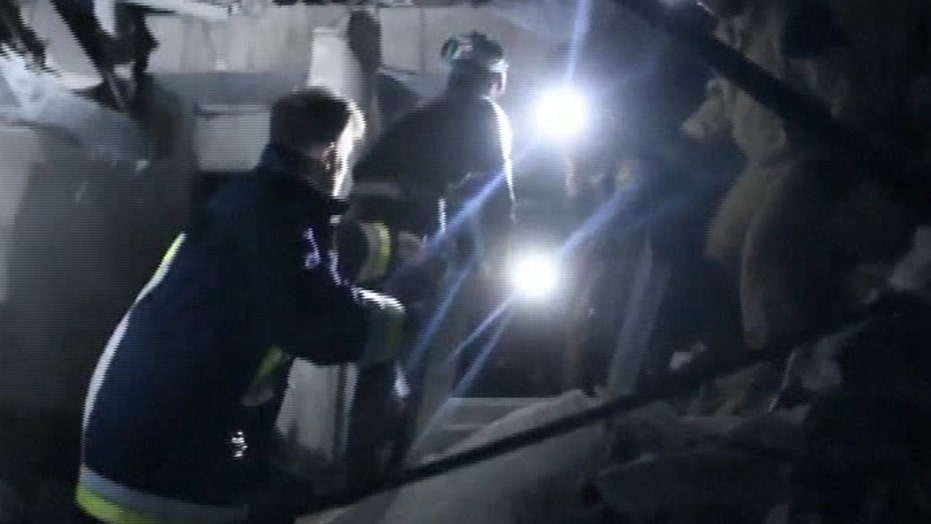 At least 27 people, including children, were killed at a hospital in Aleppo, Syria overnight, activists said Thursday, in what Secretary of State John Kerry called a "deliberate [air]strike" by government forces on a "known medical facility."

The incident was part of a wave of nighttime airstrikes by Syrian warplanes in embattled Aleppo that killed at least 61 people overall. An official from the Syrian opposition claimed Russia may have also participated in the strikes.

Some of the overnight strikes hit the well-known al-Quds field hospital in the Sukkari district in Aleppo, according to Doctors Without Borders, opposition activists and rescue workers. They said 14 doctors and patients were among the dead.

"Whoever carries out these massacres needs a war tribunal and a court of justice to be tried for his crimes."

Kerry said in a statement later Thursday that the attack on the hospital appeared to be "a deliberate strike on a known medical facility."

"[This] follows the Assad regime’s appalling record of striking such facilities and first responders. These strikes have killed hundreds of innocent Syrians," Kerry said.

A separate blitz in Aleppo reportedly killed 20, raising the 24-hour death toll in the key city to at least 61. Senior opposition official Anas al-Abdeh, the head of the Syrian National Council, claimed Syria's ally Russia may have taken part in the strikes as well.

Russian defense spokesman Maj. Gen. Igor Konashenkov denied his country flew any jets near Aleppo over the past several days.

The chief Syrian opposition negotiator Mohammed Alloush told The Associated Press the latest violence showed how negotiations, such as the February talks that led to a short-lived cease fire, were not realistic.

"Whoever carries out these massacres needs a war tribunal and a court of justice to be tried for his crimes. He does not need a negotiating table," Alloush told the AP in a telephone interview. "Now, the environment is not conducive for any political action."

"Russia has an urgent responsibility to press the regime... to stop attacking civilians, medical facilities, and first responders, and to abide fully by the cessation of hostilities," Secretary of State John Kerry responded.

The International Committee of the Red Cross warned that Aleppo was on the brink of a humanitarian disaster as a result of the renewed fighting.

Civilian Deaths in Syria in 2015 | Graphiq

"Wherever you are, you hear explosions of mortars, shelling and planes flying over," Valter Gros, who heads the ICRC office there, was quoted as saying Thursday in a statement, Reuters reported.

"There is no neighborhood of the city that hasn’t been hit. People are living on the edge. Everyone here fears for their lives and nobody knows what is coming next," he added.

Doctors Without Borders, also known by its French acronym MSF, said in a series of tweets that the death toll was expected to rise.

"Destroyed MSF-supported hospital in Aleppo was well known locally and hit by direct airstrike on Wednesday," it said.

The Civil Defense, a volunteer first-responders agency whose members went to the scene of the attack, put the death toll at 40 and said the dead included six hospital staff, including a dentist and one of the last pediatricians remaining in the city.

The agency, also known as the White Helmets, said the al-Quds hospital and adjacent buildings were struck in four consecutive airstrikes. It said there were still victims buried under the rubble and that the rescue work continued.

A video posted online by the White Helmets showed a number of lifeless bodies, including those of children, being pulled out from a building and loaded into ambulances amid screaming and wailing. It also showed distraught rescue workers trying to keep onlookers away from the scene, apparently fearing more airstrikes.

Marianne Gasser, head of the ICRC mission in Syria, said the attack on the ICRC-supported hospital is "unacceptable and sadly this is not the first time the lifesaving medical services have been hit."

The ICRC also said stocks of contingency food and medical aid are expected to run out soon and warned that an escalation in fighting means that they cannot be replenished.

Alloush, who was one of the leading negotiators of the opposition in the Geneva talks, described the airstrikes as one of the latest "war crimes" of Assad's government.

But a Syrian military source told Reuters Thursday that government warplanes had not been used in areas where the airstrikes were reported.

The Feb. 27 cease-fire has been falling apart in the past weeks as casualty figures from violence mount, particularly in Aleppo and across northern Syria. Airstrikes earlier this week also targeted a training center for the Syrian Civil Defense, leaving five of its team dead in rural Aleppo.

Since April 19, nearly 200 people have died, including at least 44 in an airstrike on a market place in rebel-held area in northern Idlib province, as well as dozens of civilians in government-held areas from rebel shelling.

The U.N. envoy for Syria, Staffan de Mistura, briefed the U.N. Security Council via videoconference late Wednesday about the largely stalled indirect talks between the Western- and Saudi-backed opposition and envoys from Assad's government, which has the backing of Moscow.

He said that after 60 days, the cessation of hostilities agreed to by both sides "hangs by a thread."

"I really fear that the erosion of the cessation is unraveling the fragile consensus around a political solution, carefully built over the last year," de Mistura said in his council briefing obtained by The Associated Press. "Now I see parties reverting to the language of a military solution or military option. We must ensure that they do not see that as a solution or an option."

The talks foundered last week after the main opposition group, called the High Negotiating Committee, suspended its formal participation in the indirect talks with Assad's envoys to protest alleged government cease-fire violations, a drop in humanitarian aid deliveries and no progress in winning the release of detainees in Syria.