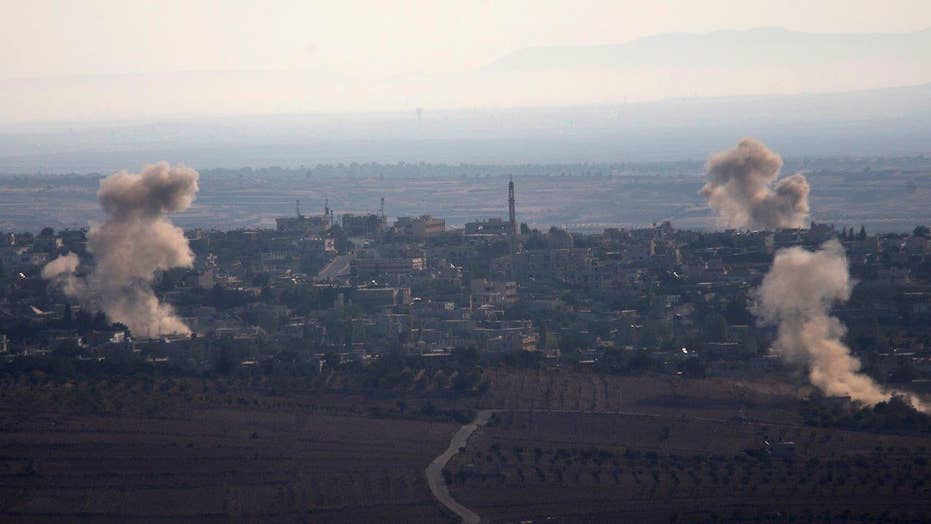 At least 23 civilians were killed in renewed government airstrikes on the contested city of Aleppo, Syrian activists said Sunday, as the United Nations Security Council convened an emergency meeting on the spiraling violence in Syria.

The Syrian government's allies in the Security Council, Russia, China and Venezuela, accuse the rebels of breaking a September 9 cease-fire brokered by Secretary of State John Kerry and Russian Foreign Minister Sergei Lavrov. Since the cease-fire's collapse, there have been continued atrocities, including an airstrike on a humanitarian relief convoy. The U.N., which supported the convoy, says that if the attack is proven to have been intentional, it could constitute a war crime.

At the start of the emergency meeting the U.N.'s top envoy to Syria accused the government of unleashing "unprecedented military violence" against civilians in Aleppo.

Staffan de Mistura said Syria's declaration of a military offensive to retake rebel-held eastern Aleppo has led to one of the worst weeks of the 5 1/2-year war with dozens of airstrikes against residential areas and buildings causing scores of civilian deaths.

The Britain-based Syrian Observatory for Human Rights reported 23 civilians had been killed by 6 p.m. and said it expects the toll to rise. Ibrahim Alhaj of the Syrian Civil Defense search and rescue outfit said hospitals and rescuers have documented the deaths of 43 people so far.

Meanwhile, during his address to the U.N. General Assembly on Saturday, Syria's Foreign Minister, Walid Muallem, accused the United States and its allies of supporting terrorism. Referring to a recent incident in which dozens of Syrian soldiers were killed in airstrike, Muallem said, "This vile aggression proves that the U.S. and its allies are accomplices of Islamic State and other terror groups."

He also railed on Israel for aiding terror and threatening the region with nukes. Muallem praised Russia and Lebanese forces for helping the Syrian army fight terrorism.

Hospitals in the Aleppo area are overwhelmed with casualties and medical workers are expecting many of the wounded to die from a lack of treatment, according to Mohammad Zein Khandaqani, a member of the Medical Council, which oversees medical affairs in the opposition areas.

"I've never seen so many people dying in once place," he said from a hospital in the city. "It's terrifying today. In less than one hour the Russian planes have killed more than 50 people and injured more than 200."

The Observatory, which relies on a network of contacts inside Syria, said earlier in the day that 213 civilians have been killed by airstrikes and shelling on opposition areas in and around Aleppo since a U.S.-Russian brokered cease-fire collapsed Monday evening.

De Mistura, at the Security Council meeting, warned that if the Syrian government is intent on taking Aleppo, it is going to be "a grinding" a street-by-street fight where all the infrastructure in the city will be destroyed, but it won't lead to victory.

"A so-called military solution is impossible including in Aleppo," he stressed.

He urged the United States and Russia to go "that extra mile" and save the Sept. 9 cessation of hostilities agreement "at the 11th hour."

Prior to the start of the U.N. meeting, British Foreign Secretary Boris Johnson said Russia should be investigated for war crimes following a Monday attack on a Syrian aid convoy that claimed 20 lives.

Johnson said that Russia's air force may have deliberately targeted the civilian convoy on Sept. 19. Russia denies involvement and instead suggests Syrian rebels or a U.S. drone were responsible.

Ayrault said the emergency Security Council meeting Sunday is a "moment of truth" for the U.N.

The meeting was requested by the United States, Britain, and France, as pro-government forces extend their bombardment of the contested city of Aleppo. They are widely believed to be accompanied by Russian air strikes.

Rebels meanwhile shelled Masyaf, a government stronghold near the central city of Hama, for the second day in a row, according to the Observatory.

Masyaf is home to a large number of Alawites, members of President Bashar Assad's sect. Assad has rallied Syria's minorities behind his government behind fears of the Sunni-dominated rebellion.

The U.S., Britain, and France are aligned on the Security Council against Russia and China, which back Assad in the country's protracted war, now in its sixth year.

But a broad coalition of Syrian rebels denounced international negotiations for peace as "meaningless," earlier Sunday.

The statement released jointly by 33 factions called on the government and Russian forces to halt airstrikes and lift sieges on opposition areas. The U.N. estimates 600,000 Syrians are trapped in various sieges enforced by the government, rebels, and the Islamic State group across the country.

"Negotiations under the present conditions are no longer useful and are meaningless," the statement said.

The factions said they would not accept to have Russia mediate any negotiations, calling it a "partner to the regime in the crimes against our people."

The statement was signed by some of the largest factions from across Syria but did not include the powerful, ultraconservative Ahrar al-Sham nor the al-Qaida-linked Fatah Sham Front.

Efforts to revive the truce have floundered. An airstrike destroyed a U.N.-backed humanitarian convoy Monday inside opposition territory shortly after the Syrian military announced the agreement had expired. The U.N. says the attack could amount to a war crime if proven deliberate, though it has not assigned responsibility yet. The U.S. says it believes Russian jets were behind the strikes.

Rebels Sunday retook an area in Aleppo that fell to government forces the day before, extending a punishing stalemate in the contested northern city.

The Observatory says rebels seized Handarat, a largely uninhabited former Palestinian refugee camp, early Sunday -- a day after it was lost to government forces. The camp has changed hands multiple times and is largely devastated and abandoned.

The area is near Castello Road, a vital supply route to the city's besieged rebel-held areas. Government forces seized the Castello Road earlier this year, besieging rebel-held districts where some 250,000 people reside.