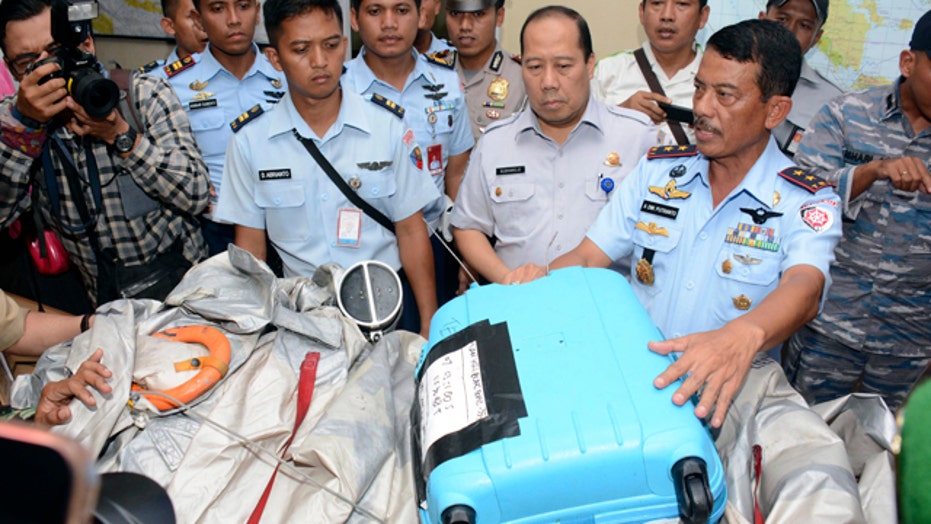 How debris will help reveal what happened to AirAsia jet

While authorities desperately rushed to recover bodies from the crash site of AirAsia Flight 8501 on Wednesday, focus shifted from locating the plane’s wreckage to determining the causes behind the disaster that likely killed all 162 aboard.

Debris from the flight, which was reported missing on Sunday during a trip from Surabaya, Indonesia, to Singapore, turned up in the Java Sea on Tuesday afternoon about six miles from the plane's last known point of contact. At least 40 bodies, and what appeared to be a life jacket and an emergency exit door, were spotted, confirming the flight's fate.

Investigators were turning their attention Wednesday to the flight data and cockpit voice recorders, which will provide clues to what happened during the six minutes between the time the pilot of the Airbus A320-216 last made contact with air traffic control and when the jet dropped off of the radar.

The black boxes can reveal how fast the plane was going before crashing, its altitude, the status of its systems and what the pilots’ final words were. Investigators will use this information to reconstruct a timeline of what happened and why.

“They want to find out as quickly as they can if this is a mechanical flaw or an issue of a pilot error,” Scott Brenner, a former Federal Aviation Administration official, told FoxNews.com.

He said the French were likely to lead an investigation, because they’d want to fix any mechanical issue immediately in case flaws need to be addressed in any of the other French-made Airbuses that are still in use today.

The extent of the plane’s damage will also be analyzed. Peter Goelz, a former managing director of the National Transportation Safety Board, told The Associated Press that if the plane came down relatively intact, the wreckage would show signs of compression.

However, if the metal were torn to pieces, Goelz added, that’s a sign of a breakup at altitude, similar to what was seen during the crash of TWA Flight 800, which exploded over the Atlantic Ocean in 1996 after takeoff.

Engines, flaps, rudders and other controls are all important. Searchers will use sonar to map the debris field. Then, based on information gleaned from the black boxes, they will know which parts of the plane they're most interested to recover, Ray "Chip" McCord, a former Navy supervisor of salvage and now an instructor at MIT, told The Associated Press.

Clues may be found on the passengers’ bodies, Brenner said. If any were wearing life jackets, that might indicate that the pilots had time to warn passengers of a water landing. Whether the bodies were found clothed or not might provide valuable evidence as well, he said, because if a person is ejected mid-air at 500 miles per hour, the force would rip off their clothing immediately.

So far, however, the bodies that have been found didn’t have life jackets on, a sign that there was no attempt to make a controlled ditching, Paul Hayes, safety director at London-based aviation consulting company Ascend Worldwide, told the Miami Herald.

If autopsies show death came from blunt-force trauma, it “could suggest passengers were alive upon impact with the water,” Scott Hamilton, managing director of aviation consulting firm Leeham Co., told The Associated Press. Other causes of death might mean there was rapid decompression and in-flight breakup.

Nearly all the passengers and crew are Indonesians, who are frequent visitors to Singapore, particularly on holidays.

Several countries are helping Indonesia retrieve the wreckage and the passengers.

Late Tuesday, the U.S. Navy destroyer USS Sampson, which was dispatched to the area earlier in the day, discovered debris from the plane. The USS Fort Worth, which is in port, is prepared to aid in search efforts if requested, a Navy official said.

A Chinese frigate also was on the way, while Singapore said it was sending two underwater beacon detectors to try to detect pings from the plane's all-important cockpit voice and flight data recorders. Malaysia, Australia and Thailand also are involved in the search.

Although it’s very early in the investigation, Brenner said he saw “striking” similarities between the AirAsia crash and the 2009 Air France disaster, which resulted in 228 deaths after the Airbus A330-203 crashed into the Atlantic Ocean.

In both cases, pilots were struggling with bad weather and had requested to fly up to a pretty high altitude. In the Air France crash, that caused indicators to freeze up, which in turn caused the autopilot to shut down. At that altitude, it’s possible that not enough oxygen can get into the engines, he said.

Brenner also suggested that wind sheer could have pushed the airplane down to the point where the plane’s pilots couldn’t recover, and he didn’t rule out the possibility that pilot error or inexperience may have played a part.

Regardless, what will be a lengthy and painstaking investigation -- relying on clues such as what was said in the cockpit, local meteorological conditions and what was seen moments before the plane vanished from radar view -- has only just begun.