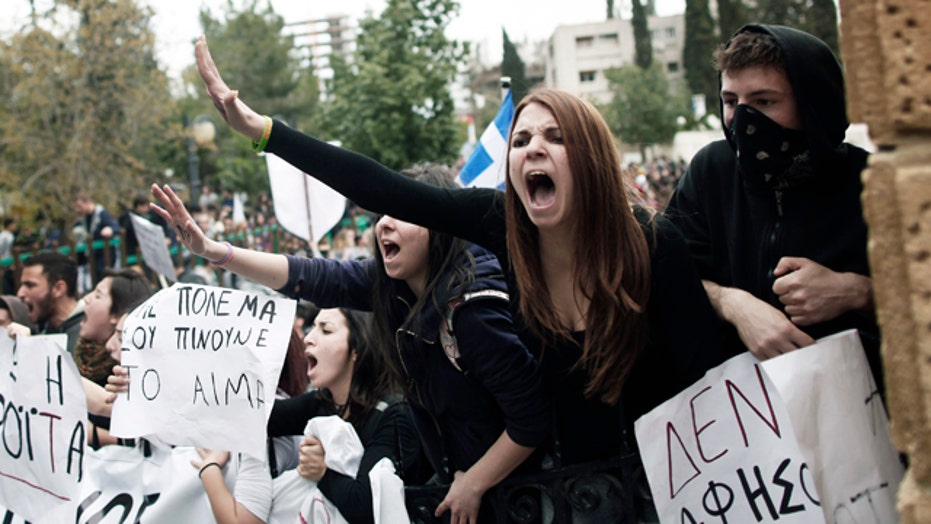 Why should Americans care about Cyprus bailout?

Cyprus’ banks will reopen Thursday after being closed for nearly two weeks, but not without limits on money transfers and withdrawals in a move to avoid a bank run.

Yiangos Demetriou, the head of internal audit at Central Bank, told Cyprus state television Wednesday that residents will be unable to cash checks and can only withdraw up to 300 euros ($383) per day, Reuters reports.

Credit card use will be unlimited on the island, but abroad, residents will only be allowed to spend up to 5,000 euros ($6,400) a month, he added.

The money controls are expected to be formally announced later Wednesday, a finance ministry official told the Associated Press, speaking on condition of anonymity.

The official said banks will remain open from only noon until 6 p.m.

Another banking official said the new controls will include restrictions on large-scale transfers from the country's two largest and most troubled lenders, Bank of Cyprus and Laiki. Both are being restructured and big depositors face losses of as much as 40 percent.

Authorities will allow payroll payments in order to help businesses, which have taken a huge hit as people cut down on their spending amid the uncertainty swirling about the banks.

The restrictions will be kept for at least a week until the situation stabilizes, said the official, who spoke only on condition of anonymity because the measures have yet to be officially announced.

Cyprus's banking sector has grown to nearly eight times the size of the country's economy, mainly on the back of substiantial deposits from Russia. This sparked accusations that the country was being used by Russian criminals to launder their money. Over the past week the Russian government has criticized Europe's handling of the crisis in Cyprus.

Russian millionaire businessman Andrey Dashin told the Associated Press in an interview that he doesn't believe his fellow countrymen would rush to pull businesses or money out of the country once banks reopen, despite the fact that many will take a hit from a tax on accounts over 100,000 euros in both Bank of Cyprus and Laiki.

"There won't be a substantial Russian run" on Cypriot banks, said Dashin, 37, who runs his currency speculation company ForexTime from a brand-new high-rise in the southern coastal resort of Limassol. Dashin doesn't stand to lose on his deposits which aren't in either of the top two Cypriot banks.

"Russians are much more accustomed to such circumstances, we've had so many crisis in Russia...I don't have the feeling that (Russians) are ready to pull out their business or money out of their country," Dashin said.

But he said Russians want to have a "clear picture" on the kind of capital movement limits that will be imposed so as not to choke off businesses, warning that tight restrictions would be "a sign for businesspeople that their cash is trapped."

Dashin dismissed reports that Cypriot banks were being used to launder dirty Russian cash as unproven rumors and urged Cyprus to bring in internationally respected auditors to clear the air.

Meanwhile, private security firm G4S will dispatch 180 of its staff to all bank branches across the island to keep a lid on any possible trouble, said John Argyrou, managing director of the firm's Cypriot arm.

"Our presence there will be for the comfort of both bank staff and clients, but police will also be present," he said.

Argyrou said he doesn't foresee any serious trouble unfolding once banks open their doors because people had time to "digest" what has transpired.

"There may be some isolated incidents, but it's in our culture to be civil and patient, so I don't expect anything serious."

Another 120 staff from G4S would be assigned money transportation duties.

Banks were closed on March 16 as politicians scrambled to come up with a plan to raise 5.8 billion euros ($7.5 billion) that would qualify the country for 10 billion euros ($12.9 billion) in bailout loans from fellow eurozone partners and the International Monetary Fund.

Under the deal clinched in Brussels early Monday, Cyprus agreed to slash its oversized banking sector and inflict hefty losses on large Laiki and Bank of Cyprus depositors.

The board of directors of both banks has been fired and administrators appointed to handle the restructuring and absorption, the banking official said.

"These are very difficult times for everyone. The Bank of Cyprus was and must remain the basic support of the economy and our society in the effort to deal with the crisis our country is going through," Kypris said. "I hope that the handling of this transition phase will respect the workers, shareholders and customers of the Bank of Cyprus."

Cypriot officials said the deal would mean the country would shift its focus away from being an international center of financial services. That is expected to cost jobs, adding to the unemployment rate which now stands at around 14 percent.

Ioannis Kasoulidis told German daily Frankfurter Allgemeine Zeitung in an interview to be published Thursday that dropping the common currency was "a possibility which we seriously considered for a while."

Business leaders and cabinet ministers were meeting with President Nicos Anastasiades on Wednesday to find ways to get the economy going again.

To give consumers a break, electricity prices will drop 5.75 percent next month. Over the next couple of weeks, authorities will look into how they can reduce them by another 3 percent, said Commerce Minister Giorgos Lakkotrypis.

"There has always been interest from foreign investors," said Hasikos. "The question is how we as the government, as Cyprus, can convince all these investors ...that the environment is secure, that whatever happened has now passed and that they can continue securely investing in Cyprus."