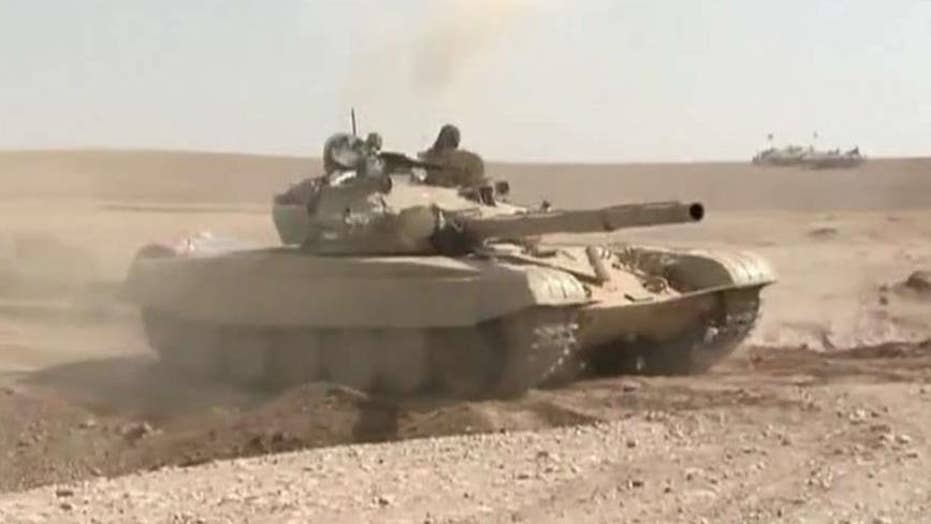 As the highly anticipated assault on the ISIS stronghold of Mosul grinds along, members of the minority Yazidi community wait with grim anticipation to learn the fate of loved ones trapped or enslaved in Iraq’s second-largest city.

Yazidi hostages, sex slaves and even young men brainwashed and conscripted into the black-clad jihadist army are inside the city. And the beleaguered Yazidi community knows those may be the lucky ones.

Guly, (l.), and Murad, (r.), lost everything when ISIS overran their village. Now they subsist with their daughter in a state of homelessness. (FoxNews.com)

“The most important thing now is the hostages,” Baba Chawish, the highest spiritual authority in the Yazidi community, told FoxNews.com. “There is nothing we can do about the dead. We need to take care of the ones still living.”

Yazidis joined Peshmerga soldiers on the front lines early Monday morning as the civilian exodus began, awaiting the return of familiar faces. According to Haitham al-Malaki, head of military intelligence for the Iraqi Army Emergency Response Division (ERD), the survival of potentially thousands of Yazidi sex slaves is of paramount importance. Locations of many have been identified and plans to ensure safe passage are in place, he said.

The Yazidis' holiest site, the Temple of Lalish, lies on the outskirts of Mosul, just miles from the terror army's stronghold. (FoxNews.com)

Yazidis are guarded in their hope. The persecution they suffered for centuries culminated in the rise of ISIS, which made Mosul its Iraqi capital in June of 2014. Two months later, the world watched as the Yazidi villages atop Mount Sinjar were overrun. The community remains skeptical that its members will be given special help or protection by any government.

Earlier this year, the U.S. State Department gave the Yazidis the official designation as victims of genocide – a designation they say has done nothing to help them.

“It hasn’t changed anything. I am on my own, trying to find answers,” one Yazidi man, who asked only to be identified as Omar, told FoxNews.com.

He was not at Sinjar on Aug. 3, 2014, when ISIS marauded its way into the mountain, slaughtering and capturing Yazidis by the thousands and prompting many more to flee to the top where they died of starvation and exposure. Omar has neither seen nor heard from his 18 closest relatives since that day.

Supported from the air by the U.S.-led coalition, Kurdish Peshmerga forces liberated Sinjar and the surrounding villages from ISIS occupation last November, yet the region remains largely unlivable and reminiscent of a haunted war zone. The lone road into Sinjar traces the Syrian border, right up into the coiled road mountain, and is still littered with overturned vehicles, strewn clothing and singed belongings.  Some 22 Yazidi mass graves have recently been unearthed in different locales across the mountainside, with many more likely to be discovered in the coming weeks.

According to Chawish, there are now over 1,000 Yazidi orphans and more than 400,000 of their people remain homeless. Very few are able to return to Sinjar, scores have fled the country as refugees, some are living in displacement camps across the Kurdish region and others are simply finding refuge in abandoned buildings.

While many are hopeful the anticipated liberation of Mosul will bring with it some tearful reunions with freed Yazidi survivors, the community is all too aware that their people will need help, both immediate and long term.

Driving though an array of ravaged villages in northern Iraq, it is common to see Yazidis seeking shelter wherever possible. In one case, a rundown building – where ripped sheets serve as walls – had become home to several elderly and disabled Yazidis.

One occupant, Murad, 70, painfully reconstructed that scorching summer morning ISIS came for them. He was pushing his wife Guly in her wheelchair to collect water when members of the fearsome terror army opened fire. Unable to run, they were captured along with thousands of others and held prisoner in Mosul.

“We were tortured, people died from starvation. They were killing infant babies in front of their mothers,” he told FoxNews.com. “They raped our girls in front of us. I will never forget.”

Guly, previously disabled from what she referred to as a "brain attack" – a stroke – said that ISIS fighters threw away her wheelchair when they kidnapped her. In that first brutal winter of captivity, they were left without blankets or protection from the elements. She forever lost feeling in one hand, and her husband the use of a leg.

As they spoke to FoxNews.com, their young daughter, recently rescued from sex slavery, gently wrapped her frail mom in blankets to cover her legs.

“After six months, they separated the disabled people and put us in a truck. We were dumped at the Kurdish border,” Murad said. “We are grateful for our lives but we have nothing, no medicines and no money. Before this, we had a beautiful quiet life. But they broke us inside.”

With barely enough means for survival, the notion of psychological help is a distant priority that will loom larger if the Mosul operation succeeds. At one displacement camp in Duhok, a 7-year-old boy just rescued after being held and indoctrinated in a jihadist camp, attempted to behead his baby sister with a kitchen knife. He was stopped by his mother. Countless rescued girls have attempted suicide.

One by one, members of the Yazidi community produced documentation to FoxNews.com of the war crimes inflicted upon them, from gruesome “before and after” photos of men beheaded by ISIS, to their grandchildren being burned alive on hotplates, to the young children who succumbed to the heat and starvation while fleeing their ancestral homelands.

Many of the Yazidis refer to their loved ones, who were captured more than two years ago and have not been heard from since, as “still with ISIS.” However, after Mosul is cleared, and answers still not found, many fear that even greater grief and suffering will ensue. Also of grave concern to the community leaders is that with the lack of assistance, many more Yazidis will continue to flee.

“We need protection and help from the international community,” Chawish said. “People will only stay if they know this won’t happen again… Or else we, as Yazidi people, will vanish.”

The Yazedi Human Rights Organization reports that over 800,000 Yazidi lived in their native Iraq, but that number has dropped to below 450,000 today.

Genocidal campaigns against the ethno-religious minority have been a persistent hallmark of their history, although nothing on the scale of the ISIS-led atrocities. The Yazidi religion predates Islam and Christianity, but integrates numerous aspects of Abrahamic faith. Their calendar starts almost a thousand years before the Hebrew one, making it one of the world’s oldest vestigial religions, and due to their worship of a Peacock Angel, hardline Islamic militants like ISIS have justified their killings by referring to them as “devil worshippers.”

In spite of the pending reckoning, last week hundreds of Yazidis – many traveling from the increasing Diaspora scattered around the world – traveled to their holiest site, the Temple of Lalish, on the outskirts of Mosul for their annual pilgrimage, held every October. The event served as something of a modest, but not melancholy, commemoration of their resilience in the face of evil.

The crooked, ancient cobblestone streets of Lalish were ablaze with bright colors as families slept out on the roof tops under the still warm fall skies, market stalls were set up selling traditional goods, hundreds wandered barefoot to kiss the primordial trees, which they date back to Eden, and several took turns to enter their sacred White Spring to be baptized. For many – even adults – this marked the first time they had ever even been able to make the roughly three-hour journey between Sinjar and Lalish, the first time they have been baptized in their holiest of waters.

“Many people from Sinjar are very poor and they lived their lives very happy, but very poor,” said one young Yazidi, Baxtiar Baadri, exuding a quiet pride as a middle aged man stepped inside the sacred spring. “He became a big man not yet baptized – but today for him that changes. And if there is hope for one Yazidi, there is hope for us all.”