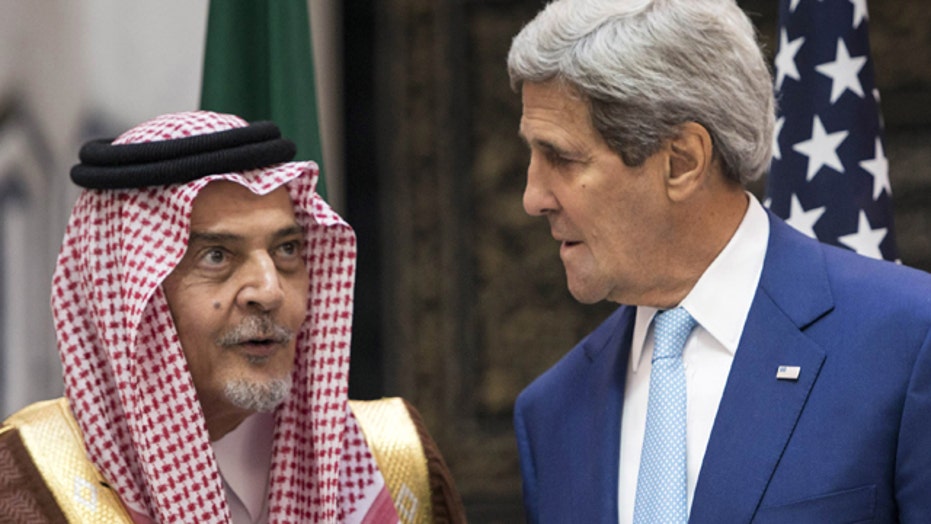 Can US trust Arab allies to fight against ISIS?

While the U.S. works to coordinate which Arab nations are willing to provide military resources to fighting the terror group ISIS, regional powers are asking for a stronger American commitment, according to The Washington Institute’s Andrew Tabler.

Tabler, author of “'In the Lion's Den: An Eyewitness Account of Washington's Battle with Syria” told FoxNews.com Arab countries are looking to the U.S. to help organize Syrian rebels opposing ISIS.

He believes the U.S. will eventually establish a coalition, but cautions “how effective it will be remains to be seen for a variety of reasons that not only have to do with ISIS, but the complexities of the Syrian Civil War.”

There is growing concern over how the U.S. could determine which Syrian rebel groups the West should coordinate with to arm and train against ISIS.

“We’ve been working covertly with the Syrian opposition for a few years; it’s kind of an open secret,” said Tabler. “We’ll have to wait to see how effective that will be and that’s where there are a lot of question marks because moderates have suffered … after President Obama walked back from enforcing the ‘red line’ about a year ago on the regime’s use of chemical weapons.”

By the U.S. providing an “organizing role” in the region, this he believes could reassure American allies that Syrian President Bashar Assad won’t be able to reassert control over the entire country if ISIS falls.

“What they want from us is coordination and a lot more work on arming the Syrian rebels. I think it seems right now they are going to get it,” said Tabler.

Saudi Arabia’s support is seen by analysts as crucial for the White House’s plan for expanded action against the terrorists.

This is proving controversial as the Saudi government in the past has denied funding or backing groups tied to ISIS even though they’ve provided weapons to Sunni militants fighting in Syria.

Tabler says the U.S. might rely heavily on the Saudis. “Writing the checks, providing the bases, maybe even providing some soldiers … that would be something very new for Saudi Arabia. They usually prefer to throw money at a problem, but they are not going to be able to defeat ISIS … more than something they’ve done in the past."