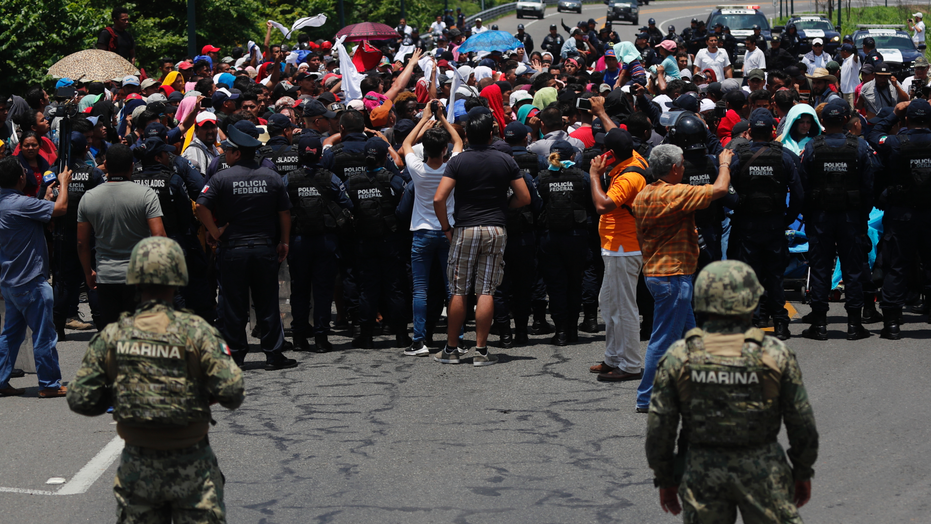 The Mexican government announced Friday that the number of migrants coming to its border with the U.S. had dropped by 56 percent over the past three months as the country tries to avert President Trump's threatened tariffs on Mexico's exports to its northern neighbor.

Foreign Secretary Marcelo Ebrard, citing data from U.S. Customs and Border Protection (CBP) said the number of migrants apprehended at the frontier in August was 63,989 in August, down from 146,266 in May. Those numbers included people who presented themselves at U.S. ports of entry and were deemed inadmissible.

The Mexican government has deployed more than 20,000 police officers and National Guard troops across the country as part of an aggressive campaign meant to deter Central American migrants from passing through its territory en route to the United States. Ebrard said there had been seven formal complaints of human rights violations involving the National Guard, a relatively low number which he saw as another sign of success.

The U.S. and Mexico agreed in June to a 90-day window to allow Mexico to reduce the flow of migrants from Central America to the U.S. The agreement averted plans by Trump to impose a five percent tariff on Mexican goods in the U.S. that would have increased every month until it hit 25 percent.

Ebrard, is scheduled to meet with U.S. officials at the White House Tuesday to review the Mexican government's progress.

"We're showing that the strategy that Mexico put forward has been successful," Ebrard told reporters. "I don't expect a tariff threat Tuesday because it wouldn't make sense."

Despite the apparent progress in stopping illegal migration, Ebrard repeated his government's refusal to become a so-called "third country,' as Trump has proposed. That would require migrants seeking asylum in the U.S. to apply for such protections in Mexico instead.

"The Mexican strategy is working," said Ebrard, according to Agence-France Press. "We will not agree to be a safe third country ... because it goes against our interests. It is unfair to our country."

Trump has not yet responded to the latest figures, but on Wednesday he seemed very pleased by Mexican efforts. "I want to thank Mexico, the Mexican government, their great President of Mexico, for helping us," he told reporters. "They're helping us in a very big way. Far bigger than anybody thought even possible."

In addition to stopping U.S.-bound migrants, Mexico said it has been targetting smuggling networks, which it blames for instigating large migrant caravans bound for the U.S. which popped up earlier this year. Authorities have raided freight trains that migrants ride north, and pulled thousands off buses and out of the freight compartments of trucks. The government has warned bus and taxi drivers they could lose their permits if they transport migrants.