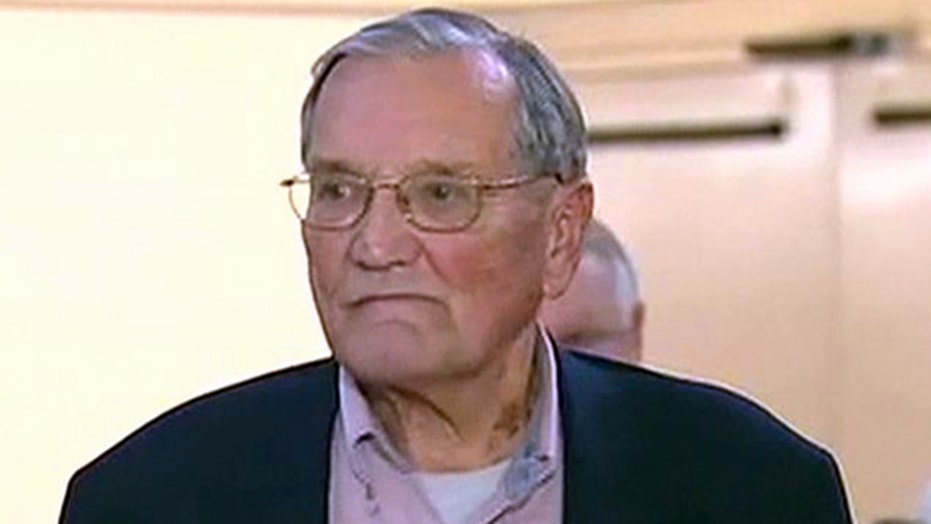 An 85-year-old U.S. tourist detained in North Korea for more than a month for alleged hostile acts has landed in San Francisco after catching a flight from Beijing.

North Korean state media said Saturday that Merrill Newman, a war veteran, was released because he had apologized for his alleged crimes during the Korean War and because of his age and medical condition.

He was joined by family members at San Francisco International Airport and spoke briefly to the media. He said he was happy to be home, but tired.

Earlier, Newman was met by U.S. embassy staff in Beijing. He is currently on a United Airlines flight flying over the Pacific and is expected to land in San Francisco at 11:59 a.m. ET, KTVU.com reported.

His detention only increased diplomatic tensions and was culminated when North Korea released a video of him reading a confession to war crimes. It was not clear if his confession was coerced.

He was taken off a plane Oct. 26 by North Korean authorities while preparing to leave the country after a 10-day tour.

Vice President Joe Biden, who is currently in South Korea on a three-nation Asian tour, praised North Korea for releasing Merrill and said he played "no direct role" in securing the veteran's release.

Biden said he talked by phone with Merrill and offered him a ride home on Air Force Two, but said the Palo Alto, Calif. resident decided to take a direct flight to San Francisco, so he could return home more quickly.

"As he pointed out, there's a direct flight to San Francisco, so I don't blame him, I'd be on that flight too," Mr. Biden said.

Newman's son, Jeffrey, said he spoke briefly with his father from Beijing and that he was "in excellent spirits and eager to be reunited with his family."

"As you can imagine this has been a very difficult ordeal for us as a family, and particularly for him," he said in a statement read outside his home in Pasadena, adding that they will say more about this unusual journey after Newman has rested.

State Department spokeswoman Marie Harf urged Pyongyang to pardon "as a humanitarian gesture" another American, Kenneth Bae, who has been held in the North for more than a year.

"We are pleased that Mr. Merrill Newman has been allowed to depart the (Democratic People's Republic of Korea) and re-join his family," Harf said in a statement after Newman's release. "We welcome the DPRK's decision to release him."

Bae's family, who live in the Seattle area, said Friday that they welcome Newman's release.

"We have been praying for him and are very happy that his family will have him at the head of their table for the holidays,'' family said in a statement, according to Reuters. "We believe that our Kenneth should also come home soon.''

Over the weekend, Newman's family released a statement, saying the State Department had informed them that the Swedish ambassador to North Korea visited Newman at a Pyongyang hotel Saturday and reported he was in good health.

Pyongyang has been accused of previously coercing statements from detainees, and the four-page statement Newman read was riddled with stilted English and grammatical errors, such as "I want not punish me."

"I have been guilty of a long list of indelible crimes against DPRK government and Korean people," Newman purportedly wrote, adding: "Please forgive me."

The statement, carried in the North's official Korean Central News Agency, said the war veteran allegedly attempted to meet with any surviving soldiers he had trained during the Korean War to fight North Korea, and that he admitted to killing civilians and brought an e-book criticizing North Korea.

Newman "masterminded espionage and subversive activities against the DPRK and in this course he was involved in killings of service personnel of the Korean People's Army and innocent civilians," North Korea's official KCNA news agency said, according to Reuters.

"He admitted all his crimes and made an apology for them," the news agency was quoted as saying.

During the war, Newman trained a group of partisan fighters known as the 'Kuwol Regiment,' or 'Kuwolsan' in Korean, according to a former member of that regiment, Reuters reported.

It was one of several groups of anti-communist partisans under the command of the U.S. Army 8240th Unit -- dubbed the 'White Tigers' -- which coordinated some of the most daring missions of the Korean War. The White Tigers reportedly embedded undercover agents deep in enemy territory and spied on and disrupted North Korean operations, according to documented histories of the regiment.

North Korea remains technically in a state of war with the South and with the U.S. because the war ended with a truce, not a peace treaty.

Before him, North Korea has detained at least six Americans since 2009.