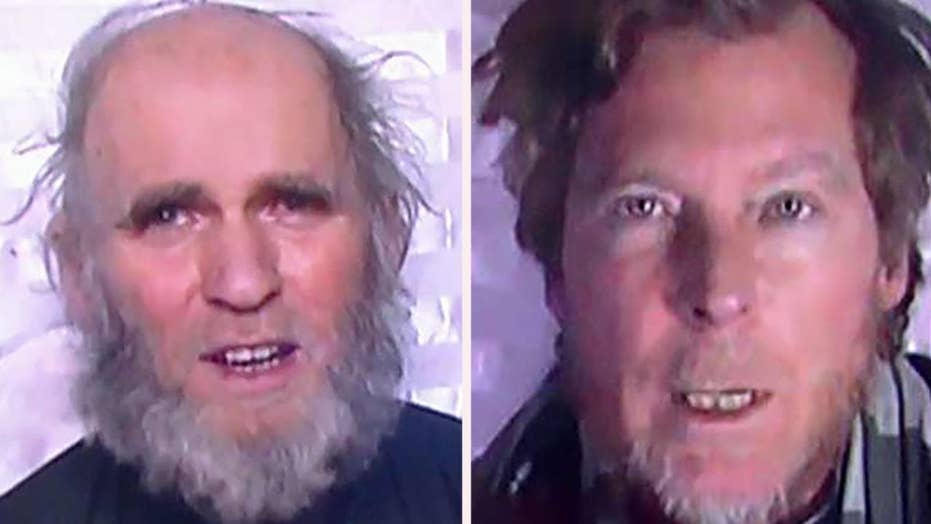 An American professor and Australian professor have been released by the Taliban after being held for more than three years in Afghanistan.

An American and an Australian who were freed by the Taliban Tuesday after three years in captivity are receiving treatment at a U.S. military hospital in Germany, officials said.

King, 63, and Weeks, 50, were then taken to the nearby Landstuhl Regional Medical Center where they will stay for some time for medical evaluations and a reintegration process.

A Taliban statement that followed the swap – which freed the younger brother of Sirajuddin Haqqani, the head of the Haqqani network – called the exchange a "confidence-building measure" that could help bring an end to Afghanistan's endless war.

King and weeks were abducted at gunpoint outside the American University in Kabul where they worked as teachers. The U.S. State Department said after their release that King and Weeks would both soon be reunited with their families.

2 US SERVICE MEMBERS KILLED IN CHOPPER CRASH IN AFGHANISTAN

Australian Prime Minister Scott Morrison wrote on Twitter that Weeks' family had "asked the Australian government to convey their relief that their long ordeal is over, and their gratitude to all those who have contributed to Tim's safe return."

Grenell told Fox News that he had presented King with an American flag when he met him at Ramstein and told him that "we never forgot about you."

Grenell said King then told him: "I know that, and that is what sustained me all these years."