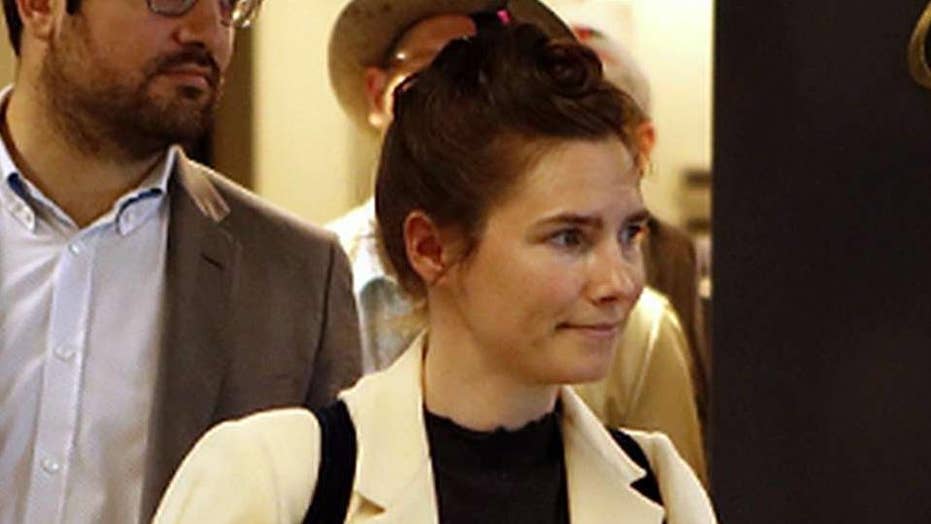 Knox set to attend a conference on criminal justice where she will participate in a discussion entitled 'Trial by Media'; Ryan Chilcote reports.

Amanda Knox returned to Italy Thursday for the first time since she was acquitted of the 2007 murder and sexual assault of her British roommate Meredith Kercher.

Knox, 31, was swarmed by paparazzi and journalists as she arrived at Milan’s Linate airport. She is headed to the northern city of Modena where she was invited by the Italy Innocence Project to speak on a panel about wrongful convictions this Sunday.

A somber Knox looked down as officers escorted her and her fiance out of the airport.

Amanda Knox is approached by a journalist upon her arrival in Linate airport, Milan, Italy, Thursday, June 13, 2019. (AP Photo/Antonio Calanni)

The Seattle native was invited last month to appear at the weekend conference where she will speak at an event on "trial by media," and the role of the media in judicial errors.

In an essay published by Medium Wednesday, Knox called her trip a “homecoming” before adding that “no word” seems to accurately describe it. In it, she discusses how the most intimate details of her life were spotlighted by the media during her trial and how she continues to be a content source for others.

“The mistakes of the Italian judicial system and the ravenous appetite of a media that does not distinguish between a person’s life and clickworthy content pushed me into the public sphere,” she wrote.

Amanda Knox hides her face from the cameras as she sits in a car after her arrival in Linate airport, Milan, Italy, Thursday, June 13, 2019. (Daniel Dal Zennaro/ANSA via AP)

AMANDA KNOX IS ENGAGED TO BOYFRIEND AFTER ELABORATE SPACE-THEMED PROPOSAL

Knox and her former boyfriend, Raffaelle Sollecito, were initially convicted in 2009 of Kercher's slaying in the hilltop university town.

The 21-year-old British student was found in their apartment nude under a blanket, with her throat slit.

Knox was subsequently acquitted in 2011 on appeal after spending four years in custody and immediately returned to Seattle. The murder conviction was reinstated in 2014, but she was finally, definitively acquitted in 2015 by Italy's highest court. Another man, Rudy Guede, who was arrested and convicted separately is currently serving a 16-year prison sentence.

Their convictions were annulled by the country's highest court in 2015 after a yearslong legal battle. Judges in that final ruling cited flaws in the investigation and said there was a lack of evidence to prove their wrongdoing beyond a reasonable doubt, including a lack of "biological traces" connecting them to the crime.

Knox was also awarded $20,000 in damages this year after The European Human Rights Court in Strasbourg, France, found that the government had failed to provide legal assistance and a translator during a long night of questioning after Kercher's slaying.

The only person to have been convicted of Kercher's murder is an Ivorian immigrant, who is now serving a 16-year sentence for the killing.