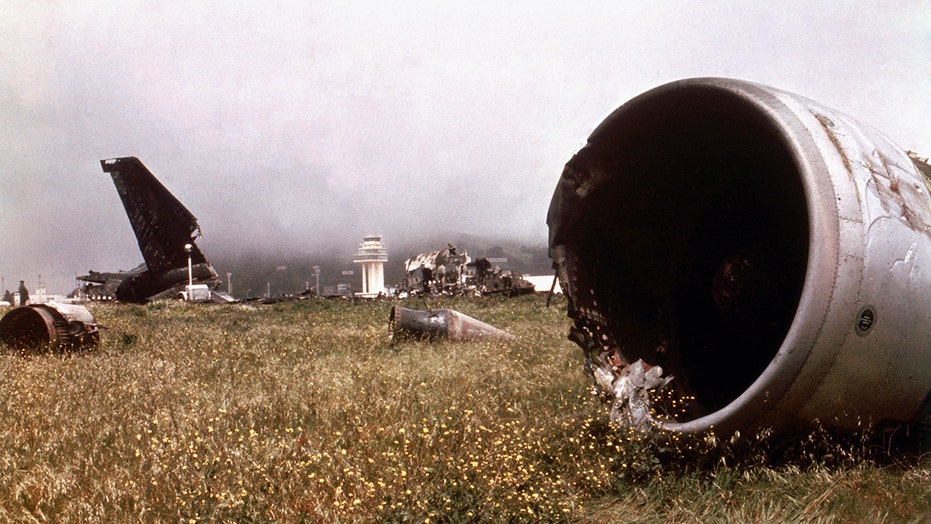 A number of passenger planes have been downed throughout world history as a result of mechanical failures and human error.

Ranging from mid-air collisions to cargo doors inadvertently falling off, here are five of the deadliest air disasters not directly caused by terrorism, suicidal pilots or other nefarious means:

Hundreds were killed during a foggy day on the Spanish island of Tenerife in March 1977 after two Boeing 747’s collided on the runway of Los Rodeos Airport.

Part of the wreckage of the two Boeing 747s which collided on the runway in Tenerife, killing 583 people .

KLM Flight 4805 and Pan Am Flight 1736 had been diverted there because of a bombing at an airport on the nearby island of Gran Canaria.

According to the Federal Aviation Administration, Spanish investigators concluded the KLM captain tried to take off “without clearance” and kept the plane accelerating despite learning the Pan Am aircraft was in front of him.

The ensuing collision killed all 248 passengers and crew onboard the KLM flight and 335 in the Pan Am plane. Sixty-one people in the latter jet managed to survive.

More than 500 people died on Aug. 12, 1985, when Japan Airlines Flight 123 plunged from the skies shortly after taking off from Tokyo.

A retaining wall in the aircraft’s rear had ruptured, making it hard to control the plane, the FAA says. The failure was blamed on an improper repair made years earlier, causing the barrier to crack over time.

Despite the difficulties, the plane managed to stay in the air for a half-hour before crashing into the rugged terrain in Gunma Prefecture. Only four onboard survived.

A cargo plane and passenger jet collided in the air 60 miles west of New Delhi on Nov. 12, 1996, killing all on board.

The disaster was blamed on pilot error, as those behind the controls of Kazakhstan Airlines Flight 1907 – a cargo plane – descended 500 feet lower than authorized, striking the ascending Saudi Arabian Flight 763, according to The Telegraph. Both planes then fell out of the sky.

"We noticed out of our right-hand [side of the plane] a large cloud lit up with an orange glow, from within the clouds," the pilot of a U.S. Air Force transport plane, which was bringing supplies to the embassy in New Delhi, said in news reports at the time. "The glow intensity of the cloud became dimmer and the two fireballs descended and became fireballs on the ground."

Turkish Airlines Flight 981 crashed shortly after taking off from Paris, France on March 3, 1974.

A cargo door in the rear of the plane broke off, leading to a sequence of mechanical failures that impaired the flight controls so much that it became “impossible for the crew to regain control of the aircraft,” the FAA says.

The door came apart because it wasn’t closed correctly before takeoff, investigators found.

A fire that broke out on Saudi Arabian Flight 163, on August 19, 1980, ended up killing everyone onboard.

Crew members attempted to fight the blaze as the plane turned around and landed in Riyadh, but instead of making an emergency stop after touching the tarmac, the plane “taxied off the runway to a taxiway,” the FAA says.

The engines weren’t shut off until minutes later -- but by that time, the flames and smoke claimed the lives of all 301 passengers and crew, and an evacuation never occurred.

The fire’s source, according to The Telegraph, is believed to be two butane stoves found within the plane’s cargo.