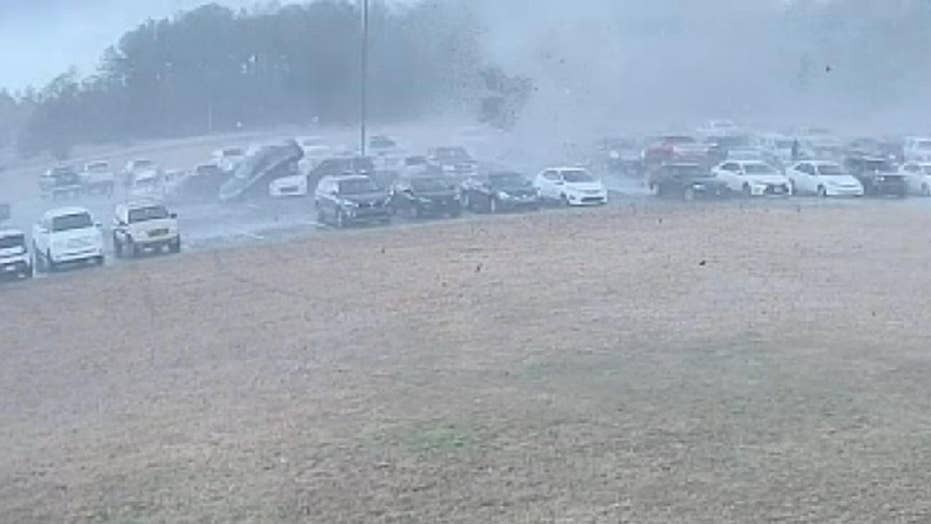 Students at a high school in South Carolina were forced to take cover inside as a tornado swept through a parking lot on Monday, damaging dozens of vehicles.

According to the National Weather Service in Wilmington, N.C., the tornado traveled through the parking lot of Loris High School in Loris, S.C., around 12:45 p.m. Monday, packing winds of up to 90 p.m. as it traveled on a path just over a mile long.

The twister came after a weekend where severe weather was blamed for 11 deaths nationwide.

The tornado developed near the school's football field, flipping a trailer before moving toward the main parking lot, where it tossed around several vehicles.

Video from a security camera at the school shows the twister lifting up and turning over several cars in the parking lot as it moved along its mile-long path.

A tornado can be seen flipping cars in the parking lot of a high school in South Carolina on Monday. (Loris High School via Storyful)

Officials told WFXB-TV that about 72 cars and a mobile home were seriously damaged as the tornado bore down on the school.

No injuries were reported, but the damage was estimated to be in the tens-of-thousands of dollars.

South Carolina State Guard called in to help after an EF-2 tornado touched down in Kershaw County.

Leroy James, who owns a towing company and towed several damaged cars from the lot, told WPDE-TV his granddaughter was taken by surprise because no tornado warning was issued.

"She was frightened. She was scared. She was tore up. She didn't know what was going on, you know all the stuff that happens in school now," he told the television station. "They thought somebody was shooting or beating windows out of cars and stuff. It was just scary when I got that phone call yesterday. It frightened me, too."

Another high school in South Carolina sustained "considerable damage" after an EF-2 tornado struck over the weekend.