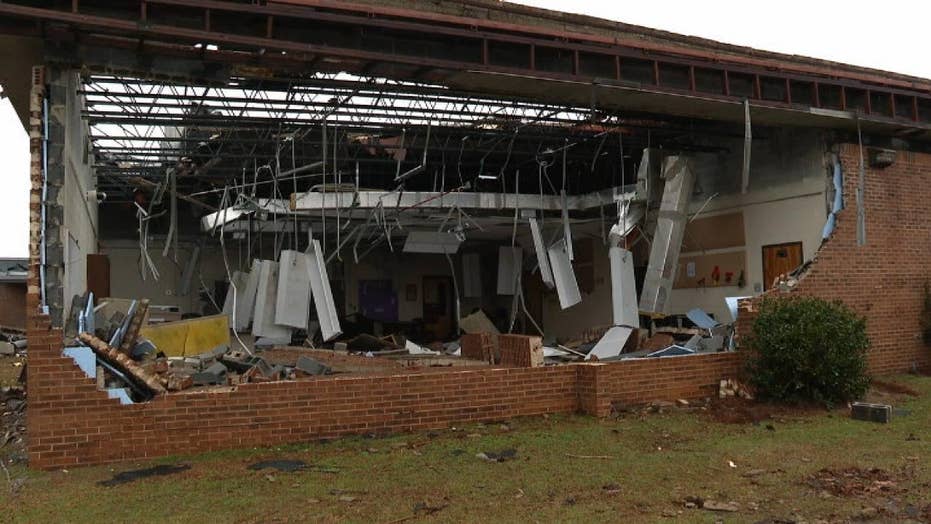 South Carolina State Guard called in to help after an EF-2 tornado touched down in Kershaw County.

It only touched down on the ground for a short amount of time, but a tornado still managed to do "considerable damage" to a high school in South Carolina over the weekend.

The National Weather Service in Columbia, S.C., said the EF-2 tornado struck North Central High School in Kershaw County around 10:30 p.m. on Saturday as a system blamed for 11 deaths nationwide hit the region.

"When I walked through it was like a war zone. I couldn’t believe all the damage," South Carolina State Guard Second Battalion Commander Jason Ross told FOX46 on Monday. "We haven't seen something like this in a long time."

Forecasters said the tornado with estimated winds of 130 mph touched down at an intersection near the school before traveling northeast through the campus. It lifted a half-mile later beyond a parking lot. The twister, which did not injure anyone, was about 150 yards wide, according to the NWS.

Damage at North Central High School in Kershaw County, South Carolina can be seen after an EF-2 Tornado moved through on Saturday. (NWS Columbia)

Storms were moving through the area at the time at between 50 and 55 mph, meaning the tornado likely was on the ground for less than a minute, according to WLTX.

It managed to create "considerable damage" to the school grounds, including snapping numerous trees and partially collapsing concrete stadium bleachers and a press box.

"The tornado continued across the gymnasium, lifting all the HVAC units off the roof," the NWS said in a damage survey. "The tornado then lifted most of the roof off of the main office and an older auditorium then collapsed the exterior wall along a portion of the west side of the building."

As it traveled through the high school campus, the twister moved four school buses and damaged another 20 to 30, before it damaged areas near sports fields.

The tornado caused "considerable damage" after touching down around 10:30 p.m. on Saturday, but no injuries were reported. (NWS Columbia)

On Monday, the South Carolina State Guard was called in to help secure the scene.  "Something like this is a big blow to the community,” Ross told FOX46.

The school is now roped off and will be closed probably for the rest of the year due to "extensive damage," according to Doug Bouling with Kershaw County Schools.

"We're going in and trying to salvage as much equipment and data as we can so we can move it to our alternate location,” Bouling said Monday. "This is going to be a long recovery. We're going to have a significant amount of refurbishing. Some of it might have to be torn down and rebuilt."

The district said that it is in the process of turning another building into a temporary high school for the students and that they will have class as scheduled Wednesday.