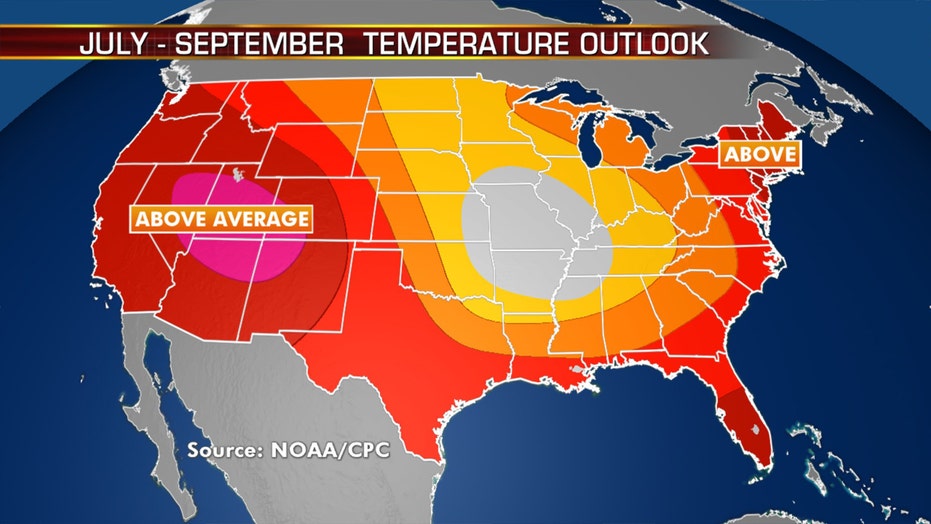 The heat won't be going anywhere for the rest of the summer.

Above-normal temperatures are likely to stick around from July to September across the West, Gulf Coast states and along the East Coast, according to a recent forecast by the National Oceanic and Atmospheric Administration (NOAA).

Last month, forecasters said parts of the Midwest would have normal temperatures this summer.  But in the most recent outlook, that appears to have shrunk to the mid-Mississippi Valley area.

Above-normal temperatures are expected out West, along the Gulf Coast, and the East through September 2020. (Fox News)

In terms of precipitation, the NOAA said above-normal precipitation is likely for southern regions of Alaska, in addition to much of the eastern U.S. and the Midwest into the Southeast and Gulf Coast.

Above-normal precipitation is also forecast for the Midwest into the Southeast. (Fox News)

The Pacific Northwest and the central Rockies are expecting to see the opposite, with below-average amounts of precipitation this summer.

Lack of precipitation, combined with heat, may fuel wildfires in the months ahead out West.

Last month, forecasters from NOAA said there's a 60 percent chance of an above-normal hurricane season, which officially started on June 1 and runs until Nov. 30.